Obamacare's long November: Why Democrats need to be aggressive in promoting the ACA 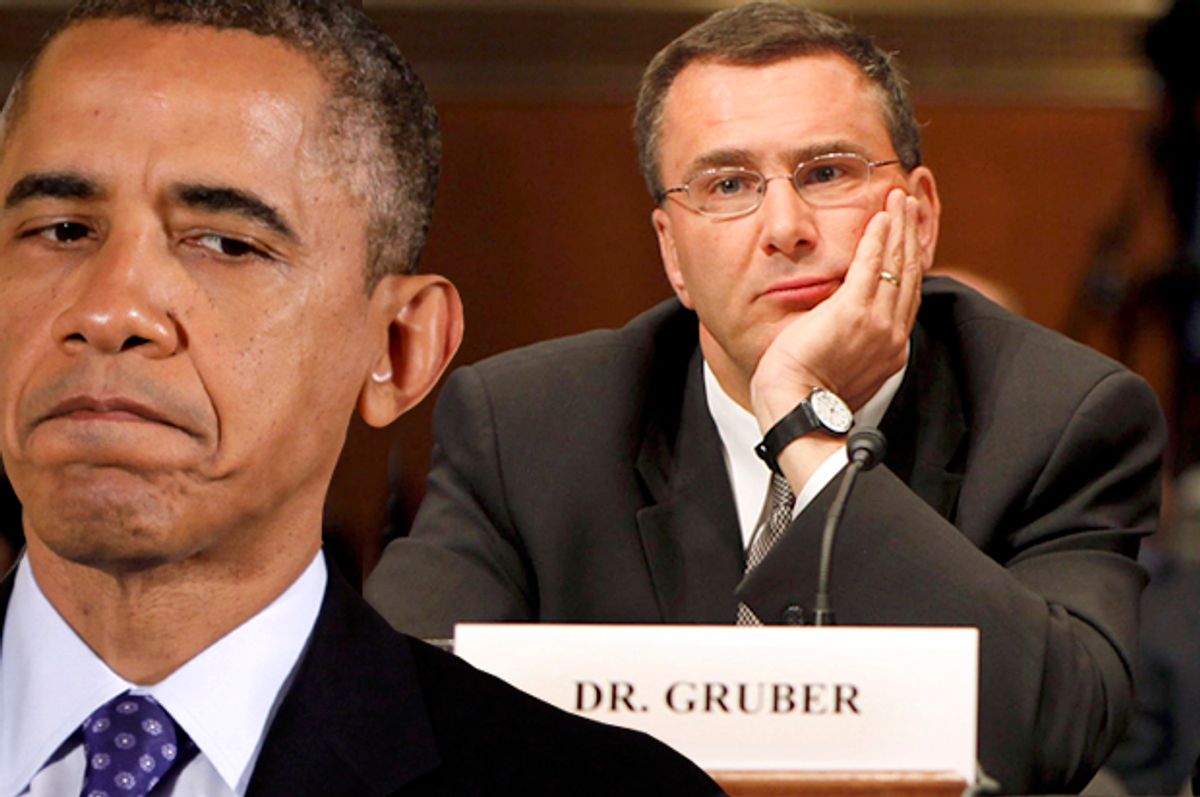 It feels safe to say that the Affordable Care Act has had better months. The first week of November saw a wave of politicians elected to Congress who want to kill it dead. The second week saw a BREAKING NEWS conflagration over Jonathan Gruber’s dimwitted comments about the law's passage being rooted in the stupidity of voters. The third week brought news that the Department of Health and Human Services padded ACA enrollment figures with hundreds of thousands of people who’d signed up for dental plans only. And the fourth week witnessed Chuck Schumer, one of the Senate’s most prominent Democrats, call the law’s passage a political miscalculation.

That’s a lot of negative PR crammed into one month. And while these stories all make the law look bad, some are more significant than others. “Grubergate” is an overblown mess of a story that is more about the stale political debate over Obamacare than the law itself. The dental plan fiasco, however, cuts right to the credibility of the law’s administrators. HHS secretary Sylvia Burwell said that the addition of dental plan-only enrollees to the total enrollment figures was an accident, but nonetheless unacceptable. And she is absolutely correct – the “error” accounted for a 6 percent increase to the total. It’s also worrisome that Burwell dodged when asked by MSNBC’s Chris Hayes if the matter would be investigated.

And then there’s Schumer. “Democrats blew the opportunity the American people gave them,” the New York Democrat said this week at the National Press Club. “We took their mandate and put all our focus on the wrong problem – health care reform.” What was striking about Schumer’s remarks was the blunt cynicism that animated his argument for why health care reform was the “wrong problem” – it wouldn’t win the party any votes. “The Affordable Care Act was aimed at the 36 million Americans who were not covered,” he said. “It’s been reported that only a third of the uninsured are even registered to vote. In 2010 only about 40 percent of those registered voted. So even if the uninsured kept with the rate, which they likely didn’t, you would still only be talking about five percent of the electorate. To aim a huge change and mandate at such a small percentage of the electorate made no political sense.”

This really isn’t the message the Democrats should embrace going forward. If the past month has shown anything, it’s that the ACA remains extraordinarily vulnerable to self-reinforcing bad news cycles – a negative story pops up, conservatives attack, Democrats retreat, and so on and so on. Let this rough month be instructive. Running away from the ACA and dancing around it has proven to be a political loser, so perhaps try a new tactic for 2015: embrace the health law that you’re going to be tied to anyway and actually make an effort to show people how it’s doing the job it was intended to do.

I’ve made this argument before, and I’ll probably have to make it again. The ACA is lowering the uninsured rate, increasing access to health care, and – in an almost unheard-of development for a modern piece of landmark legislation – decreasing economic inequality. Conservative governors of Republican states have embraced the Medicaid expansion, one of the law’s key provisions. There’s plenty of room to cobble together a strong pitch for the law’s virtues.

And there’s plenty of incentive, too. A big reason that Democrats scurry away from the ACA is that its approval ratings remain poor. This too becomes a self-reinforcing cycle – no one is apt to warm to the law if the people who passed it are wishy-washy when it comes to defending it.

Another reason the public holds a dim view of the ACA is that, even after four years on the books, there’s still a lot of confusion as to what it actually is. A sustained torrent of conservative and Republican misinformation about the law has led people to believe that it extends coverage to undocumented immigrants and will facilitate the euthanasia of their elderly relatives. But there’s research that shows that once people gain a better understanding of what the ACA is (and, just as important, what it isn’t), their approval goes up. “Democrats understood the most and liked the law the most, independents less, and Republicans understood still less and liked the law the least. However, attitudes were not just tribal. Within each party, the more accurate your knowledge of the law, the more you liked it.”

As it stands, the law’s successes (blandly defined as “working as it should”) are easily overtaken by negative stories that feed into the existing media narrative of a troubled law that will poison Democratic electoral chances in perpetuity. Because Gruber/dental plans/Schumer so easily dominated the news cycle, you’d hardly know that ACA enrollment this month has been brisk, and that nearly half of the people who’ve signed up thus far were previously uninsured.

Perceptions need to be altered. Obama has shown a tendency for boldness in his post-midterm agenda, so he might consider devoting a substantial chunk of his upcoming State of the Union Address to the ACA successes. Invite a few people to the White House whose lives were saved because they gained access to health care. Make a big show of it, demonstrate to the country that people's lives are improving as a direct consequence of the Affordable Care Act. That will require Democrats to show a little spine and a little pride in their legislative efforts. Otherwise they’re guaranteed to stumble through many long, lonely Novembers.