GOP's fake new makeover: How the media sat down on the job in 2014 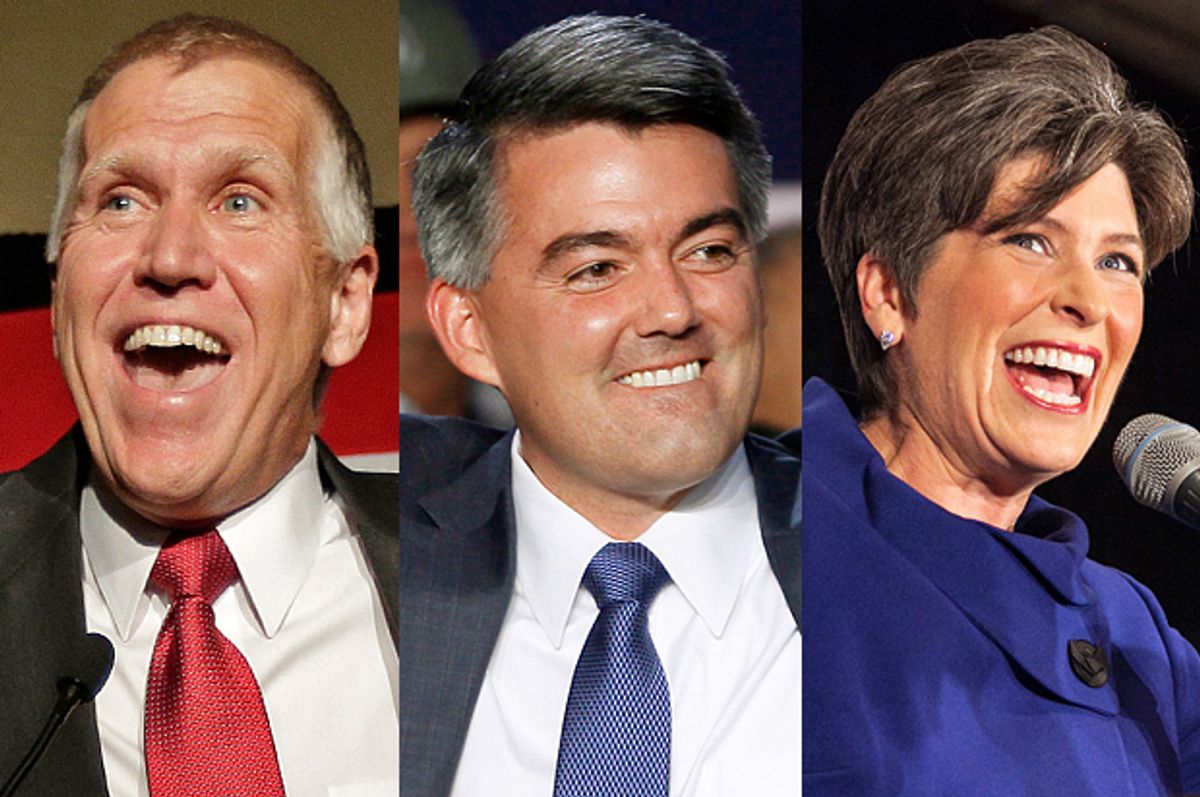 2014 was bound to be a difficult year for Democrats.

History suggested nothing less. The incumbent president's party almost invariably loses congressional seats in midterm elections, and the six-year itch was always going to be difficult for Democrats to overcome. Moreover, the Senate map was especially unforgiving; 21 Democratic-held seats, including seven in states won by Mitt Romney, were up, against just 15 GOP seats, only one of which (Maine) was in a state President Obama carried in 2012. Given that the GOP only needed to net six seats to capture control of the chamber, the party's ultimate triumph hardly counts as an upset.

So a Republican Senate takeover was always more likely than not; history and simple arithmetic could lead you to no other conclusion. Claims that bolder presidential proclamations or a more sympathetic news media could have turned the tide, therefore, merit a healthy dose of skepticism.

Nonetheless, it bears noting that the mainstream political press corps all but abdicated its responsibilities this year. Unlike 2010 and 2012 -- when media coverage exposed the lunacy of Christine O'Donnell, Ken Buck, Sharron Angle, Richard Mourdock and Todd Akin -- reporters gave free passes to equally fringe candidates this year, taking care not to draw too much attention to the hard-right views espoused by some of the GOP's star recruits.

But why? In short, the media picked their 2014 narrative and stuck to it -- the facts be damned.

That narrative, of course, held that 2014 marked the victory of the GOP establishment over the undisciplined rabble-rousers of the Tea Party faction. Superficially, this narrative makes some sense. 2010, after all, witnessed the GOP convention defeat of Utah Sen. Bob Bennett and the primary defeats of the GOP's favored candidates in Delaware, Colorado and Nevada. Two years later, Indiana Republicans ousted longtime Sen. Richard Lugar in favor of Mourdock, while Missouri GOP voters nominated Akin over John Brunner and Sarah Steelman, two candidates supported by party graybeards. In each case, the GOP lost winnable races to Democratic opponents -- and Republicans resolved not to repeat history this year; Senate GOP leader Mitch McConnell, for instance, memorably vowed to "crush" anti-establishment primary challengers. The effort met with remarkable success; not a single GOP incumbent went down to defeat in a primary this year, while the establishment got its candidates in crucial battlegrounds like Alaska, North Carolina, Iowa and Colorado.

Politico's Alexander Burns summarized the conventional wisdom when, just before Election Day, he uncritically transcribed GOP strategists' view that big congressional gains for the party would "represent a top-to-bottom validation of their party’s mainline wing."

"The distinctly different flavor of the 2014 Republican class is partly a product of calmer national atmospherics," Burns wrote, as if the GOP's cynical fear-mongering over Ebola and the Islamic state never happened. "A few years removed from the post-2008 economic panic and the red-hot tea party anger over the passage of the Affordable Care Act, there’s been more maneuvering room in 2014 for candidates with calmer dispositions and more traditional political résumés."

Similarly, in a September analysis for the Week, W. James Antle III declared that whether the GOP won or lost, the returns would be a verdict on the Republican establishment: "If Republicans retake the Senate, it will certainly be a feather in the establishment's cap," Antle wrote.

Retake the Senate they did, thanks in large part to the victories of GOP "establishment" candidates in three purple states. Each case illustrates the deep flaws in the story line of a more chastened, sober GOP, and underscores the radicalization of the party in the Obama era.

Arguably the most egregious case is Iowa, where GOP Sen.-elect Joni Ernst scored an 8.5 point victory over Democratic congressman Bruce Braley in the race to succeed retiring Democratic Sen. Tom Harkin. Ernst managed to garner support among both Tea Party and establishment types in her GOP primary bid, prompting the Atlantic's Molly Ball to herald the rise of the so-called "fusion Republican." To be fair, it's not a bad description -- if only because Ernst is an exemplary case study in how the Tea Party right now dominates the "mainstream" GOP. But while voters may have known all about Ernst's biography as a hog-castrating, down-home Iowa farm girl, they'd have been hard-pressed to identify her extreme views on the issues. (Indeed, polling showed that voters actually preferred Braley's positions to Ernst's.) Beltway reporters largely overlooked Ernst's scary worldview -- her support for arresting federal officials who implement Obamacare, her belief that there's a secret United Nations plot to take over Iowa farmers' land, her claim that Obama has become a "dictator" who may deserve impeachment, and her paranoid statement that she keeps a gun in case the government "decides my rights are no longer important" -- in favor of talking up her "popular charisma" (Luke Russert) and her "compelling biography" (Nia-Malika Henderson). She may have sounded no different than Sharron "Second Amendment Remedies" Angle, but she was a bright new face! A rising star! Living proof that the GOP is just fine on women's issues!

Colorado congressman Cory Gardner benefited from similarly glowing coverage. As he launched his ultimately successful challenge to Democratic Sen. Mark Udall, Gardner opportunistically abandoned his support for a state-level "personhood" amendment that would have banned abortion and some forms of contraception -- but he continued supporting federal personhood legislation, dishonestly asserting that the measure was merely a symbolic statement that he "supports life." Udall went after Gardner hard on reproductive issues, but rather than hold the congressman accountable, the media preferred instead to ridicule "Mark Uterus" for running, in the words of the Denver Post editorial board, an "obnoxious one-issue campaign." Endorsing Gardner, the Post lauded the GOP up-and-comer as an antidote to partisanship and Washington gridlock -- ignoring his support for 2013's Tea Party-led shutdown, a voting record that places Gardner to the right of Michele Bachmann, and his boastful ignorance on climate science. Sure, Gardner may be every bit the extremist Bachmann is, but he's "cherubic and ebullient," a Republican who puts a "fresh" face on the GOP's retrograde views. And now you can call him senator-elect.

Over in the Tar Heel State, the GOP rejoiced when primary voters picked House Speaker Thom Tillis to take on freshman Democratic Sen. Kay Hagan. Tillis beat two rivals supported by various Tea Party groups, but he differed from his GOP opponents in tone more than substance; Tillis was a media-trained career politician savvy enough to avoid embarrassing statements on issues like rape or witchcraft. He did insert an antiabortion measure into a motorcycle bill, get caught on tape advocating a strategy to "divide and conquer" welfare recipients (you know, distinguishing the deserving poor from those people), and push through one of the nation's most draconian voter suppression measures. But in the political media's parlance, all you really needed to know was that Tillis was an "establishment Republican," emblematic of a "redefined GOP." Come January, he'll be serving in the 114th Congress.

Why did the media conveniently omit facts that didn't mesh with its set narrative of a decaffeinated, more levelheaded GOP? It's honestly difficult to say, and one can only speculate at reporters' motives. Part of it may be attributable to the fact that for all their hard-line conservatism, this year's crop of GOP candidates generally avoided the campaign stump stumbles that doomed previous Tea Party candidates -- and the press corps mistook improved P.R. for policy moderation. Particularly in the cases of Ernst and Gardner, there may also have been an element of guilt; sensitive to accusations of liberal bias in the Obama era, the media determined that it would find rising GOP stars who pointed the path toward a renewed, reformed and fundamentally reasonable party. Whatever its reasons, the media failed to do its job -- and while the GOP was destined for a good year anyway, the country is the poorer for it.