Ferguson nightmare widens: Rudy Giuliani, the NFL and cops doubling down on their "right" to kill 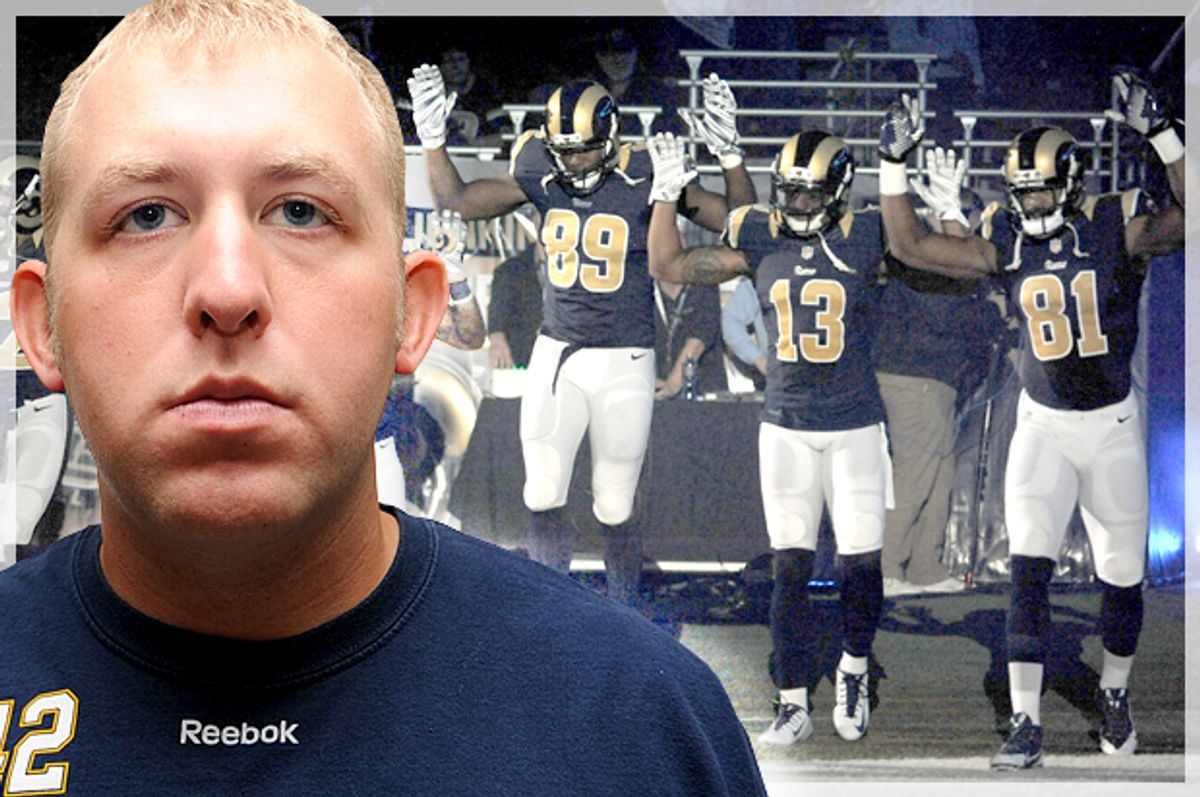 The single worst moment in Officer Darren Wilson’s testimony about the day he shot Michael Brown came when he called the unarmed teenager “it,” saying at one point, “it looks like a demon.” He also compared him to “Hulk Hogan” and described him as “bulking up” as if to magically “run through” his bullets. But somehow the word “it” cut through the delusional, self-aggrandizing dramatics and showed the problem at the heart of their encounter: To Wilson, Mike Brown wasn’t human. “It” was a “demon.”

Yet Wilson’s often incredible testimony about the threat posed by Brown carried the day, and the grand jury declined to indict the cop for killing the unarmed teen. The decision has not only worsened the nation’s racial tension, but provoked despair over the possibility of change. Hundreds of politicians and pundits are criticizing the most disruptive Ferguson protesters, including President Obama, but almost no one is talking to the police about the way they consistently escalate these controversies – in the street, with young black men, but also in their dealings with communities afterward, when they tolerate no criticism.

That trademark arrogance has been taken to an extreme by the St. Louis Police Officers' Association’s demand that the NFL discipline five St. Louis Rams players who participated in a pre-game “hands up, don’t shoot” protest of Mike Brown’s killing Sunday night. Appropriately, the NFL says no such discipline will be forthcoming; the cops also want an apology.

That a local police association thinks it is somehow bigger than the NFL, and that it has the power to curtail the First Amendment rights of football players, is just another example of the preemptive, aggressive self-defense that keeps police officers unaccountable for their transgressions.

Prosecutor-in-chief Rudy Giuliani set the tone for the Ferguson debate a day before the grand jury’s decision was announced. Giuliani minimized the problem of white police killing young black men on “Meet the Press,” telling Michael Eric Dyson “the white police officers wouldn’t be there if you weren’t killing each other 70-75 percent of the time” and asking “why don’t you cut it down so so many white police officers don’t have to be in black areas?”

A stunned Dyson shot back: “Look at this! This is the defensive mechanism of white supremacy in your mind, sir!”

I missed the Giuliani-Dyson debate when it aired, and when I searched for it online I was shocked to see the way right-wing sites were framing it: Newsbusters, Breitbart and others accused Dyson of “attacking” Giuliani, when the former New York mayor was clearly on the offensive. Dyson became the bad guy by calling Giuliani’s mind-set what it was. And the black guy is always the “attacker” in the right-wing mind, anyway.

As was the case with George Zimmerman’s acquittal, the Ferguson grand jury may have theoretically reached a defensible position given the letter of the law. They only had to believe Wilson had a “reasonable” belief that his life was in danger in order for the shooting to be justified. Thus leaders from President Obama to Mike Brown’s parents themselves have urged calm on angry communities, and counseled protesters to live with the verdict.

Dyson is among many to point out why that response, especially from the president, is so unsatisfying. While Obama strongly denounced “criminal acts” and insisted “I do not have any sympathy” for people destroying “your own communities,” his comments on the events that led to the violence were weirdly “vague, halting and non-committal,” Dyson wrote in the New York Times.

He slipped back into an emotional blandness that underplayed the searing divide, saying there was “an impression that folks have” about unjust policing and “there are issues in which the law too often feels as if it is being applied in discriminatory fashion.”

Of course even that relatively mild rebuke got Obama charged with inciting the Ferguson unrest by the right. The loons at Front Page Mag claimed Obama’s remarks stoked a “lynch mob” mentality while others called it “race-baiting as usual.” Milwaukee’s conservative sheriff David Clarke, who is African-American, insisted Obama’s call for calm after the verdict “was done with a wink and a nod,” because the president’s overall “political strategy of divide and conquer fuels this sort of racial animosity between people.”

Predictably, Rudy Giuliani escalated his rhetoric this past Sunday on Fox, telling Chris Wallace that it’s black people who bear responsibility for the outsize, and occasionally excessive, police presence in their communities.

"I think just as much, if not more, responsibility is on the black community to reduce the reason why the police officers are assigned in such large numbers to the black community." He added: "It's because blacks commit murder eight times more per capita than any other group in our society. If I'd put all my police on Park Avenue instead of Harlem, thousands more blacks would have died during my time in office."

When it comes to controlling the public debate over these killings, the police lobby consistently uses excessive force -- and gets away with it. Their outsize response to peaceful protest by the St. Louis Rams is only the latest example, and here’s hoping the NFL and the team don’t back down.