From Shia LaBeouf to “Shia LaBeouf”: How the "Transformers" star turned his life into bad performance art

He's not the first star to make his public image into extended performance art. But he may be the worst at it 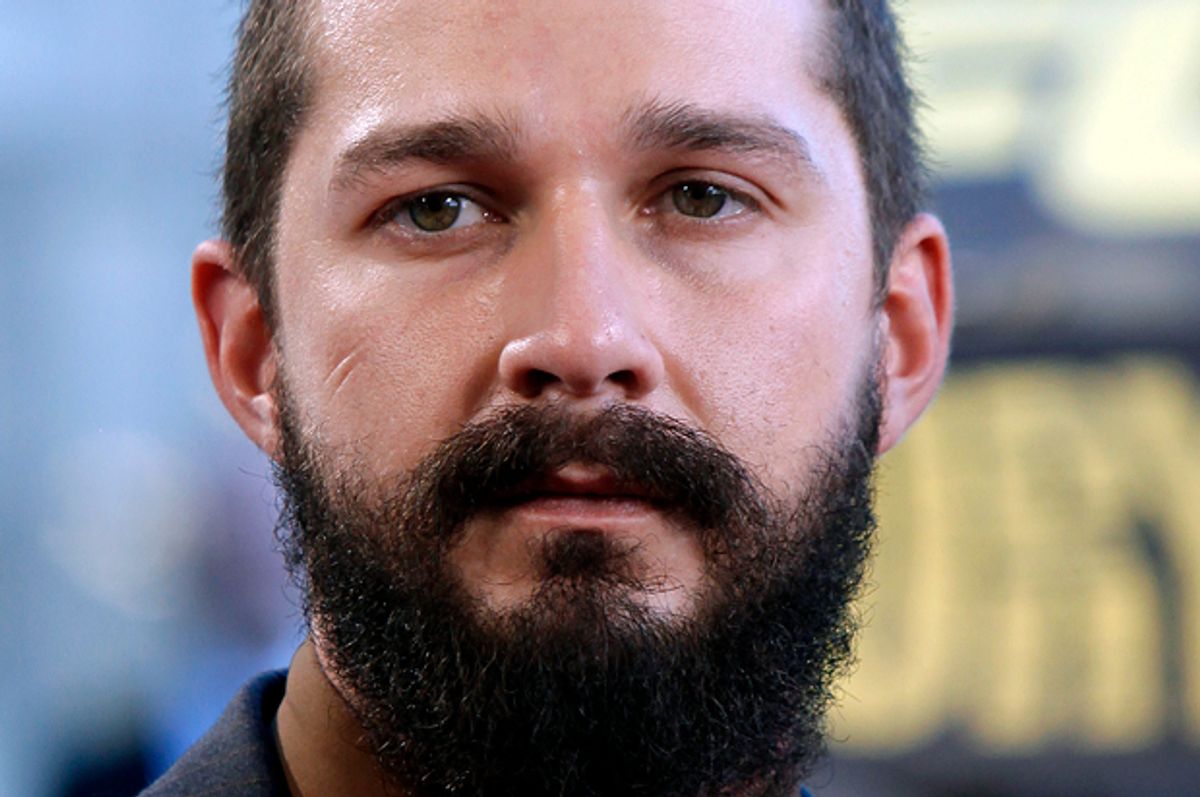 Shia LaBeouf is back in the press in the wake of a revealing interview with Dazed Digital about his “metamodernist” approach to art — which is to say, at this point, his approach to being Shia LaBeouf. Most of the response to the Dazed interview has centered around LaBeouf's revelation that he was raped in February by a patron of his #IAMSORRY art performance, a detail that the interview glosses over on its way to talk about Marina Abramovic, whose work, including the 2010 “The Artist Is Present” residency at MOMA is (let’s be charitable) the inspiration for LaBeouf’s “let’s sit across from one another and not speak” act for #IAMSORRY. He conducted the Dazed interview by email, and sat across from journalist Aimee Cliff for an hour wearing a GoPro camera on his head. The two didn't speak.

Of course they didn't. At this point, being Shia LaBeouf means performing the role of Shia LaBeouf at all times, even if it’s never clear who, exactly, Shia LaBeouf is supposed to be. Every time he is cited in the press as the star of the “Transformers” series, or worse, “Even Stevens,” Shia LaBeouf doubles down on his efforts to transcend his banal celebrity with “metamodernist” art, which seems to be shorthand for ripping off better ideas and passing them off as pastiche. He’s a short film director. A garden-variety enfant terrible.  A Broadway star. A comic book writer. Now, a performance artist.

But Shia LaBeouf is no Joaquin Phoenix, who turned the tables on his own “he’s come undone” art performance — announcing his acting retirement/second career-as-rapper — when he revealed he was merely in character during that bizarre Letterman appearance while filming a goofy mockumentary with Casey Affleck. Phoenix then sauntered back to his A-list career with roles in Paul Thomas Anderson and Spike Jonze films with a confidence that Shia LaBeouf surely envies.

LaBeouf is not even James Franco, whose various side projects, from a watered-down Smiths tribute band to all of his sundry literary aspirations, at least seem genuine, if only in their narcissism, and if not always of the highest quality. LaBeouf plagiarized Bukowski, of all people, in his comics, and comic artist and screenwriter Daniel Clowes in his short film “HowardCantour.com,” which he disingenuously refers to as “never properly [crediting] him” in the Dazed interview. He tried Broadway, as Franco did with “Of Mice and Men,” but tangled with Alec Baldwin and lost. Shia LaBeouf, alas, is a dilettante who lacks not only the courage of his artistic convictions, but also the convictions themselves.

Extreme performance art might sound goofy to the casual ear, but it’s not for amateurs. LaBeouf, who carried out his #IAMSORRY project in private, one-on-one encounters with a paper bag over his head, reports that he was physically assaulted and raped by a patron. This attack is not to be taken less seriously than anyone else’s. Performance artists aren’t asking to be raped, even when they continue their performance after an assault. But it would be unfortunate if LaBeouf's decision to continue his performance somehow helps perpetuate the misguided notion that violence and trauma are acceptable byproducts of “real art,” or some kind of litmus test for authenticity and full commitment.

Shia LaBeouf is not a bad actor. But in his relentless pursuit of some unmeasurable dose of art-world cool, he's turned himself into a walking stunt double of himself, a semi-professional provocateur. The presumed question LaBeouf would like to follow every stunt: How do you solve a problem like Shia? The real authenticity test will be how committed LaBeouf is to these projects when his name no longer gains his ripped-off short films entry to prestigious festivals, when the derivative nature of his extracurriculars loses even the dubious sheen of celebrity notoriety. Maybe retiring to direct a small gallery in Vermont can be his next metamodernist project, one that he can ride out for years, ironically or not, safely out of the public eye.