Rourke returns to the ring in a televised boxing match, his latest staged comeback 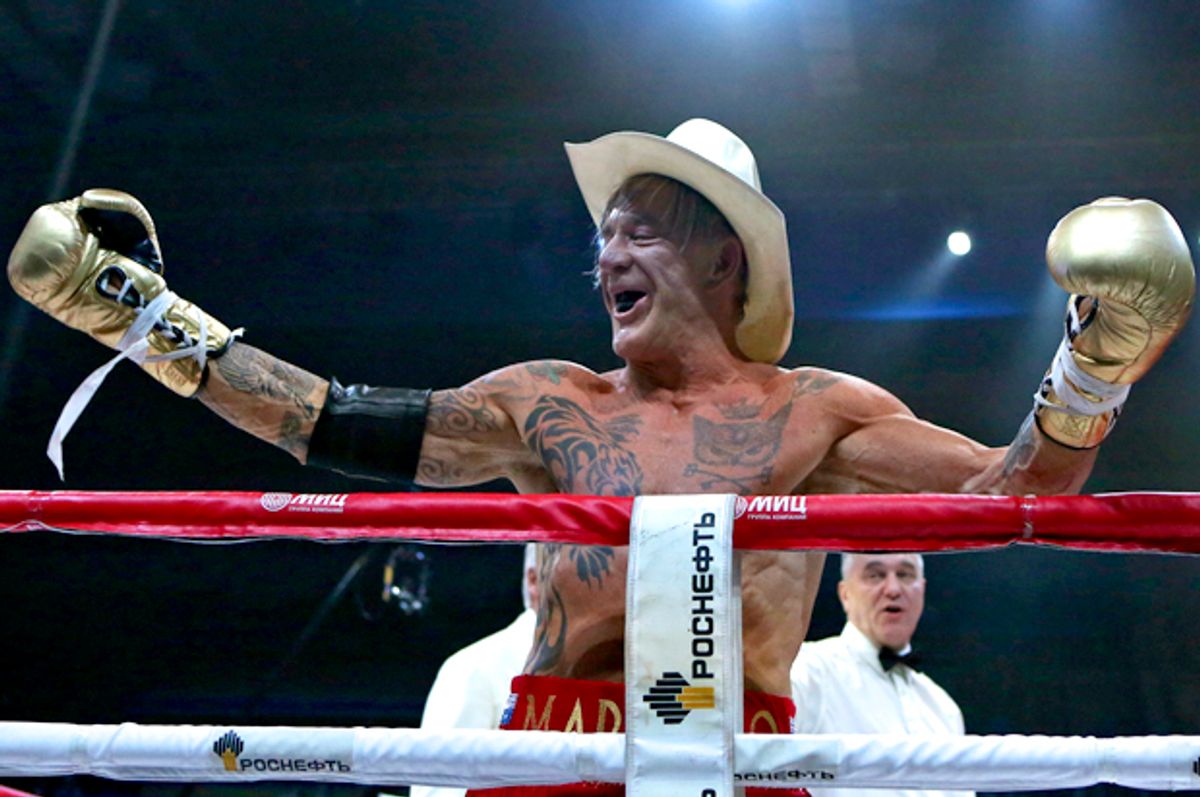 Once upon a time, children, Mickey Rourke was just a man. An actor, even, and considered by some to be a heartthrob, albeit of the sordid variety. But his double Razzie-nomination year of 1991 — “Wild Orchid,” “Desperate Hours” — was a low point, and Rourke left movie stardom to pursue boxing, his original passion. Then came the slow descent into antiheroism, into disfigurement and exile. He hit some men, some men hit him. Few noticed. He appeared in some films along the way. Few noticed. By the time he reemerged into mainstream notice in 2005 as Max in “Sin City,” Rourke had transformed fully into an Uncanny Valley version of himself, thanks to plastic surgery repairs to his professionally battered face.

But an actor who allows his face to be beaten into un-recognition and then put back together inexpertly can always play a comic book character. Or a professional wrestler ravaged by those brutal twins, job and time. In 2008, with his poignant, all-too-real starring turn as Darren Aronofsky’s has-been “The Wrestler,” Mickey Rourke had himself a hand-to-God, Oscar-nominated, Golden Globe-winning comeback.

Roles like that are few and far between, but Rourke continued to play to his strengths as a campy boogeyman villain in mainstream blockbusters like “Iron Man 2” and “The Expendables.” And yet, he couldn’t ignore the call of the boxing ring. Could he replicate that comeback success in his original proving ground?

Rourke returned to the sport Friday in a televised exhibition match in Moscow. He beat, so the story goes, a man more than half his age. Let the legend of Mickey Rourke be rewritten once again, the headlines promised, from the restrained (BBC) “Mickey Rourke wins exhibition boxing match” to the breathless (OK, Just Jared) “Mickey Rourke Looks Ripped at 62 in New Shirtless Photos!” While it turns out the former is, perhaps, only technically true—the Daily Mail is reporting that Rourke’s 29-year-old opponent, Elliot Seymour, is homeless, possibly suffers from mental illness, and was allegedly paid to take that dive in Round Two — it’s the latter that encapsulates this latest chapter in Mickey Rourke’s late-life virility pageant gone wrong.

Hollywood abhors aging and loves a triumphant underdog, and in that atmosphere, a Mickey Rourke exhibition boxing match between anyone other than Sylvester Stallone himself becomes not an absurd and slightly horrifying fantasy but a real thing that happens, even if it has to happen 6,000 miles from Las Vegas. Mickey Rourke preening in his cowboy hat and self-tanned abs before pretending to beat up a younger man is Hollywood comeback porn of the most naked, manufactured variety. It’s the masculinity-theater version of a “G-MILF: she got her bikini body back!” magazine spread that turns out, upon closer inspection, to be snapshots of a Kirstie Alley hologram flickering on the beach. Even the language is similar: Us magazine gushes: “Supporters, however, couldn't believe how ripped (those abs!) and in shape Rourke is. According to the Associated Press, he lost 35 pounds while training for the competition.”

Stars, they’re just like us! They stage televised boxing matches four years before they’re eligible to draw Social Security because death is forever nipping at our heels, yawning its fetid breath down our collective necks! That the whole production was faked is not surprising. The authenticity of the moment doesn’t actually matter — attention is the only true currency of celebrity. But against our better judgment, Mickey Rourke made us look, and so even if the match was fixed, he still wins. Behold Mickey Rourke, Round Two: The Boxer. It’s no Aronofsky Oscar-bait, but for Rourke, it’ll have to do.