The officers issued a statement calling the gesture "tasteless, offensive and inflammatory" 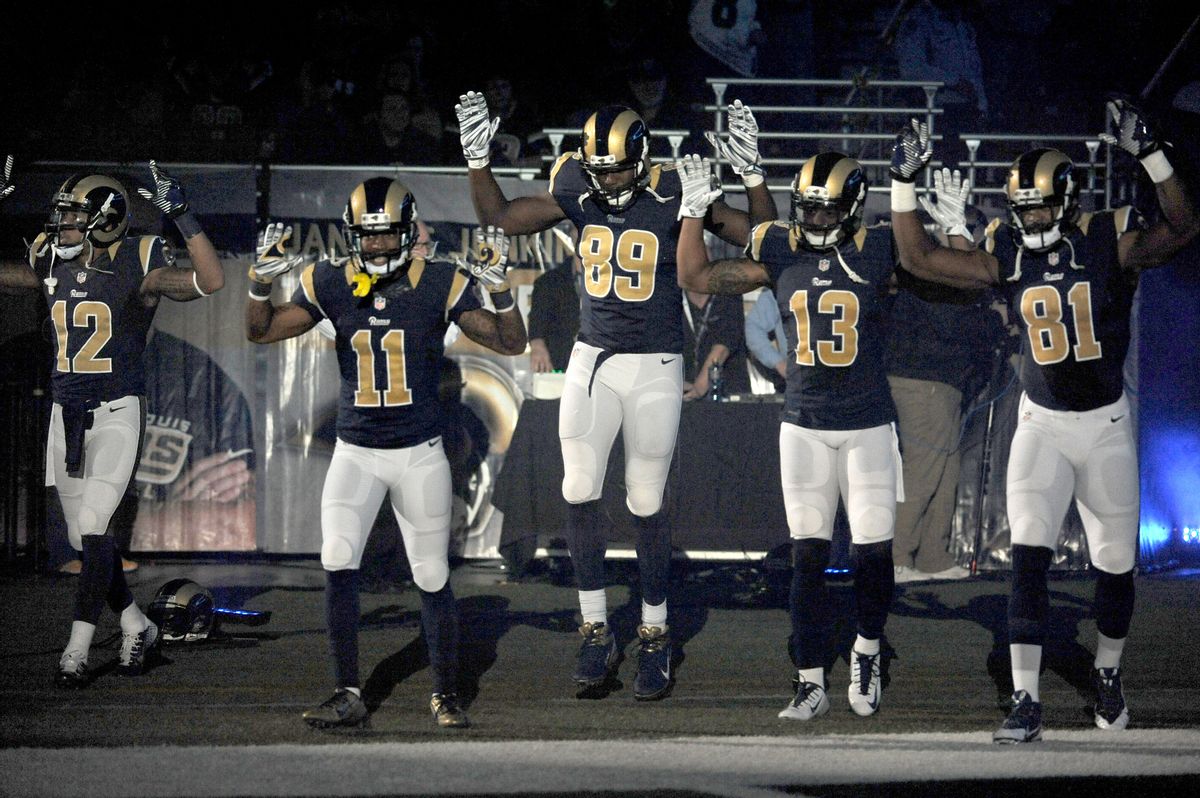 Members of the St. Louis Rams raise their arms in awareness of the events in Ferguson, Mo., as they walk onto the field during introductions before an NFL football game against the Oakland Raiders, Sunday, Nov. 30, 2014, in St. Louis. (AP/L.G. Patterson)
--

The St. Louis Police Officers Association (SLPOA) has issued a statement condemning the St. Louis Rams players who entered the field last night with their hands raised in a "Hands up, don't shoot" gesture, calling it "tasteless, offensive and inflammatory." The Association is now requesting that the players responsible--Stedman Bailey, Tavon Austin, Jared Cook, Chris Givens and Kenny Britt--be punished.

The gesture has been used by Ferguson protesters as a reference to the position of surrender that Michael Brown allegedly assumed before being gunned down by former police officer Darren Wilson. The police association argues that the NFL players were irresponsible to perpetuate a narrative that had been disproven by evidence presented to a grand jury.

The SLPOA is calling for the players involved to be disciplined and for the Rams and the NFL to deliver a very public apology. [SLPOA Business Manager Jeff] Roorda said he planned to speak to the NFL and the Rams to voice his organization's displeasure tomorrow. He also plans to reach out to other police organizations in St. Louis and around the country to enlist their input on what the appropriate response from law enforcement should be. Roorda warned, "I know that there are those that will say that these players are simply exercising their First Amendment rights. Well I've got news for people who think that way, cops have first amendment rights too, and we plan to exercise ours. I'd remind the NFL and their players that it is not the violent thugs burning down buildings that buy their advertiser's products. It's cops and the good people of St. Louis and other NFL towns that do. Somebody needs to throw a flag on this play. If it's not the NFL and the Rams, then it'll be cops and their supporters.

Jeff Roorda, the seeming leader of the charge against the Rams has a long history of questionable behavior--in 2001, he was fired as a police officer for falsifying records. Earlier this year, he wrote and sponsored a bill that would seal all records involving police action and prohibit the release of names of officers involved in shootings.

Social media erupted with tweets praising the team for the unusual political move.