Chris Rock's lesson for Ross Douthat: Why the right is so deluded about Ferguson

Conservative Ross Douthat says racial turmoil is both sides' fault. Here's what he can learn from Chris Rock 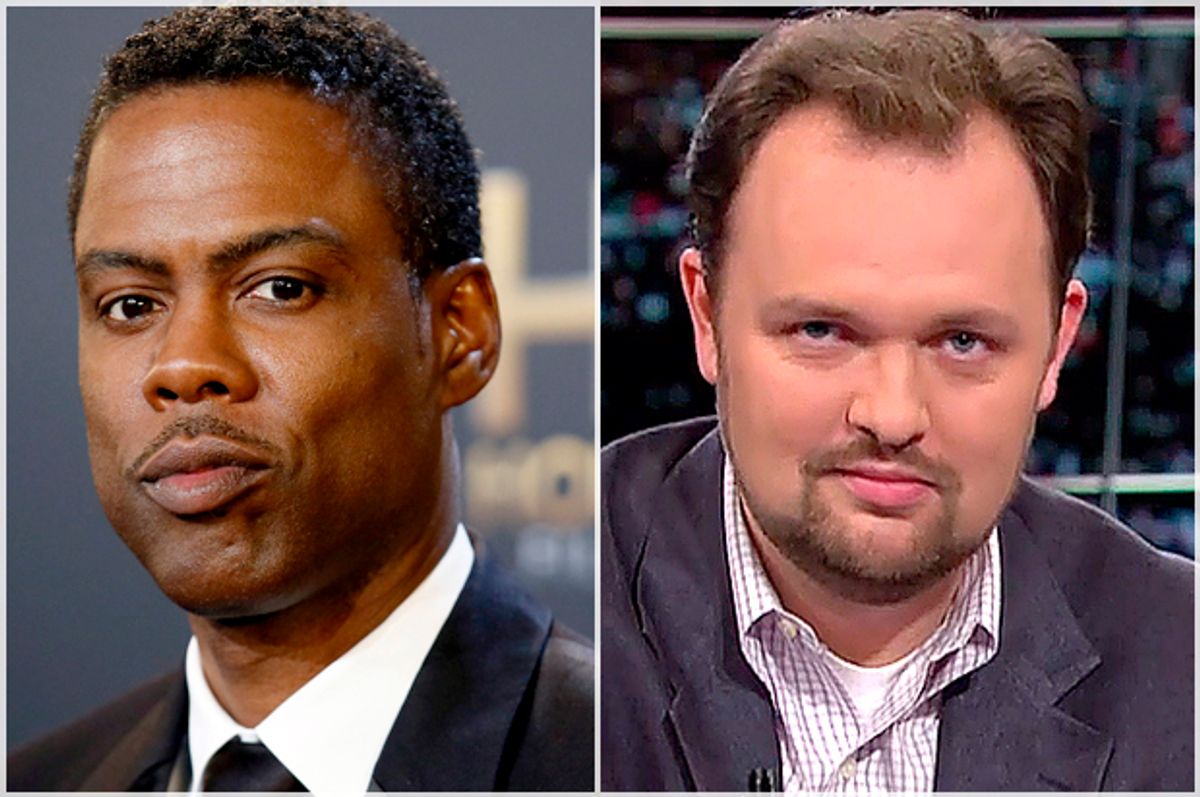 When people in the center or on the left go after Ross Douthat, the New York Times’ supposedly reform-minded right-wing columnist, it’s usually because he’s written something retrograde about LGBTQ people, sex or feminism. What often goes less appreciated, though, is that as clueless as Douthat frequently is on matters of sexuality and gender, he’s nearly as misguided when it comes to issues of race. His most recent piece, a meditation on the unrest in Ferguson and the resurgence of “identity-based politics” in America, is a case in point. In little more than 900 words, Douthat’s column is a bravura display of how not to think about the politics of race.

Unlike much of Douthat’s work — which tends to be characterized by its measured prose and its self-conscious desire to sound “reasonable” to liberal Times readers’ ears — the piece doesn’t chug along inoffensively before suddenly reaching a terrible conclusion. No, this one’s a mess from the start. “Last summer,” Douthat writes, “around the anniversary of Martin Luther King Jr.’s ‘I Have a Dream’ speech, I wrote a column making — gingerly — a case for optimism about race and politics in America.” From today’s perspective, he concedes, the column doesn’t look great. Watching as Ferguson “seethed and smoldered,” Douthat writes, forced him to make “a case for greater pessimism.” Not because the behavior of the authorities in Ferguson revealed the farcical nature of the “post-racial” myth, mind you, but because of a favorite scapegoat of straight, white and male pundits like Douthat: identity politics.

“Ultimately,” Douthat explains, “being optimistic about race requires being optimistic about the ability of our political coalitions to offer colorblind visions of the American dream.” For Democrats, Douthat argues, that means “stressing economics more heavily”; while for Republicans it means “leaning more on family and community” (whatever that means). The problem, at least as Douthat sees it, is that “neither coalition has done a very good job selling such a vision, because neither knows how to deliver on it.” The result? Two parties that are “increasingly dependent on identity-politics appeals.” The left has “race, ethnicity and gender,” while the right’s got “white-Christian-heartland cultural anxieties.” And just like that, Douthat’s turned the Ferguson story — which was about institutional racism and police brutality — into a platform for the most intellectually bankrupt of columns, the attack on both sides.

Douthat’s move here is subtle, so it’s worth pausing and reminding ourselves of the controversy he’s arguing is both sides’ fault. This summer, Ferguson police officer Darren Wilson shot and killed Michael Brown, an 18-year-old who at the time of his death was not armed. Brown’s body was left in the middle of the street, exposed, for hours. After a grand jury process that was unusual in multiple ways (all of which were more likely to have been in Wilson’s benefit) it was decided that Wilson, who described Brown as demonic and beyond reason, would not have to stand trial for ending Brown’s life. Throughout the ordeal, peaceful protesters not only had to withstand a series of suspiciously one-sided leaks, but a hostile police force that was not only absurdly militarized but also disproportionately white. And when the non-indictment came in — after multiple tension-building delays, and at the dark of night, when already anxious crowd-control officers were less able to maintain surveillance — a small number of protesters predictably began to riot.

Now, unless you’re willing to claim that a relative handful of unarmed and economically disadvantaged protesters has the same amount of power as the State of Missouri, it’s totally ridiculous to describe the Ferguson situation as being a problem of both sides’ creation. If a bodybuilder hit me for no reason and I yelled at him in response, the two of us would not be equally at fault. To be sure, there are millions of (mostly white) Americans who are apparently comfortable making that profoundly silly argument; quite likely, many of them also believe American racism is now mostly anti-white. I’m sure they find Douthat’s shifting half the blame from the powerful to the powerless to be eminently just. I’m sure they, too, were happy to share John McWhorter’s critique of Michael Brown as an imperfect victim, as Douthat does near his piece’s end.

But as the torture-excusing Douthat himself noted in another recent column, this one on the supposed Caesarism of the president’s immigration actions, the majority isn’t always correct. Whether it’s physical or numerical, might does not make right. Every white person in the country could reject her own country’s history and blame black people for their own oppression, but that wouldn’t make the claim any less deserving of contempt. There are truths of politics and history that go beyond the whims of public opinion and conventional wisdom. As Ta-Nehisi Coates wrote recently, there are things that are undeniable but cannot be said. In theory, it’s Douthat’s job to recognize those things, to call them out, to write them down, to help us see what’s in front of our noses, which is, as Orwell said, a constant struggle.

On these scores and others, Douthat’s latest falls short. But at least he’s not the only one talking. In a new must-read interview with Frank Rich, the comedian and filmmaker Chris Rock weighs in on Ferguson, too. And perhaps because most of being a comedian is, he says, being able to “notice things people don’t notice,” Rock’s understanding of Ferguson is conspicuously unlike Douthat’s and much closer to the truth. “When we talk about race relations in America or racial progress,” Rock said, “it’s all nonsense.” Douthat frets about how identity politics hurts race relations, but as Rock notes, there is no such thing. “White people were crazy,” Rock explained. “Now they’re not as crazy. To say that black people have made progress would be to say they deserve what happened to them before.” There aren’t two sides in Missouri, in other words, but only one: that of the powers that be in Ferguson, whose culpability Douthat, like so many others, still refuses to face.