From the "knee defender" to the pig on the plane: The year in crazy in-flight drama 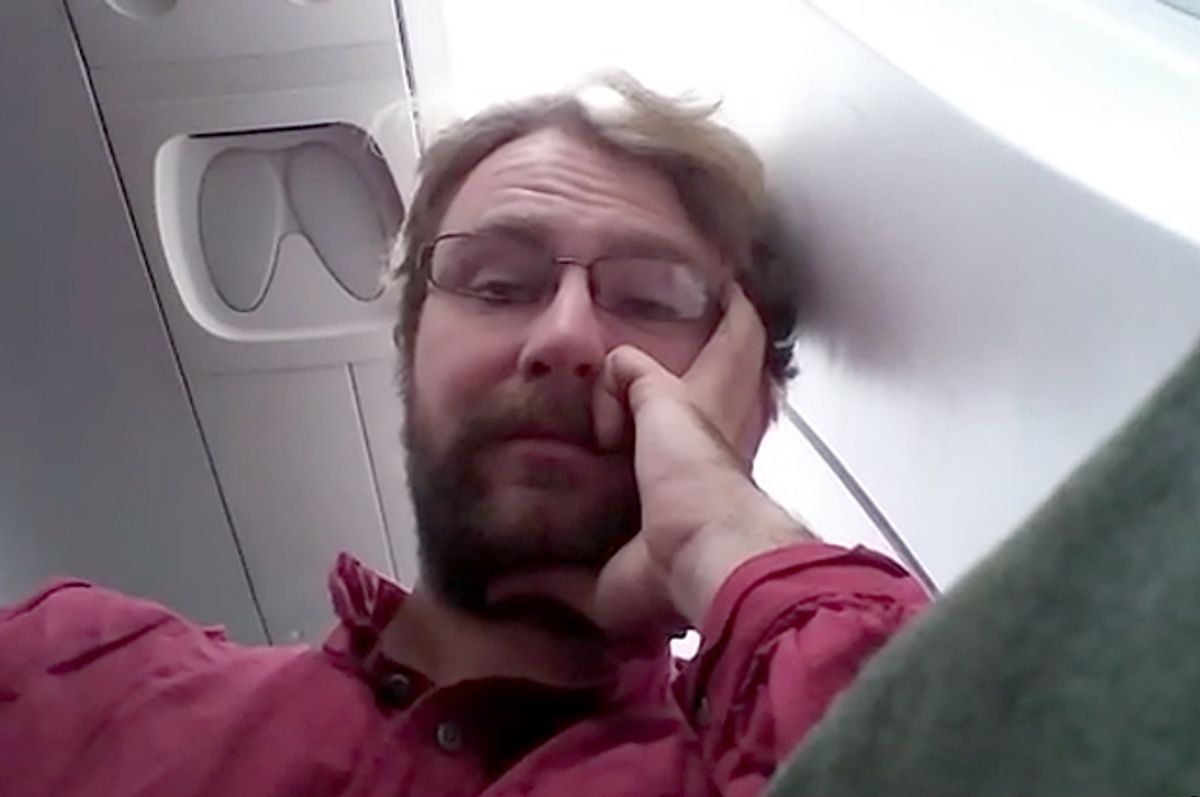 Air travel continues to be a fraught and often unpleasant experience, but as more and more airlines start to offer Wi-Fi as you fly, at least the lucky folks perusing the Internet from the comfort of their reclining chairs have the treat of witnessing these dramas as they play out on board. This has been a particularly juicy year for in-flight drama: From the ongoing debate over passengers’ right-to-recline to the epidemic of passenger shaming, let us reflect on the year in terrible mile-high etiquette.

Passenger Shaming
Today, a man engaged in one of America's oldest and most noblest sports -- passenger shaming -- sharing a video of the "Screaming Hell Demon" child that ruined his flight.

And he's not alone. This September, a new website called "Passenger Shaming" cropped up, allowing anonymous flight attendants and passengers to document the whole range of horrors taking place on board, from nudity to piss in jars. Be warned: It will haunt your dreams.

In August, a United Continental flight was diverted after two passengers on board got in a fight over a “knee defender,” a device that allows a passenger to prohibit the person in front from reclining their seat. Another flight, from Miami to Paris, was diverted the following week over a similar confrontation.

The incident prompted a heated online conversation about who has the right to recline, with pundits offering hot takes that ran the gamut from "Don’t Want Me to Recline My Airline Seat? You Can Pay Me" in the New York Times to Gawker's "Don't Want Me to Spit on You When You Recline Your Airline Seat? Pay Me." In response, many airlines have banned the device, which: fair.

The Pig on the Plane

Last week, a woman got kicked off a plane after she tried to bring her emotional support pig on board and the pig cut up rough — understandable, it’s a pig! — and started squealing and pooping on the floor (a passenger captured a photo of the pig on the plane, which you can see here). And pigs aren't the only offenders: In May, a flight had to make an emergency landing after a large service dog named Truffles decided to relieve himself in the middle of the aisle.

But believe it or not, it's not that hard to bring an animal on the plane — in a recent New Yorker piece called “Pets Allowed,” author Patricia Marx discovered that she had no problem bringing her “emotional support pig,” Daphne, aboard a JetBlue flight from Newark to Boston.

Every year there are some idiots who think it’s funny to make jokes about bomb threats while flying, and this year did not disappoint. First, there was the 14-year-old Dutch girl on American Airlines who thought it would be smart to tweet "Hello my name’s Ibrahim and I’m from Afghanistan. I’m part of Al Qaida and on June 1st I’m gonna do something really big bye" (she was promptly arrested). Then there was this joker who caused Ebola panic after sneezing on the plane and joking that he’d been in Africa (he hadn’t).

But hey, even if you’re not making glib jokes about terror or disease, you should still watch your mouth: Southwest Airlines booted off a man and his family after he made a mean tweet about the airline’s service (“Something to the effect of, ‘Wow, rudest agent in Denver. Kimberly S, gate C39, not happy @SWA,'” he later described it).

Last November, "Bachelor" producer Elan Gale took the Internet by storm by live-tweeting an on board confrontation he had with a passenger named Diane that involved the pair passing a series of rude notes back-and-forth until Diane eventually slapped him. Well, turns out Gale was just capitalizing on the public's never-ending thirst for airline horror stories: He later took to Twitter to reveal that the whole thing had been a big hoax.

In September, "Modern Family" director and editor Ryan Case made headlines by live-tweeting the drunken, racist meltdown of a neighboring passenger, aka “the worst person in the world,” over the course of three hours. This time it wasn't a hoax, and you can read the full, awful play-by-play here. Let this be a warning to you — if you choose to yell racist slurs at another passenger, make sure there’s no Wi-Fi on board.

Meanwhile, in-flight meltdowns continue to be captured in their rawest form: the cellphone video.