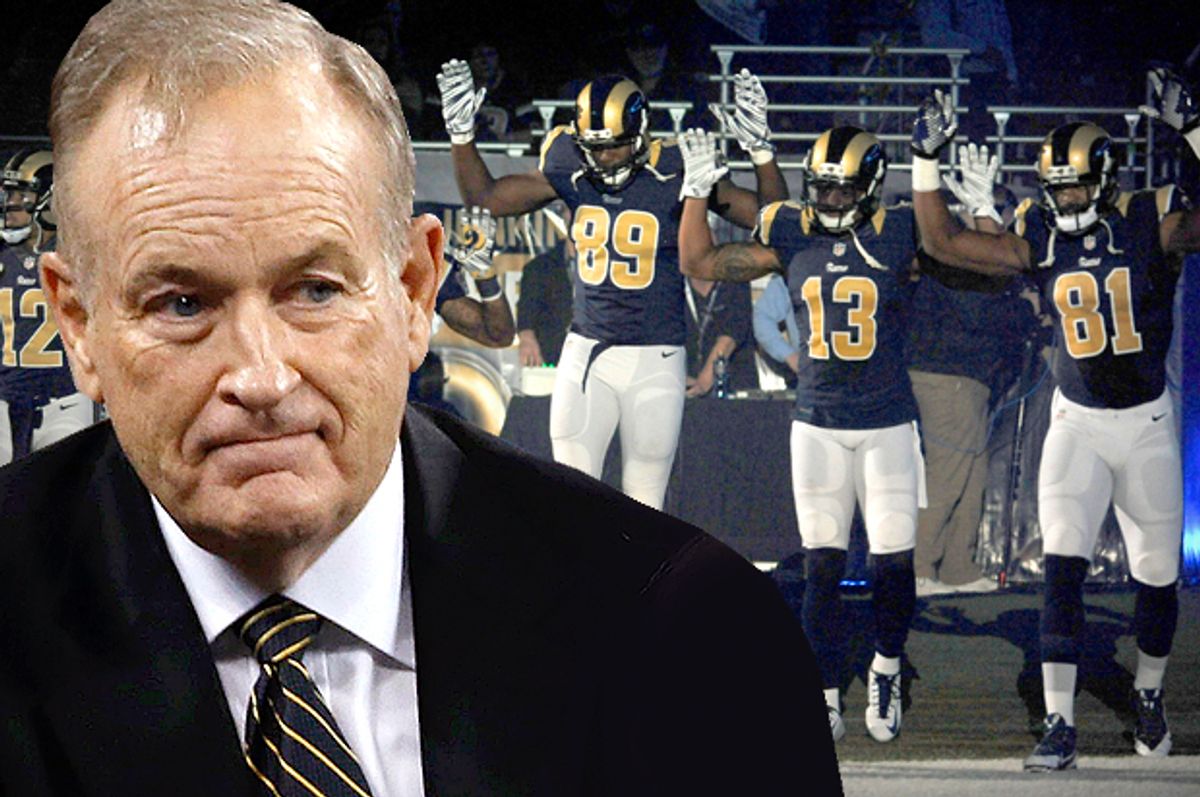 Bill O’Reilly will be Bill O’Reilly. On Monday’s show he spewed his trademark racial ignorance and animus, railing against the “hands up, don’t shoot” protest by five St. Louis Rams players Sunday night, for which the St. Louis Police Officers Association demanded they be disciplined by the team and/or the NFL. The Fox host declared that the five adults “weren’t smart enough to know what they’re doing.” That’s O’Reilly’s shtick: crude racism veiled as Everyman common sense.

Rams executive vice president Kevin Demoff has essentially been accused of an O'Reilly move, apologizing to St. Louis County Police Chief Jon Belmar for his players’ actions Monday, thus implying they weren’t capable of living up to their social obligations as community members and sports heroes. There is a major dispute over Demoff’s words, however. Here’s the email Belmar sent to his staff:

I received a very nice call this morning from Mr. Kevin Demoff of the St. Louis Rams who wanted to take the opportunity to apologize to our department on behalf of the Rams for the "Hands Up" gesture that some players took the field with yesterday.

Mr. Demoff clearly regretted that any members of the Ram's organization would act in a way that minimized the outstanding work that police officers and departments carry out each and every day. My impression of the call was that it was heartfelt and I assured him that I would share it with my staff.

But Demoff denies Belmar’s account, though he confirmed to ESPN's Nick Wagoner that he’d talked with Belmar and police leaders on Monday.

"In those conversations, I expressed regret that players' actions were construed negatively against law enforcement," Demoff told ESPN.com. "At no time in any of the conversations did I apologize for the actions of our players," Demoff added. "[The Rams] do believe it is possible to support both our players' First Amendment rights and the efforts of local law enforcement to make this a better community."

The Rams organization issued a bland statement that referenced “positive discussions” with Belmar and other police officials and expressed “respect” for the POA’s point of view, but didn’t use the word apology.

Late Monday night Belmar doubled down on his version of events. A statement from St. Louis County Police Department says that Demoff phoned Belmar, though “the chief never asked for anyone from the Rams to contact him.” It notes that while Demoff has denied using the word "apology," the Rams honcho told the St. Louis Post-Dispatch that shared with Belmar that he “felt badly that our players’ support of the community was taken as disrespectful to law enforcement” and that he “regretted any offense the officers may have taken.”

The statement explains that Belmar "believed it to be an apology." It may be that’s what Demoff wanted Belmar to believe – he just didn’t want the police chief to announce it to the world. The POA then Tweeted:

Apology: "expression of regret for not being able to do something" @kdemoff: "I regretted any offense their officers may have taken."

We’ll see whose word stands up, but the cops were widely mocked on Twitter for their aggressive campaign to twist Demoff's words into an apology.

Personally, I find it hard to believe Demoff would actually apologize, because an apology from the Rams would be on a continuum with the racial disrespect shown by former Los Angeles Clippers owner Donald Sterling. No, it’s not an expression of racial prejudice comparable to Sterling’s. But it would represent a comparable paternalism and disrespect for the players’ autonomy.  Frankly, it would be just one more example of white sports management disrespecting black players in a majority-black sport.

So I hope it turns out Belmar wasn’t honest, or that he heard what he wanted to hear, or whatever the correct euphemism is for lying in this situation. Because if it’s Demoff and the Rams who are lying, then they’re essentially siding with Bill O’Reilly, which would be deplorable.

O’Reilly suggested that the players were so dumb, “they believe white police officers shoot black youths all the time.” To prove how out there O’Reilly was, regular contributor Mary Catherine Ham disagreed with him, saying she thought the players’ “non-violent” protest was fine, that the cops’ complaint was problematic, and that “more speech is better than less speech.”

If I had to decide between Belmar and the Rams as to who’s lying, I’d say Belmar is. But the Rams shouldn’t have made it challenging to decide, by consulting with Belmar and other police officials immediately after their tantrum. The rapid meetings, plus the team’s Solomonic non-statement, disrespected the players, and only the POA's boneheaded determination to depict the team as caving to their tantrum forced officials to deny that a polite exchange of views had constituted an apology.

I wrote Monday that the St. Louis cops’ outrage at the five Rams’ dignified peaceful protest was just another symbol of the police establishment’s inability to brook criticism. The Rams’ attempted appeasement shows why that continues.