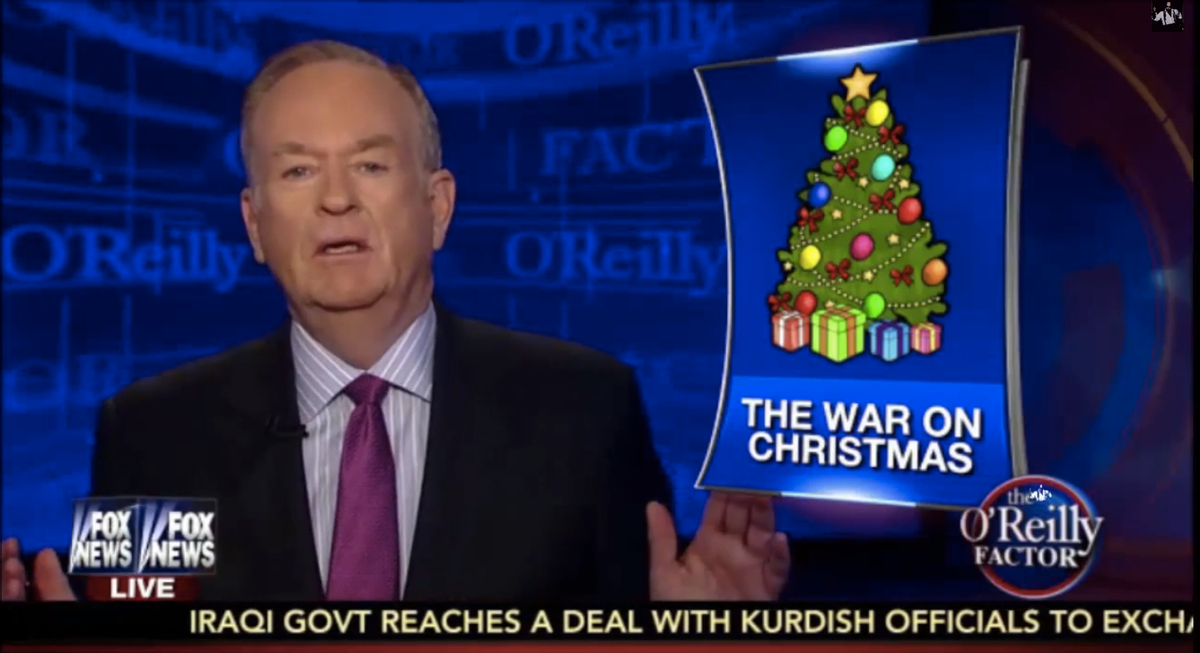 On Tuesday's edition of "The O'Reilly Factor," Bill O'Reilly addressed the War on Christmas, a strangely anachronistic conservative cause that takes issue with people who try to "diminish the celebration of Jesus' birthday."

A group called American Atheists has rented billboards in a number of states reading, "Dear Santa, All I want for Christmas is to skip church! I'm too old for fairy tales." I have an issue with billboards advocating any religious belief and I don't think this one is particularly inspired, but that's not really the issue. O'Reilly called the campaign an affront to Christianity and the American Way. So, he hosted psychotherapist Karen Ruskin (an agnostic, he says) to explain why these cruel people would spoil his fun.

"It's an insulting sign, is it not?" O'Reilly asks.

"It's horrifically insulting," Ruskin trills with the smarm of someone angling for her own show. "It's really disrespectful. But not unlike the bully who tries to push other people down in order to make themselves feel better, that's what's happening here."

"It almost seems sadistic that you would try to hammer down something like that," O'Reilly says later in the clip.

[Just an interjection, Bill, do you know how Christianity was spread? Hint: via conquest.]

"Isn't that sad? When I work with families where one member of the family unit is atheist and the rest are not, they have this relationship dynamic exactly in which [sic] you are describing with the media and with others who are not atheist. And it's very upsetting in a family unit when you have one person who is shouting loudly in their nasty way about how everybody else in the family should be believing what they're believing, the pushing of other people down, the nastiness ..."

Thank you, Karen Ruskin, for pathologizing atheism. Just FYI, in case anyone was interested in seeking mental healthcare, she is far from the norm. I know this because my mother, stepfather and both grandfathers are all psychologists (which you may have already guessed since I'm so charmingly kooky).