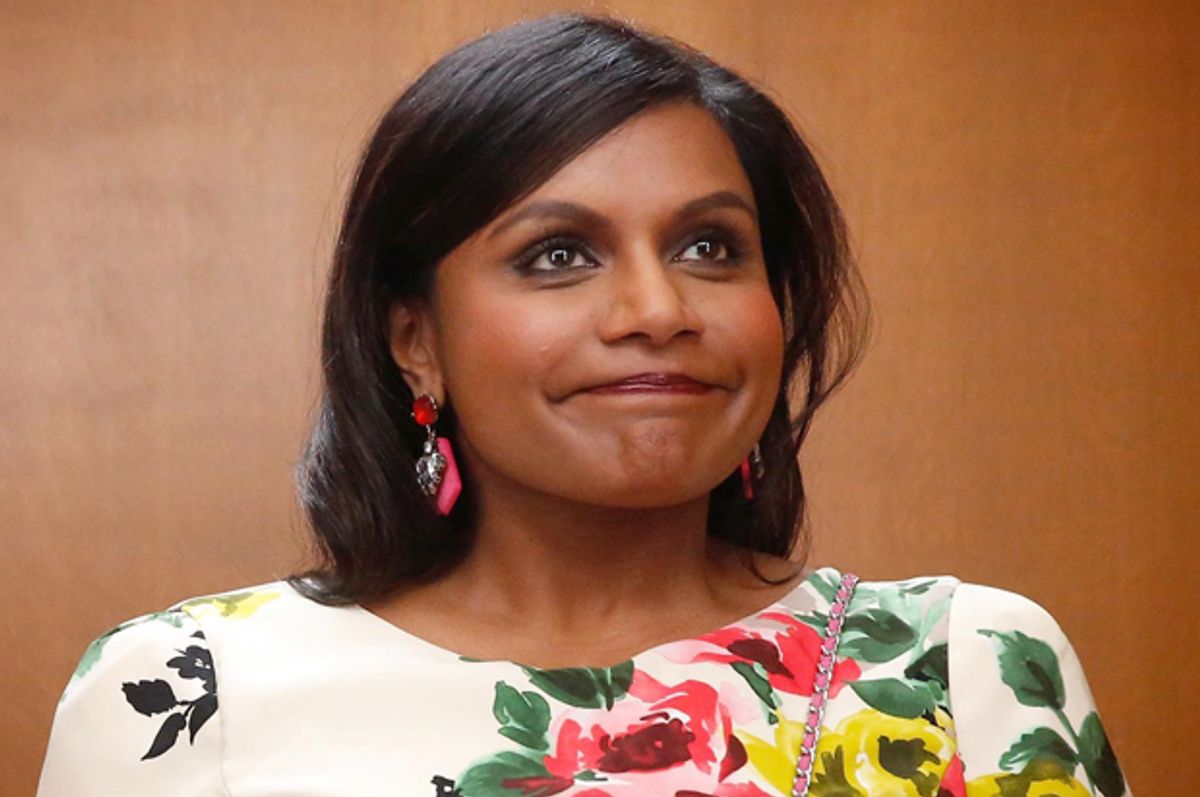 Rhea Perlman’s “Mindy Project” guest spot as Danny’s overbearing Staten Island ma, Annette Castellano, has been exactly what the show needed. Not only is it a splendid showcase for one of our finest comedic actresses, but having her around has also helped us better understand where some of Danny's many hangups stem from, and even helped us get to know Mindy — whose interactions with Annette have been occasionally tense, sometimes outright unpleasant — a little better. As we saw last night, the integration of Annette has also been key to introducing new areas of friction within the Danny-Mindy relationship.

But now that Annette is a feature of the show, the absence of Mindy’s parents is even more conspicuous. At this year’s New Yorker Festival, Mindy Kaling explained why they haven’t shown up yet, saying that while she plans to include them at some point, she has had difficulty casting someone to play her mother, who passed away before the show premiered in 2012. That is totally understandable, needless to say, but Mindy Kaling isn't Mindy Lahiri, and it's hard not to think that introducing Mindy's parents could provide a useful layer of character development for one of the most deliberately, charmingly superficial characters on TV.

There’s a reason that "meeting the parents" is such an often-used sitcom trope. Particularly in a show about the relationship between urban professionals, the eventual introduction of the parents can provide a deeper insight into adult characters who may have seemed thus far to be living in a vacuum. While we know a lot about Mindy’s feelings on Michael Fassbender and sour straws, her inner life is something of a blank space (think of how few real insights were revealed when Danny read Mindy’s diary). But intelligently deploying Mindy’s parents could be a huge moment both for her character and for the show. The parents have already informed our understanding of Mindy in subtle ways: We know that they would only let her go to Jewish sleepaway camp ("they only trusted me in the gentle hands of the Jews of the Berkshires"), that they send her an email every day called “Mindy’s Compliment Corner." Let us see this beautiful lunacy in action.

While Jack Donaghy on "30 Rock" read mostly as a caricature, his scenes with his mother, played to perfection by the late and wonderful Elaine Stritch, softened him and gave us context for his prickly exterior, showing the audience his rarely seen vulnerable side. While "Sex and the City" was unusually devoid on parental plotlines, the episode where Miranda’s mother passed away was one of the show’s emotional high points. And what would George be without Frank and Estelle Costanza? His parents, like Jerry’s, became an integral part of the character’s mythology; plus, by letting us in on George’s family traditions, the world gained a tradition of its own (a festivus for the rest of us).

In that vein, including the parents has historically been a great way to create rich comedic roles for veteran actors. Rob Reiner and Jamie Lee Curtis played Jess’ parents on "New Girl," while bringing in Danny DeVito as Frank Reynolds was one of the best decisions "It’s Always Sunny" has ever made. The "Friends" parents — Kathleen Turner, Elliott Gould, Morgan Fairchild — played like a veteran murderers’ row of Hollywood nostalgia. And in most instances, the parents appear as wackier, more extreme versions of their children, which tends to make these small cameos particularly juicy and memorable. Casting Mindy’s parents would be a great way to get some new, big personalities into the show, and to stop relying on Mindy and Morgan for all the show’s off-kilter moments.

Bringing in the parents is also a reliable source for creating fresh conflict and new plotlines, which "Mindy" desperately needs. How many more times can Danny and Mindy argue about whose apartment they are going to stay over at? Bringing in the parents brings with it a built-in micro universe of new plot threads: the relationship with the in-laws, the extended family, the Freudian childhood hangups. For a show that ostensibly plays with rom-com clichés, the parents and in-laws are extremely fertile grounds for parody (and since parental casting choices often serve as a wink and a nod to the stars of sitcoms past, this could allow for some more fun, meta moments, like the decision to cast Nick and Carla Tortelli as Danny's parents).

As it stands, the world of "The Mindy Project" is remarkably small. There’s the gang around the office and … yep, that’s about it. Mindy has few out of work friends (good riddance, Gwen) and seems to spend hazardously little time with her patients and students. And while I love Morgan and Peter (who, sadly, is leaving the show soon), the show could use some new drama to throw into the mix and to widen its borders outside the world of Shulman & Associates.

For her part, Mindy has clearly given some thought to who the character’s parents are, and just recently told TV Line’s Michael Ausiello that she "thinks" we will meet them by the end of the season. Well, great! There's so much potential there just waiting to be explored. Here’s the preliminary character sketch she gave of her fictional parents at the New Yorker festival: "My dad was very studious and kind of round, and he's a pharmacist," she explained. "And my mother was a very theatrical woman who in India wanted to be an actress but it didn't work out … she would always play like a gypsy woman in Boston regional shows ... She took her acting career very seriously. So that's where that side of Mindy's personality came from.” Now don’t you want to see that?