They got it all wrong: New data shows how Dems can win back America

Turns out conservatives are getting crushed in family value debates. Here are 5 other findings the left should know 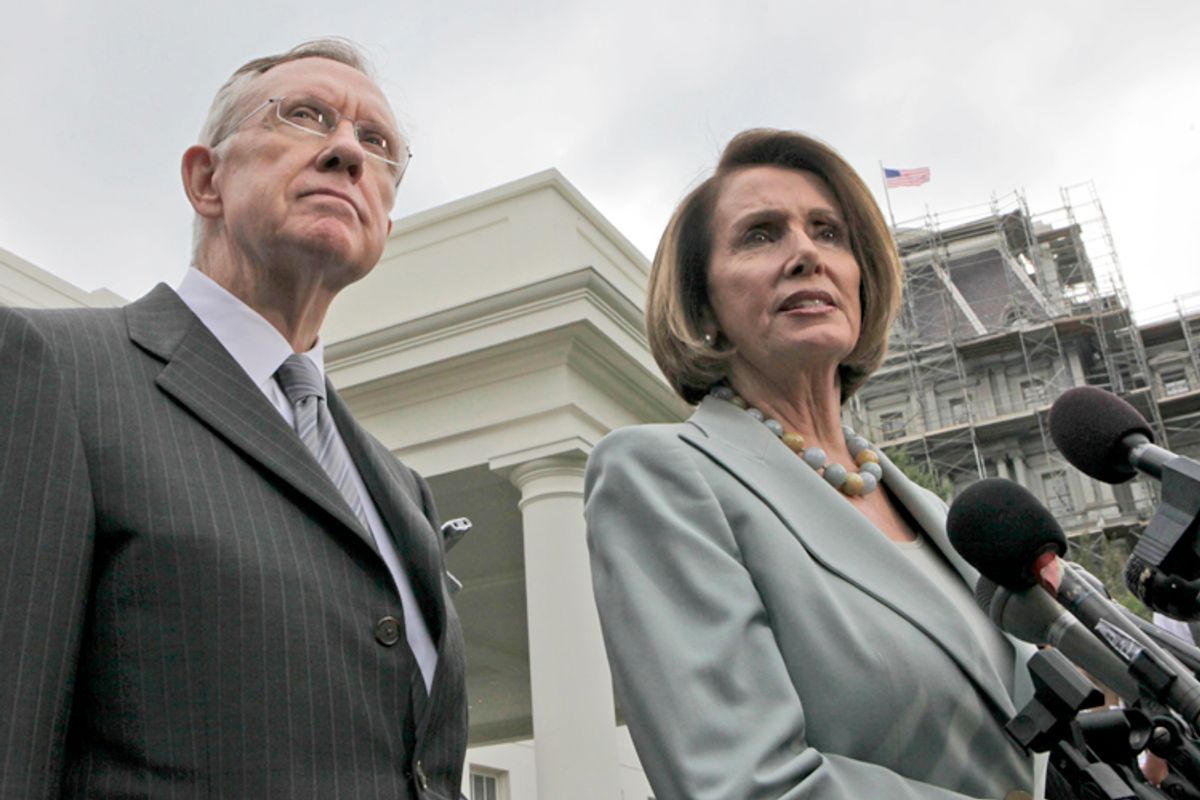 To everything there is a season and now is the time for election dissection. How do we reconcile an electorate that raised the minimum wage everywhere possible and opted for Republicans who profess not to believe in it? And what do we make of the – even for America – pathetically low turnout?

One-third of Americans struggle to make ends meet. That’s 106 million people who often don’t know how they’ll pay rent, get childcare or retire. Even in our fractious America, that’s a large group with shared interests – decent wages, reliable work hours, affordable child and health care, and the means to enable a livable last couple of decades.

Never mind the 99 percent, why don’t we see the bottom 33 percent rising up? They’re the ones with the sharpest ax to grind with our current economic policies. We know there are major structural and economic impediments to them organizing and voting, but are there other reasons they're sitting on the political sidelines?

We recently completed an investigation to understand why and what to do about it. We wanted to know if there are new and better ways to describe poverty, its origins and fixes that could compel people to challenge the economic status quo. We sought unfiltered language from the people most effected and focused on frames that move those people to action rather than merely meeting the mushy middle where they are.

Through rounds of analyzing current discourse (from Sunday morning talk shows to Honey Boo Boo), listening sessions with people living below the poverty line, interviews with social justice advocates and a survey of over 1,700 Americans, here’s what we found.

The poor do not self-identify as “poor”

It’s not news that even people living well below the federal poverty line do not identify as such. But we were surprised by the extent of their alienation from this label as well as from the term “poverty.” Among the participants living at or below 200% of the federal poverty line, the terms “working poor” “working class” and “trapped in poverty” received middling ratings.

This helps explain why support for policies that address poverty in America have weakened over time: the people who could most benefit from them are largely not in the fight. And without their authentic voices, we confine ourselves to conversations about “those” people rather than hearing from those trapped without a job or in jobs that don’t pay the bills.

Movements for political power have never been built out of victimhood or false stereotypes; they’re built by those most directly effected standing up for what’s right.

From nouns to verbs

The way to overcome our current impasse is to speak to people’s lived experiences, rather than affixing labels no one wants to wear. This is hard for social movements reared in identity politics. Nouns like “women,” “queer,” “undocumented” are much easier to organize around. But in the cause of economic justice, we’ve got to latch onto verbs. Our top testing descriptors, especially among lower income respondents, evoke people’s daily life and ensure those “struggling to make ends meet” or “living on the brink” are active at the center of their own storyline.

Contrary to conventional wisdom, we’ve got an opening to build massive support for a progressive agenda to eradicate poverty. Here’s why: the number of us who believe you can work hard in America and still never get ahead is at an all-time high; in our study this sentiment got a 7.6 on a ten point scale among our total sample. At the same time, people’s anger at the greedy antics of CEOs and shareholders is at a historic high. With a mean of 8.2, no statement tested more strongly than “CEO's receive bonuses that are too high, and people are not being paid enough for the work they do.” Even Republicans in our sample gave this a mean rating of 7.

Nevertheless, Americans, particularly those at lower income levels, are skeptical that anything can be done about “poverty” and deeply distrust any institution as a potential agent of change. This, again, helps explain historic low turnout.

Our research suggests a potential solution to the messaging part of this challenge. We need to stop personifying the economy using language like “unhealthy” or “recovery.” Imbuing the economy with agency suggests it’s something we must stomach as is – a primary source of the hopelessness that breeds apathy. It also lends credence to the laissez faire voodoo our opponents continuously reboot in fresh packaging.

People in power cause our economic problems – and people can solve them. CEOs and politicians make rules that keep Americans trapped in jobs that don’t pay what it takes to raise a family. We must get clear on where our problems come from in order for our fixes to them to make sense. Our trouble is not convincing most Americans our solutions are right; it’s convincing them our solutions are possible.

We need to challenge our beliefs about what we can and can’t say. For too long the rightwing has mobilized the base using cuddly words like "family" to cloak for their anti-woman, anti-LGBT agenda. Progressives then shy away from these terms, fearing they evoke a white, heterosexual, nuclear family to the exclusion of others.

In truth, conservatives are getting crushed in values-centered debates. Marriage equality is winning precisely because LGBT people made the debate about commitment and family. When we stopped talking “rights” and started talking “love,” the tide turned. The immigrant rights movement has made incredible gains because we pivoted to language about keeping families together and the freedom to pursue life, liberty and happiness.

Family Comes First, our top-testing message, garnered a mean of 71 out of 100 among persuadable Americans and 78 with our base. By contrast, the best opposition message scored 65 with persuadables and 76 with their base. This shouldn’t surprise us. If you ask Americans (and we did) why they work and what they seek, you will hear a laundry list of progressive ideals tied to family: secure retirement for parents, brighter futures for kids, putting dinner on the table and being home in time to eat it.

While “family” tested most strongly, we also found our progressive messages do better when we lean into values that include community and freedom.

Struggling people are the agents of their own stories

In our politics, the economy rarely gets discussed through the eyes of struggling Americans because the victors are the ones holding the pens. The wealthy cast themselves as Horatio Algers, touting their individual successes. People who are poor are either omitted or held up as cautionary tales.

If we want to build a movement, we need to cast the millions of families striving in untenable situations as our heroes. Their stories show how the many can win against the money. And serious change will come only if we build a movement of poor people who are living every day with the gut wrenching realities of being paid less than it costs to live.

But when we tell these stories of economic struggle, we can’t lead with harms or privations. We must speak to the truth of people’s resilience and ingenuity in the face of near impossible odds. If we want to persuade the middle that people living at or near the poverty line are trapped by jobs that don’t pay enough, they first have to understand that these people are actors – not merely acted upon.

Alienating the opposition is not merely acceptable - it is necessary

Too often, politicians and advocates seek messages that will appeal to the most people, regardless of where they fall on the ideological spectrum. As a result, we end up with language that, at best, doesn’t excite and inspire the people we want to take action and, at worst, outright disempowers them.

We took a different approach, not contorting ourselves to please the other side. They’re our opposition for reason; they disagree with our analysis of the problem and our desired solution. Better yet, turns out the messages that alienate our opponents, fire up our base.

Some of the most fascinating moments in the research come from watching where the opposition dials down during various messages. Phrases like “every working parent should be paid enough to set their kids off for a bright future” and “a greedy few rigged the game in their favor, now too many jobs don’t pay enough for our needs let alone enable our dreams” send approximately 17 percent of Americans bolting. And to them we say: good riddance. This is the debate we want to have - especially since the rest of the sample that represents the vast majority of Americans -- actively embrace our views here.

These findings are fresh because we used new methods. Typically, if you want to hear what low-income people think, you put them in a focus group and see how they react to pre-fab language with the economy and the middle class at the center. We listened first and formulated winning words from the people most effected. They’re not talking about what will grow the economy; they’re talking about what their kid, mom or neighbor needs.

Unsurprisingly, these messages handily beat the business as usual Beltway messaging. It might seem rather obvious, but in Washington D.C. it bears repeating: The best way to figure out how to talk to people is to honestly listen to them.

We have a choice. We can continue to lament election results and the seeming lack of active constituency to make America less plutocratic or we can learn from hard data and reorient our efforts along lines we know will activate our base, persuade Americans in the middle, and call out those who profited from plunging us into recession and fight to keep clutching the spoils.

Jeffrey Parcher is Director of Communications at the Center for Community Change.