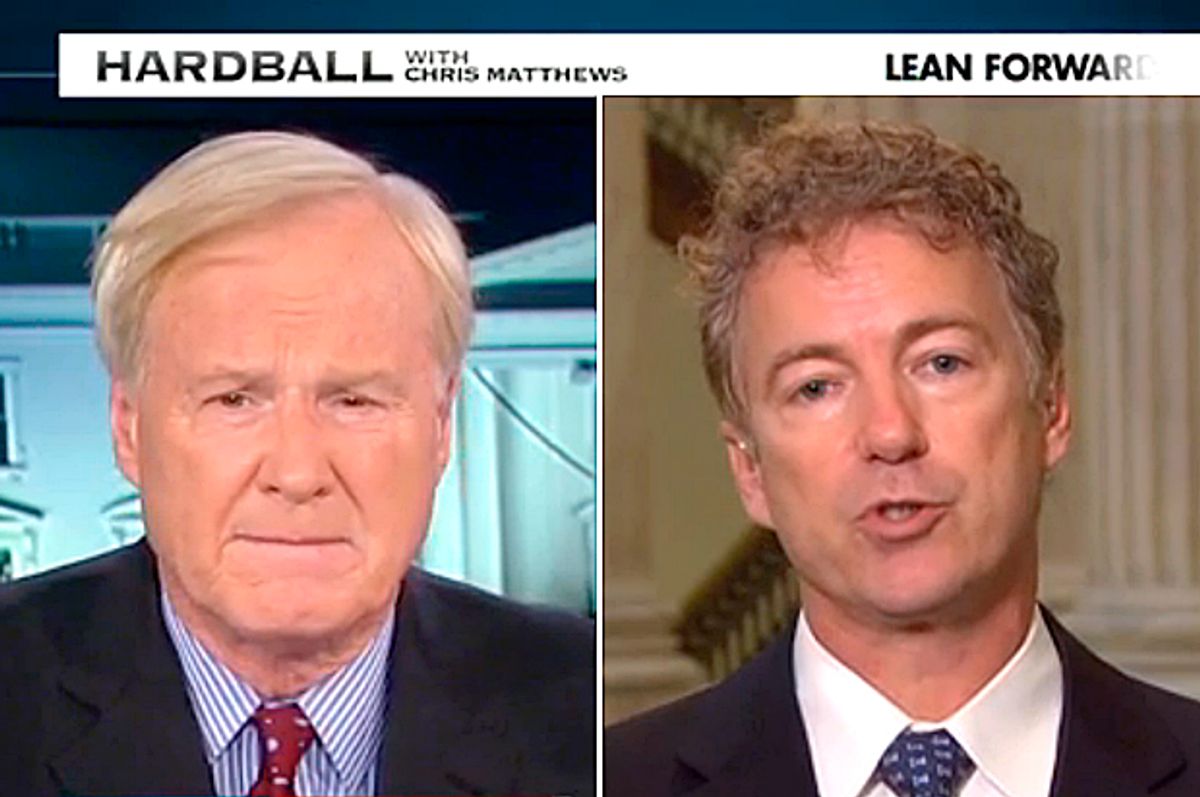 Journalists and comedians want an entertaining 2016 presidential race, and I’m sympathetic. I know people are going to prop up some folks I can’t get behind, but it’s all fair. Libertarian-minded liberals will say nice things about Sen. Rand Paul, and so might independent-minded folks like MSNBC’s Chris Matthews.

And most days, I think that’s great. Rand Paul would be an interesting major candidate in the 2016 Republican primaries. I like some of what he says about criminal justice reform. I’m glad he wants to reach out to, rather than disenfranchise, African-Americans. He’s not the worst potential GOP candidate.

But Paul’s response to Chris Matthews Wednesday about the Eric Garner tragedy shows that, for all his lovely words about African-Americans and criminal justice excess, he’s a standard-issue libertarian whose top issue will always be taxes. He’ll always be an anti-tax libertarian first and foremost, before he’s a civil rights libertarian.

Appearing on MSNBC’s “Hardball” shortly after a Staten Island grand jury declined to indict the cop who choked Eric Garner to death, on suspicion that Garner was selling loose cigarettes, Paul shamed himself, badly:

Well you know I think it’s hard not to watch that video of him saying ‘I can’t breathe, I can’t breathe’ and not be horrified by it. But I think there’s something bigger than the individual circumstances. Obviously, the individual circumstances are important. But I think it is also important to know that some politician put a tax of $5.85 on a pack of cigarettes so that driven cigarettes underground by making them so expensive. But then some politician also had to direct the police to say, ‘hey we want you arresting people for selling a loose cigarette.’ And for someone to die over breaking that law, there really is no excuse for it. But I do blame the politicians. We put our police in a difficult situation with bad laws.

There is so so much wrong with Paul’s answer on Garner. It’s a huge part of why he will never be president. What kind of callousness is required to say the "bigger” issue in Garner's death isn't excessive police use of force, or police practice toward African-Americans generally, but ... taxes? What kind of heart do you have to have to use the Eric Garner tragedy to rail against … cigarette taxes?

Beyond that, we don’t even know for sure that Garner was selling loose cigarettes at the time he was taken into custody and killed. Also, a lot of folks who sell loose cigarettes buy them cheap, and sell them for more than they paid -- but also pay taxes on them. It’s not always a tax dodge. So it's not even clear if Paul is right about the tax issue.

I’m not sure I can think of a case of a cop shooting anyone over selling something without charging/paying taxes, ever, in my lifetime. On the other hand, there is a very real issue of police using excessive force against African-Americans – cops are 21 times more likely to shoot a black suspect than a white one, and we have the real-life examples of Eric Garner, John Crawford, Tamir Rice, Ezell Ford and Michael Brown, just counting back to August.

That’s the “real” issue. To say the real issue is taxes is ludicrous. And it shows why Rand Paul is a ludicrous candidate for president, however entertaining he may be – temporarily; it won’t last -- to Bill Maher and Chris Matthews. I think he's got an intriguing and enviable strategic mind, but there is no heart or soul driving it. Or else he'd have expressed plain sympathy for Garner's family, and bewilderment about the verdict, on "Hardball" Wednesday -- and left his tax musings for another time.

Trust me: Rand Paul isn't going to wear well over the next two years.