"Trashed behind my back": Mark Leibovich on Christie, the art of the profile -- and why he's no Matt Taibbi 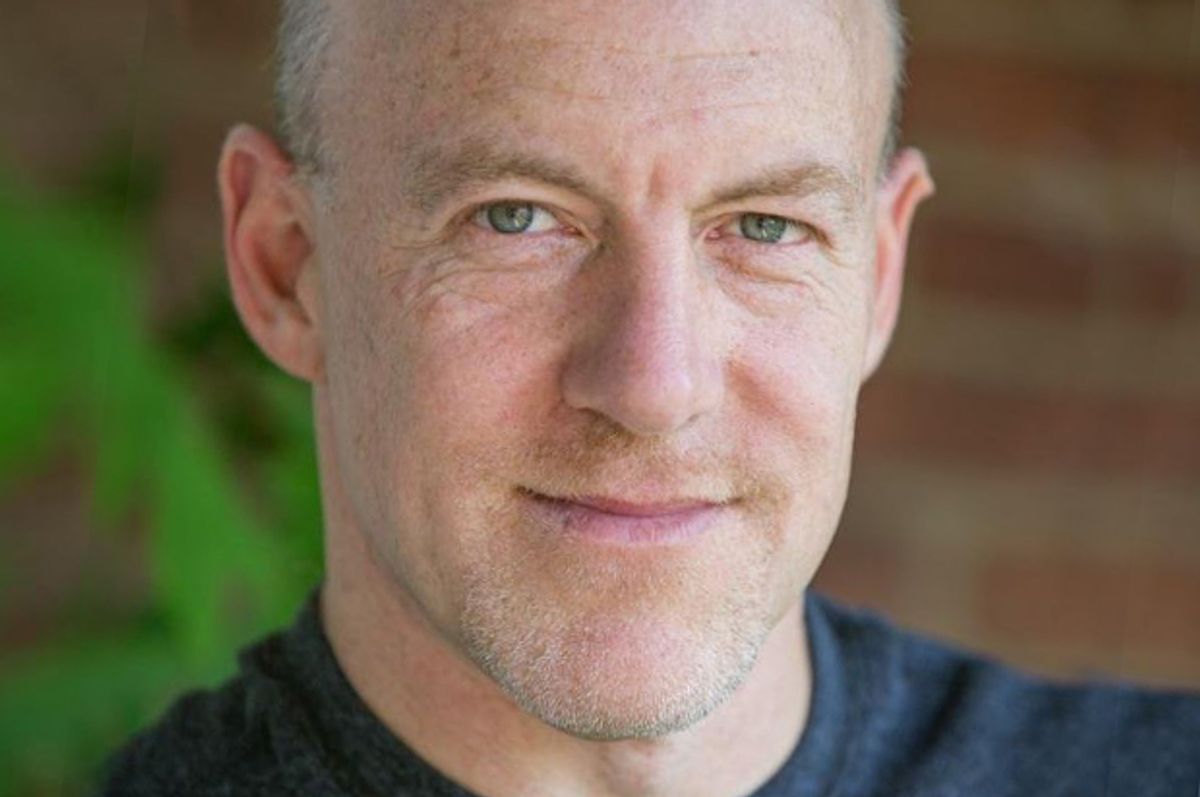 If you've ever seen or heard a self-styled jaded D.C. reporter snark about "this town" — the preferred shorthand for Washington denizens who want to signal that they're aware of the absurdity of life in what my colleague Digby calls "the Village" —  you have Mark Leibovich to thank (or blame). Because while D.C. had certainly been referred to in such a way prior, it was his 2013 best-seller, "This Town: Two Parties and a Funeral —Plus, Plenty of Valet Parking!—in America's Gilded Capital," that monopolized Villagers' dinner-party conversations for months.

Yet before Leibovich was known as the man who tried to hold a mirror up to the cocktail party circuit, he was writing penetrating, insightful and often funny profiles of some of American politics' biggest personalities and most influential players — like his latest, a nuanced treatment of New Jersey Gov. Chris Christie, for example. At the same time, the New York Times writer has also faced criticism for trying to have it both ways -- a self-styled D.C. muckraker who still manages to be a popular and happy participant in the very scene he claims to lampoon.

Recently, Salon spoke with Leibovich over the phone about his new book, "Citizens of the Green Room: Profiles in Courage and Self-Delusion" (a collection of some of his best and most enduring profile work), the treacherous game of the political profile and why he thinks Christie's "shtick" may not hold up during the 2016 presidential campaign. Our conversation is below and has been edited for clarity and length.

What was profiling Christie like? I’m not a fan of his politics, but I've found him to be a pretty interesting figure. Your pieces often focus on the blurry line between artifice and authenticity when it comes to public figures; did you see that going on with him?

He’s fascinating that way. I made the point, I think, in the story, that he presents [himself] as a very straightforward, blunt, tell-it-like-it-is kind of guy, but in fact he has said very little that’s been controversial or all that substantive lately. Being with him is really … There’s quite a bit of shtick going on. You can tell he believes a great deal in his persona, and he clearly enjoys the performance art of being "Chris Christie." I think that wears a little thin.

I think all politicians are, to some degree, giving you shtick, and I think that if you’re a reporter and you’re interviewing them, to think that you’re getting something completely unfiltered is naive and probably just wrong. I think the artifice factor with him is quite high, actually, and what’s striking about that is that it’s just so disproportionate to how he is perceived by his admirers and how he tries to present himself. In many ways, the most basic job of the journalist — in profiles, especially — is to live in the gap between the story they're trying to tell and, hopefully, a more real version of events.

Well, that brings me to one of the biggest questions I've wanted to ask you, which is, what is it about profiling people like Christie that you've found enjoyable or at least rewarding? It's not uncommon when you talk to journalists to find that interviewing pols is their least-favorite part of the job. There can be something alienating about it, knowing that they're trying to manipulate you, knowing they know you're trying to manipulate them, knowing they know you know they know, etc.

I don’t know. This was not part of any grand plan; I kind of fell into this, although I do think that so much political journalism is done from a distance. There’s this cult of embeddedness, of being part of the club. People tend to write in a way that suggests a level of insiderdom that I think they want people to mistake for intimacy or, at least, familiarity. It’s obviously a privilege to see these people up close, but it could be a real trap; there’s no question about it. People are on a certain behavior, they have an agenda, and when you’re actually in front of someone, the agenda is obviously front-and-center. Some of the best profiles I read are done with more distance, without any cooperation in many cases.

That reminds me of an I.F. Stone quote I just love: "Establishment reporters undoubtedly know a lot of things I don't. But a lot of what they know isn't true."

That’s a great quote. I'll have to go look it up when I get back to my desk.

But navigating that difference — the difference between access to and membership within the establishment — that can be a really hard tightrope to walk, right? What have you done to try to keep yourself on the right side of that line?

I think I’ve done it imperfectly. I’m as vulnerable to traps as anyone, and I don’t claim any great, heroic ability to stay on the right side of the line. That said, I think it really helps to be attached to a major news organization that people probably feel they need, or at least need to take seriously. I’ve been lucky in that regard, and I think if I worked for a publication that people didn’t feel they had to reckon with, doors would close. In some ways, that’s a level of protection that I’m not unaware of.

The other thing is just being among the fish, right? ... The conventions of political reporting, especially in Washington, can be very, very shallow; so it’s very easy in that I don’t want to be friends with almost anyone I have to write about. My wife is not in journalism or politics, and my neighbors and closest friends aren’t either ... But I think I’m human too, and you always have to grapple with the psychology of craving belonging and acceptance in a community — especially when you choose to live in a community and when the community can be so warping, as Washington can be.

When "This Town" came out, it was very well received and commercially successful. But at the same time, some people argued that it wasn't as disruptive to the D.C. elite as advertised. The idea was that you didn't really lose any friends because of it. Was that a criticism you expected to hear? And what's your response, if and when it comes up?

I don’t know if I expected it, but it’s out there and it’s valid in large degree. There are some parts of the book I wish were tougher, in retrospect; but I’ve definitely stepped on enough toes to have, I’d imagine, a fairly high number of people pissed off at me. I’m sure I’ve been trashed behind my back by people who didn’t like the way they were portrayed, and that’s all an occupational hazard.

That actually wound up being very premise affirming in many ways. It sort of created this backlash before the actual book came out; it was a bizarre situation, and I still don’t quite understand what they were trying to do. My only defense to those who would criticize it is transparency. I don’t claim to be a bomb-thrower or an out-of-towner who burns the village down — am I mixing metaphors here? Bombs and burning; whatever, you get the idea.

You’re not Matt Taibbi, in other words.

Yeah, exactly. And, look, I admire Matt Taibbi like crazy. I think the guy can write really, really well; I think he’s smart as hell and an extremely underappreciated reporter. I’ve never met him but I actually would love to meet him one day; I think he’s terrific ...

Some of the critiques of the book was that I was not more like Michael Hastings. I get that; it’s just not who I am. I tried to be both true to myself but also to try to make people uncomfortable. I’m a chronic second-guesser, so I’m always wondering if I could have been harsher here or was I too harsh there or whatever.

So, for this book, you had to go back and look at some of your most well-known pieces. Were there any of them that, in retrospect, read differently to you now than they did when they were written? Like, if you wrote something on, say, Bill Cosby 10 years ago, it'd probably be pretty different reading it today...

I remember the Jeb Bush piece I wrote in early 2003. I was all gee-whiz about a politician communicating by email. [Laughs] Like, wow, how unusual! But that does not seem all that interesting right now.

Luckily, I don’t have that great profile of Joe Paterno or Bill Cosby in my background that will be ridiculed — knock wood ... I’ve now written the piece that someone else headlined “Chris Christie Is Back,” and I will look like the total idiot when — I want to tell you that I did not write that headline.

Yeah, after I read the profile I wondered about that and figured that was probably the case. Divorced from the headline, that's not really the takeaway of the piece.

I know, but some people only get as far as the headline.

I think the profile you did of Chris Matthews has subsequently really influenced how people see him. Were there any others that you feel had a similarly lasting impact?

I just marvel at some of them. The John Kerry/Teresa Heinz one, I mean, I had just started covering politics then. I was just a few months into it and no one really knew who I was. They didn’t like the piece at all, and it was one of those things where I didn’t know why everyone was flipping out. These are really human people! How cool! [I thought], but one thing you learn really fast when you’re covering politics is that God forbid you should ever reveal someone to be human and different. My mother — who is not in politics — I remember her reading that and saying, “Wow, what a sympathetic portrait. They seem so familiar to us.”

Every profile is its own organism, and they each live and breathe in a different way. It’s pretty simple while you’re doing it; you just want to get through it and make sure you deliver something. Maybe you can be in a position to make it good, but I tend to be very survivalist when I have a big deadline in front of me. How will I survive?

In a lot of ways it's the same as it ever was, but in some pretty significant ways — mostly technologically, I suppose — political media is much different than it was even as recently as 10 or so years ago. Do you think those changes have affected your work?

Yeah, probably, just because of things like Twitter. I have been pretty heartened that there remains quite a good appetite for long-form treatments of people. I remember when I started, David Von Drehle, who was one of my mentors at the Washington Post, he said that the most memorable pieces are either really, really short or really, really long. That’s proven, I think, to be true. The really short form has become Twitter, but I have found that that appetite [for long pieces] is still there, which is really cool. I’m grateful for that; I hope newspapers and magazines and websites recognize that and will commission it.

But, look, people are people and character is character. There’s always going to be a fair amount of space between the official story and the story that you want to tell, the one that you think is more legitimate.