Eric Garner is just one example of black life devalued. Here's how white victimization is tearing the nation apart 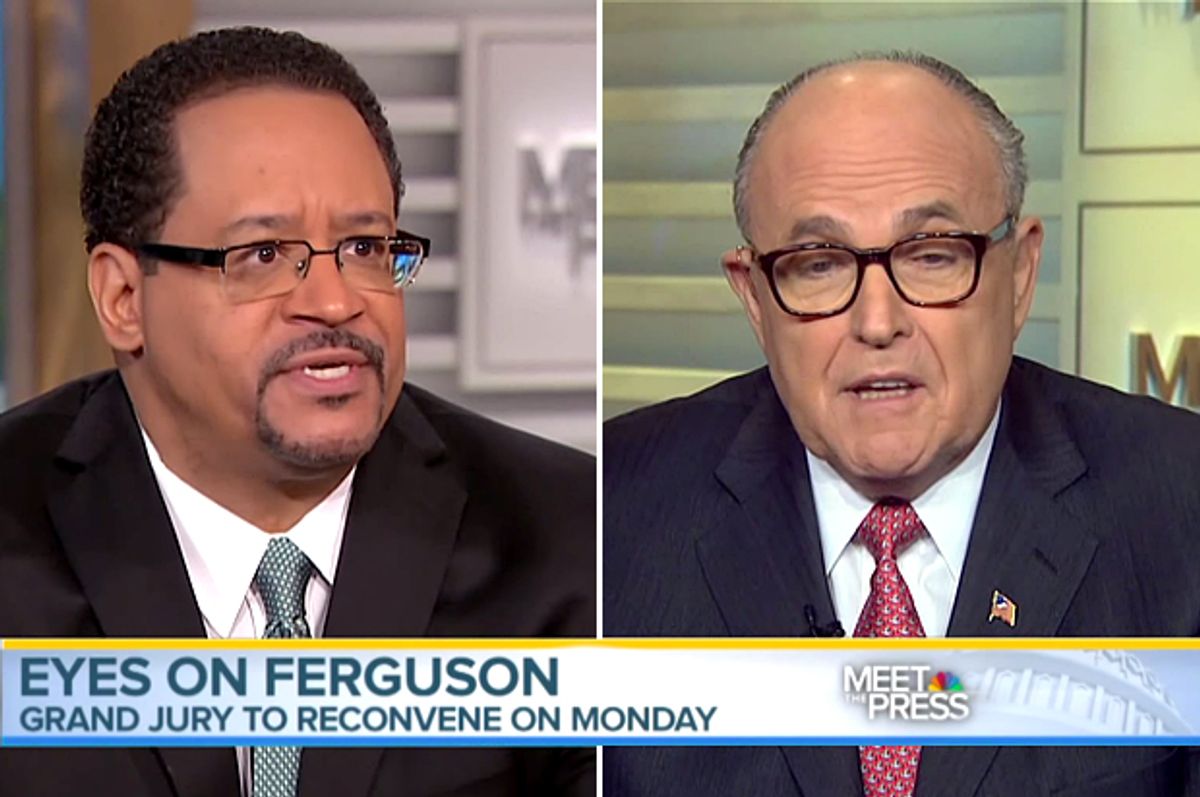 Yesterday a New York police officer named Daniel Pantaleo who was videotaped killing a man named Eric Garner using an unauthorized choke hold was found by a grand jury to have been justified in his actions. No charges will be filed. Garner was unarmed and his suspected crime was selling single cigarettes on the sidewalk. He never threatened the officers. His mistake, apparently, was in not realizing that failing to instantly capitulate in an appropriately servile manner would result in summary execution. He did not get a chance to live and learn.

And needless to say, just as some pundits characterize Darren Wilson as a victim in the Michael Brown shooting, there will no doubt be plenty of people rising to Pantaleo's defense as well. Turn on Fox News on any given day and you'll be convinced that white Americans can hardly get a break these days.

The ongoing conversation about race in the U.S. has evolved in recent years to include a lament from white Americans that they are the real victims of racism. Yes, that's a fairly bizarre interpretation of how our society operates but it's a surprisingly widespread belief among a certain sub-group of Americans. In some ways this idea goes all the way back to the Civil War when Southern slave owners felt they were being put-upon by non-slave owners by not being allowed to expand their institution into new states and so staged the most epic hissy fit of our nation's history. They always felt persecuted by people they believed were trying to destroy their "way of life," but the loss of that war was the catalyst for an ongoing sense of victimization, often believed to accrue to the benefit of African-Americans. The civil rights movement and resulting federal action to deny states and cities the right to discriminate further inflamed those feelings.  A part of white America believes, and has always believed, that African-Americans are at the heart of all their troubles.

Back in the 1950s and '60s the big victimization was white children being forced to attend public school with African-American children. We all know the story of how viciously some people fought that change.  Just as viciously they fought being forced to accommodate black people in business in the same way they accommodated whites. The denial of "separate but equal" was seen as a terrible affront to their decency, both because it required them to serve blacks but also because it made it appear that they were not decent people. After all, hadn't they gone out of their way to allow blacks to have their own separate society within which they would have all the same opportunities as whites. How could they be so ungrateful for that generosity?

In later years, white victimization took the form of opposition to affirmative action, an initiative designed to not only allow African-Americans and others (including women) who had been traditionally restricted from full participation in higher education a chance to catch up but to create more diversity on campus in anticipation of a more diverse society at large. This was seen as very unfair to whites who would no longer have the leg up to which they had always been entitled. That battle continues to this day as court rulings have substantially narrowed the ability of universities to employ affirmative action programs to ensure a diverse population and offer some extra help to young people whose communities and educational systems still suffer from the effects of institutional racism.

And now we have the latest iteration of this very old phenomenon: whites who believe that it's a racist act to point out their racism. The accusation itself is the racist act and in their minds much worse than whatever it was they were accused of saying.  Nothing is more racist than calling someone a racist.

This goes hand in hand with what is perhaps the most specious of right-wing commentary in response to these notorious incidents of white vigilantes and police officers shooting unarmed black teenagers: "Why don't you people care about black-on-black crime the way you care about this?" This is inevitably followed by the statistic that says more than  90 percent of all shootings of young black men are committed by other black men and delivered by the white person with an attitude that this somehow ends the argument. The fact that most crime against whites is committed by whites as well doesn't seem to penetrate.  Funny thing, but crimes seem to be more prevalent among people who live near each other. Go figure.  But what's most odd about this argument is that it's supposed to answer the charge that racism or racial profiling might be in play in these cases where a George Zimmerman or a Darren Wilson shoot a young unarmed black man out of what they say was fear for their lives. If the so-called black-on-black crime is the real problem, what are all these white men so afraid of?

Probably the best recent example of this "black-on-black" crime issue being used as a non sequitur to end the argument is the now notorious exchange between former New York City Mayor Rudy Giuliani and Professor Michael Eric Dyson on "Meet the Press" in which Giuliani interjected apropos of nothing, "I find it very disappointing that you are not discussing the fact that 93 percent of blacks in America are killed by other blacks. I would like to see the attention paid to that that you are paying to this and the solutions to that." Because he cares. He then went on to suggest that so many white officers wouldn't be shooting down unarmed black kids if the community would stop shooting each other. Again, this is an illogical point hinging on a PeeWee Hermanesque style of argumentation that comes down to "I know you are but what am I."

The truth is that conservative America cares nothing about so-called black-on-black crime. If they did they would be in favor of reasonable restrictions on the proliferation of guns in all of our communities. When it comes to gun violence, it's an equal opportunity blood bath. Eighty percent of gun suicides are white males. A gun in the house is over 40 times more likely to kill a member of the household than to be used in self-defense. And yes, in some cities a huge number of homicides are "black-on-black" and nearly all of them are committed with guns. As conservative David Frum pointed out in this piece on gun violence:

Thugs killing thugs? Maybe. But many of those seeming thugs are carrying guns for the same reason that people who consider themselves respectable carry them : in a futile quest to protect themselves with greater firepower. One person can find safety that way. But if two people carry firearms, a confrontation that might otherwise have ended in words or blows ends instead with one man dead, and the other man on his way to prison for life.

If conservatives care so much about "black-on-black" crime maybe they should do something about it: stop fetishizing guns and work to get some of them off the street. And who knows, it might even cut down on white people shooting unarmed black teenagers down in the street. It would certainly cut down on people of all colors shooting children of all colors by accident.

Meanwhile, the scourge of racism claims even more white victims. The latest news from Cleveland, where a 12-year-old boy with a toy gun was shot on sight last week, gives us white police officers who shoot black citizens filing suit against the city claiming that they are being discriminated against because they face more scrutiny and suffer more punishment than black officers who shoot black citizens. This is, apparently, more "black-on-black" violence that nobody cares about. Talking Points Memo has the details:

The lawsuit, filed Friday in federal district court in Ohio, alleges that one Latino and eight white officers were treated "substantially harsher" than black officers for shooting black residents, according to the Cleveland Plain Dealer.

"A serious dichotomy exists as a result of the defendants' longstanding practices and procedures which place onerous burdens on non-African American officers, including the plaintiffs, because of their race and the race of persons who are the subjects of the legitimate use of deadly force," the lawsuit reads, CNN reported.

The officers in question were evidently involved in a high-speed chase that ended with the shooting of two young unarmed black men, which cost the city millions in damages. No word on what the "black-on-black" police shootings got, but the price these officers paid was awfully steep:

The lawsuit filed Friday claims that the officers involved in the incident returned to active duty after they were placed on administrative leave and completed a cooling-off period, only to then be placed on restricted duty again for political reasons, according to CNN.

These officers were forced to endure the hell of being on restricted duty and for what? Shooting two unarmed citizens. The humanity.

It's always something. But somehow I think white America shall overcome.