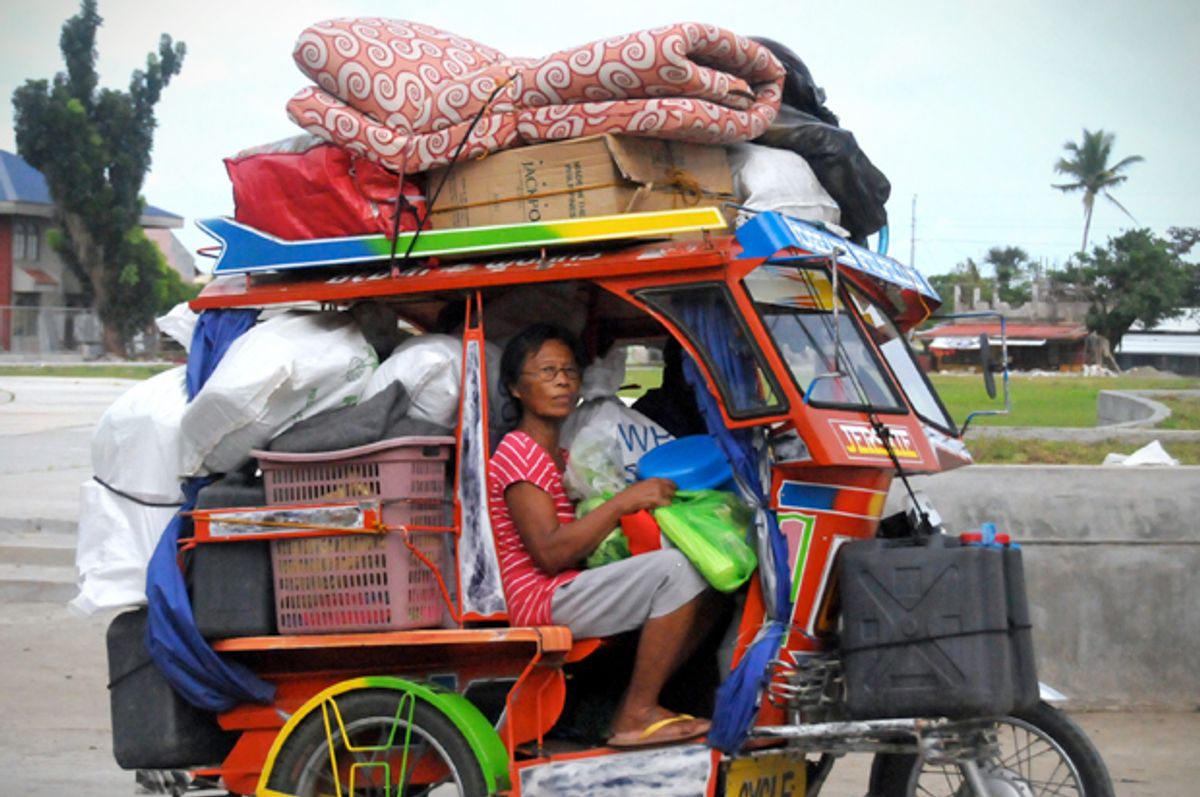 It's downright eerie to see the reports of a super typhoon heading straight for the Philippines, its shadow passing over the international climate negotiations taking place this week and next in Lima, Peru. It was just a little over a year ago, after all, that Yeb Saño, the island nation's delegate to 2013's climate talks in Warsaw, fought back tears as he described the damage that Super Typhoon Haiyan caused to his home city. The thousands of lives lost there, he charged at the time, along with the real effects of rising sea levels, melting glaciers and extreme weather throughout the world stood in direct defiance of "anyone who continues to deny the reality that is climate change."

Acknowledging that no single extreme weather event can be attributed to climate change, Saño spoke of the need for the world to take drastic action lest devastating storms become the new normal: "We refuse, as a nation," he said, "to accept a future where super typhoons like Haiyan become a fact of life. We refuse to accept that running away from storms, evacuating our families, suffering the devastation and misery, having to count our dead, become a way of life. We simply refuse to.”

Super Typhoon Hagupit, yet another major storm, is set to hit the Philippines Saturday; it's unclear whether it will veer toward Manila, or stay its current course toward Tacloban, where many are still struggling to recover from Haiyan. Saño, who was controversially dropped from this year's talks, has been nonetheless outspoken about the coming catastrophe on Twitter:

Again, this storm cannot be directly linked to climate change. Again, it stands as a terrifying reminder of what's at stake should negotiators fail to reach a meaningful agreement for curbing greenhouse gas emissions.

The feeling of history repeating itself arises in reports of the slow, sometimes frustrating progression of the negotiations as well. The talks in Lima, as in years before, continue to be tripped up by disagreements big and small: Thursday morning, they devolved into a debate between rich and developing nations over whether the draft text would be projected on a screen in order to facilitate line-by-line negotiations. "This is not unusual at this stage," Ben Grossman-Cohen, the senior press officer for Oxfam, told the media in a statement, "but clearly not a productive approach to move talks forward."

But if anything has changed -- or, to put it better, evolved -- it can perhaps be seen in the growing understanding, among delegates and those of us watching from home, that these talks are happening in a world already suffering from the effects of climate change, where talk centers not just around how to mitigate future warming, but how to deal with the impacts that are happening now.

And that they are happening now is undeniable. That was, after all, one of the major take-home messages of the U.N. report that dropped, in multiple parts, over the past year: "In recent decades, changes in climate have caused impacts on natural and human systems on all continents and across the oceans." Those linked to human activity, it adds, include fewer cold extremes, more heat records, an increase in "extreme high sea levels" and, in many regions, an increase in heavy precipitation events. Too recently for it to even be included in that report, researchers made the bombshell announcement this summer that the massive West Antarctic Ice Sheet appears to have entered a period of unstoppable melt; just this week, new research confirmed that a portion roughly the size of Texas has tripled its rate of ice loss over just the past decade.

The talks are also coming at the end of a year that, as the World Meteorological Organization announced on Wednesday, is on track to be one of the hottest -- and quite possibly the hottest -- on record. This year, said WMO secretary-general Michel Jarraud, was "consistent with what we expect from a changing climate," one in which “record-breaking heat combined with torrential rainfall and floods destroyed livelihoods and ruined lives."

Significantly, the WMO also reported record-high temperatures in the oceans, which absorb over 90 percent of the excess heat trapped by greenhouse gases in the atmosphere. It was another blow against deniers who claim global warming has "paused": “The provisional information for 2014 means that 14 of the 15 warmest years on record have all occurred in the 21st century,” Jarraud said in a statement. “There is no standstill in global warming.”

The news, added  Niranjali Amerasinghe, who's monitoring the talks on behalf of  the Center for International Environmental Law in Washington, D.C., "puts a finer point on the need for urgent and ambitious action.”

The science of global warming is clear, as it has been for some time. But you don't have to be scientist to see what's happening for yourself. Reports of a Philippines ravaged by a typhoon, or even of wildfires raging in drought-stricken California, are increasingly doing that work for us. "There's nothing like pictures and realities to change politicians' minds," Schmidt pointed out. "It brings it home for people, and makes it more real than just a piece in a scientific journal."

Real enough, perhaps, that despite the continued polarization of American politics -- and the unfortunate way that climate science is often warped by such politics -- 83 percent of Americans now believe that climate change is happening, and a smaller majority accepts, too, that human activity is to blame. According to Jake Schmidt, an international policy expert at the National Resources Defense Council, there's still a bit of a disconnect between what's happening in the real world and what's going down in Lima; but the signals sent out by the WMO, the IPCC and others, he told Salon, are at least being picked up on by the negotiators.

That's one reason, Schmidt added, that developing nations are pushing especially hard to make adaptation a central part of the negotiations. "It's one thing to talk in the abstract about needing to adapt in the future," he explains. "But when you're being devastated every day, the political urgency is having the tools to address the problem right now."  New research this week indicates that carbon dioxide emitted now will have its peak impact on warming within the coming decade, emphasizing the urgency of curbing those emissions as quickly as humanely possible; climate change will continue to manifest itself in untold ways between now and December 2015, when leaders meet in Paris to finally, hopefully, finalize a climate agreement.

And so it's the nations on the front lines of climate change that continue to put the onus on the world's major economies to take the drastic action scientists say is necessary to curb further warming. Denial is not an option when your home is already underwater, and neither are half-measures. The U.S.-China deal to curb emissions is an important step that demonstrated leadership, Amerasinghe told Salon, as are the $10 billion in contributions to the U.N.'s Green Climate Fund. Still, she added, the nations most responsible for climate change run the risk of spinning their efforts to look more impressive than they actually are. "While all of those things are good first steps," she said, "it's not enough. It doesn't demonstrate the kind of leadership that we really need to see."

That's a charge that will always to hang over such negotiations: for as long as the nations that have been emitting the most greenhouse gases for the longest amount of time differ from those most at risk from the consequences, "fairness" is an elusive goal. But the days in which we could look on, with regret, while developing countries brace for the impact are over. "There was this perception from the early IPCC reports that the main impacts were going to hit the developing countries hardest," Schmidt said. "Which is true. But if you're hit really hard -- even if it's not the hardest -- you've still got a problem. If you're sitting in a developed country today, it's pretty hard to say that you're not going to be severely impacted by climate change."