What happens when star athletes are accused of rape 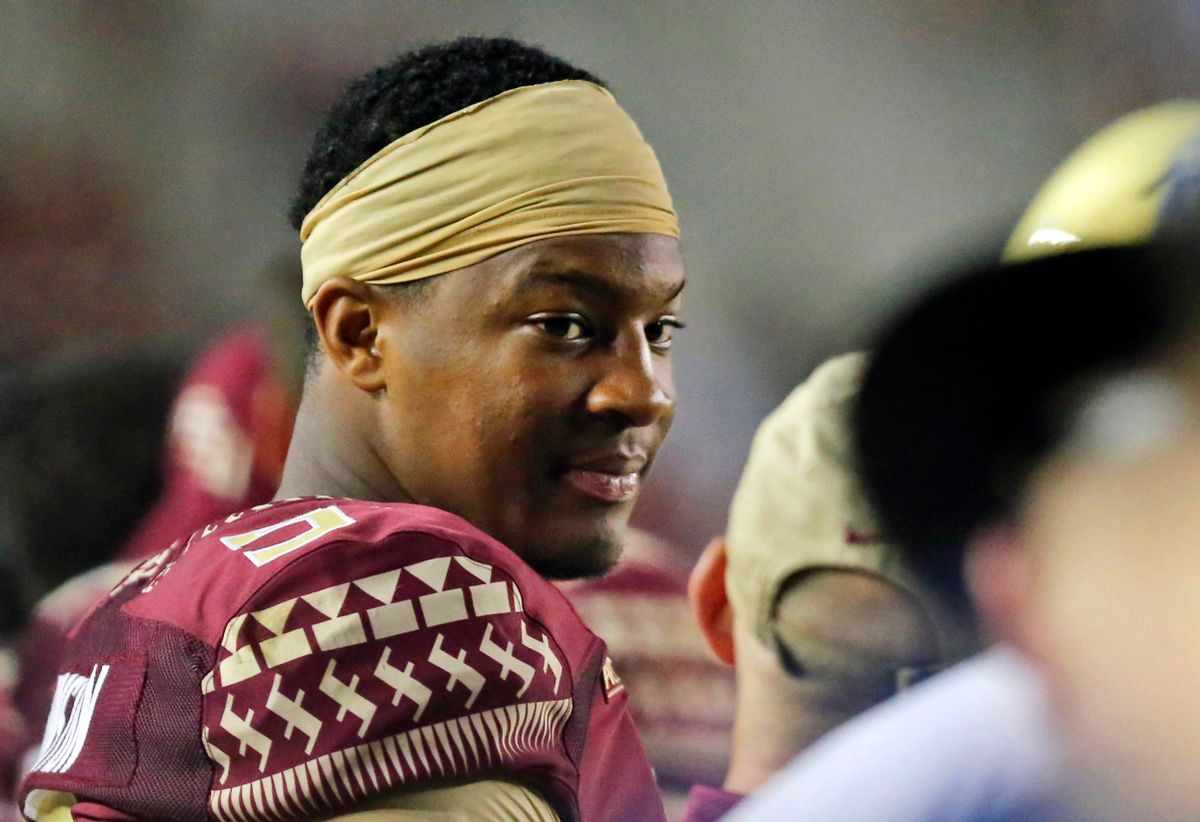 Florida State University quarterback Jameis Winston has long maintained his innocence in the face of sexual assault allegations first raised in December 2012, which have only recently culminated in a student code of conduct hearing for the football star. On Wednesday, Winston provocatively put a new twist on his assertions of innocence, claiming that "the only thing as vicious as rape is falsely accusing someone of rape," then painting himself a victim.

The player argued that his public profile has been and will continue to be badly damaged by the sexual assault allegations, and that could very well be true. But, Daniel Roberts writes for Deadspin, it's unlikely the case will cause many problems for Winston, given the historical reception of professional athletes who have faced sexual assault charges -- as well as the minuscule chance that the player was, in fact, falsely accused:

Let's put this in context: the odds that you will be falsely accused of rape are basically the same as the odds that you or someone in your family will be struck by lightning. Your odds of being falsely accused of rape are about the same as your odds of being attacked by a shark. Or, if you prefer to put this in football terms, your odds of falsely being accused of rape are substantially longer than the chances of the 2-10 Tampa Bay Buccaneers winning this year's Super Bowl. ... [This] is precisely why drawing an equivalence between rape and false rape accusations is so bankrupt. One is a pervasive social problem that affects millions; the other is a freak occurrence, like the birth of a two-headed calf.

Roberts goes on to cite numerous other athletes who have faced rape allegations that "were either proven, or at least not proven to be false" and then continued successful, highly lucrative careers -- Mike Tyson, Kobe Bryant, Ben Roethlisberger. He argues that Winston, who was allowed to forgo interviews pertaining to his sexual assault investigation until after football season, is more likely to fall in with that crowd, regardless of whether or not he's been falsely accused:

There are very good odds that Winston is guilty, though we'll never really know, given the endemic obstruction of justice in his investigation. There's no chance he'll go to jail now, but there was always less than a 10% chance that he would serve even a day in jail. Jameis Winston is projected as a first round draft pick in the NFL draft, where he'd be guaranteed millions of dollars. If he succeeds after that, there's no reason to expect that he'd be any less marketable than Mike Tyson, Mark Sanchez, or Kobe Bryant.

None of this is to say Winston is necessarily guilty of rape. He is, however, undoubtedly guilty of misunderstanding the nature of sexual assault, based on his dubious assertions at the code of conduct hearing. To conflate the injustice of having one's bodily autonomy forcibly violated with false allegations is an offense unto itself. Committing that offense, to borrow from Roberts, "is only further testimony to how dreadful Jameis Winston's character must be."

The rest of Roberts' essay is worth reading. Find it at Deadspin.