America's political narcissism: What Rand Paul, Sean Hannity (and even some liberals) forget

The left and right agree that Eric Garner was wronged. That's good—but here's what both are using him to talk about 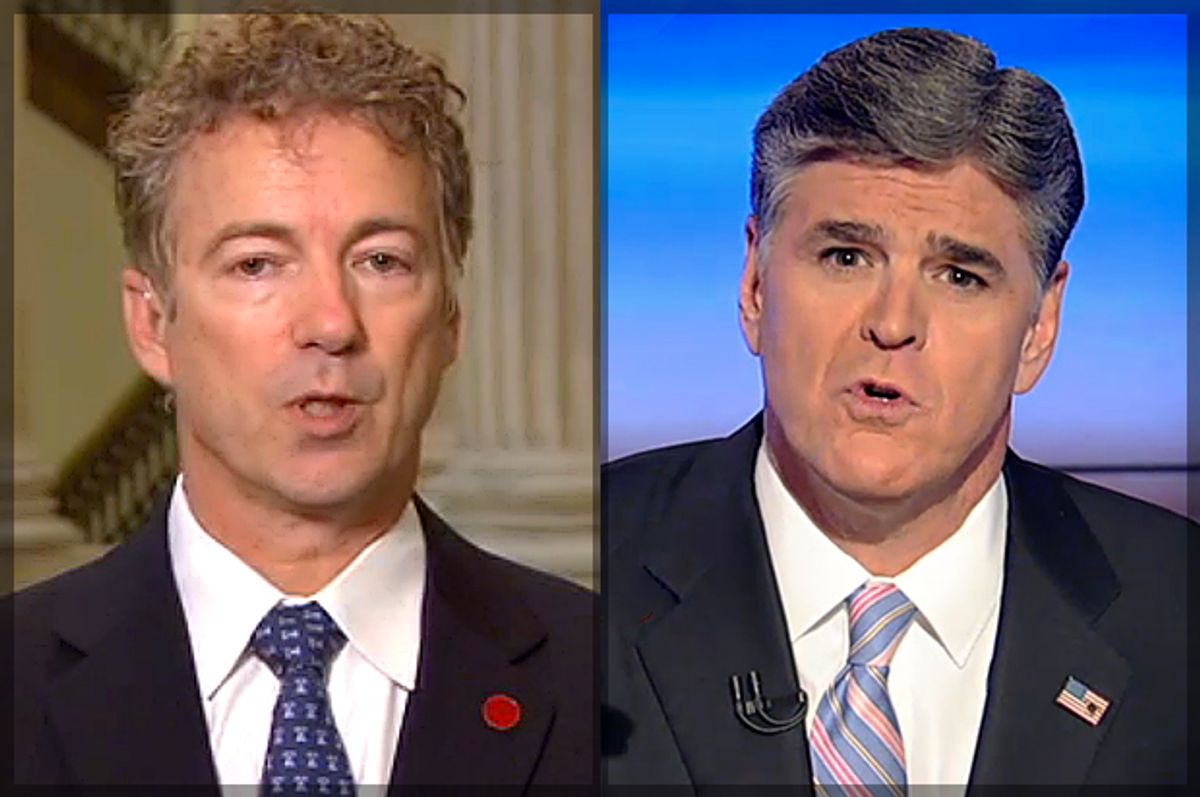 Despite its name, one of the defining characteristics of the United States of America has always been its many, many internal divisions. So as the public response to the exonerations of Darren Wilson and Daniel Pantaleo continues to play out, whether through peaceful acts of civil disobedience or more violent expressions of impotent rage, we shouldn’t be shocked to see the social fabric of our ostensibly united nation ripped along familiar lines of region, race and class. Symbolic references to struggles waged decades in the past — be it the fight to end slavery or to defeat Jim Crow — still grip us for a reason.

But as familiar as what we’re seeing right now in Ferguson, New York City and all over the country may be, the events of the past week — specifically the grand jury decision in Staten Island — have also introduced a new element into our politics, however temporarily: widespread agreement. Admittedly, this isn’t happening so much on the ground as it is among journalists and pundits. But the fact that folks at a hard-right publication like the Federalist are on the same page as those at the Nation is notable. And the fact that this is all over a controversy that touches on police brutality and race is downright remarkable.

Contrarian that I am, though, I feel compelled to note that hidden beneath all this self-conscious unity is yet another division, one that is mostly going unnoticed because it doesn’t rest on the usual political terrain. It’s not between liberals and conservatives, Democrats and Republicans, black people and white people, or the suburbs and the cities. In some ways, it’s not even political at all, but rather temperamental. It’s less about what we think of Eric Garner’s death than why we think it. At its heart, it’s the split between those who view Eric Garner’s death as a human tragedy, and those who see it as a vindication of their ideology. It’s possible for it to have been both, of course; but which one we choose to emphasize can be revealing.

When it comes to seeing opportunity in Garner’s death, it’s hard to find an example more arresting than that of Sen. Rand Paul, who has described the incident as yet another example of why his anti-tax, pseudo-libertarian philosophy is the solution to all of America’s ills. Appearing on MSNBC on Wednesday, Paul claimed that the true villain in the Garner story wasn’t officer Pantaleo, but rather some unnamed politician. “I do blame the politician,” Paul said before adding, “we put our police in a dangerous situation with bad laws.” But the bad law in question didn’t pertain to “broken windows” or NYPD training. It was — what else? — taxes. “I think it's also important to know that some politician put a tax of $5.85 on a pack of cigarettes [in New York],” Paul said. “So they've driven cigarettes underground so as not to make them so expensive.”

For those understandably puzzled as to why Paul would want to talk about cigarette taxes in regard to an unarmed man being strangled, his thin reed of a reason is that Garner was known to cops for repeatedly selling loose cigarettes, which is against the law. And indeed, it’s quite unlikely that Garner would have found the practice worthwhile if not for the high price of smokes opening up a niche in the (underground) market. But for Paul to say, as he did on MSNBC, that Garner’s death was because “some politician” told cops to arrest over selling loosies — rather than because of the racist history of both Pantaleo himself and the NYPD — is either disingenuous or ignorant. And it’s certainly ridiculous.

While it wasn’t surprising to see other conservatives run with the argument, it was disappointing to see Paul, who is abnormally rational for a politician of his stature when it comes to criminal justice reform, insist on folding Garner’s death into his usual government-is-bad framework. That’s not to say it wasn’t savvy; Paul is very likely going to run for president in 2016, and shifting the blame from a white cop (an archetype most conservatives reflexively like) to “the politician” (an archetype they reflexively hate) was a clever way to side with Garner without threatening any right-wing shibboleths. Yet using Eric Garner’s death as an excuse to sing the same song you sang yesterday and will sing again tomorrow is not a gesture of solidarity. It’s just another form of the same old dehumanization.

That much was made abundantly clear by Sean Hannity’s coverage of the controversy, which made Paul’s subterranean lack of concern for Garner as a human being grotesquely explicit. On his Fox News show Wednesday night, Hannity revealed that the grand jury’s decision not to indict Garner’s killer had made him “so angry.” Not because Eric Garner was unarmed, nonviolent and in no need of physical restraining, but because he didn’t understand the reason for “police officers ever arresting anybody for selling cigarettes in a city where you only get a summons if you’re caught smoking pot.” The taxes on cigarettes, which let’s remember are intended to discourage cigarette smoking, were, according to Hannity, “stupid.” In Sean Hannity’s mind, therefore, officer Pantaleo — who Hannity insisted was not using a chokehold, citing his experience “as a martial arts student” — is also a victim.

Earlier in this piece, I argued that the inability to fully appreciate Eric Garner as an end unto himself, rather than a means to an ideological victory, was not exclusive to the right. I still think that’s true, but I must admit that it was much easier to find conservative pundits making the mistake than liberal ones. In the less rarefied air of Twitter, however, it took very little effort to find self-identified lefties using the Garner tragedy as a way to broadcast their own progressivism. Most obviously, a hashtag that went viral soon after the non-indictment, #crimingwhilewhite, while no doubt originally intended to underline the injustice of racist policing, soon devolved into yet another embarrassing display of narcissism and privilege. As the Guardian’s Jessica Valenti put it, “There is a hierarchy of who should be listened to and read about the way race impacts lived experiences – and white people are on the bottom of that totem pole.” Just as Eric Garner’s death is not Rand Paul’s to use to slam big government, so too is it not right-thinking white people’s to use to signal their own virtue.

To be clear, this is not an argument against responding to high-profile news events with policy recommendations; I'm not proposing a liberal equivalent to the GOP and NRA's go-to line whenever there's a mass-shooting, that we should not "politicize" the event by proposing legislative remedies. As Mike Grunwald  and many others have noted, there's nothing at all wrong with responding to a tragedy or disaster by offering solutions you genuinely believe would prevent another in the future. The thing is, though, that this can't be done ethically unless the connection between the event and your chosen policy response is clear, direct and self-evident. If you honestly and reasonably believe that mandating background checks will stop the next Adam Lanza, it would be wrong not to say so. But retrofitting your hobbyhorse for the news cycle, as Paul and Hannity have done, is different.

Ultimately, Eric Garner’s killing, while obviously relevant to numerous political and social maladies, does not belong to anyone besides his family and his friends. It is not a morality tale. It is not the impetus for another “national conversation.” It is a moment in time when Eric Garner — a son, husband, friend and father of six children — demanded to be treated like a human being, and was greeted in turn with brute force and, eventually, indifference. As he lay dying on that Staten Island sidewalk, Eric Garner repeated a heartbreaking and now famous phrase: “I can’t breathe.” No one listened. Many of us still aren’t. It's time we start.