Searching for my parents in the afterlife

Before they died, I was a neglected child. I went to the psychic to give them one more chance to get it right 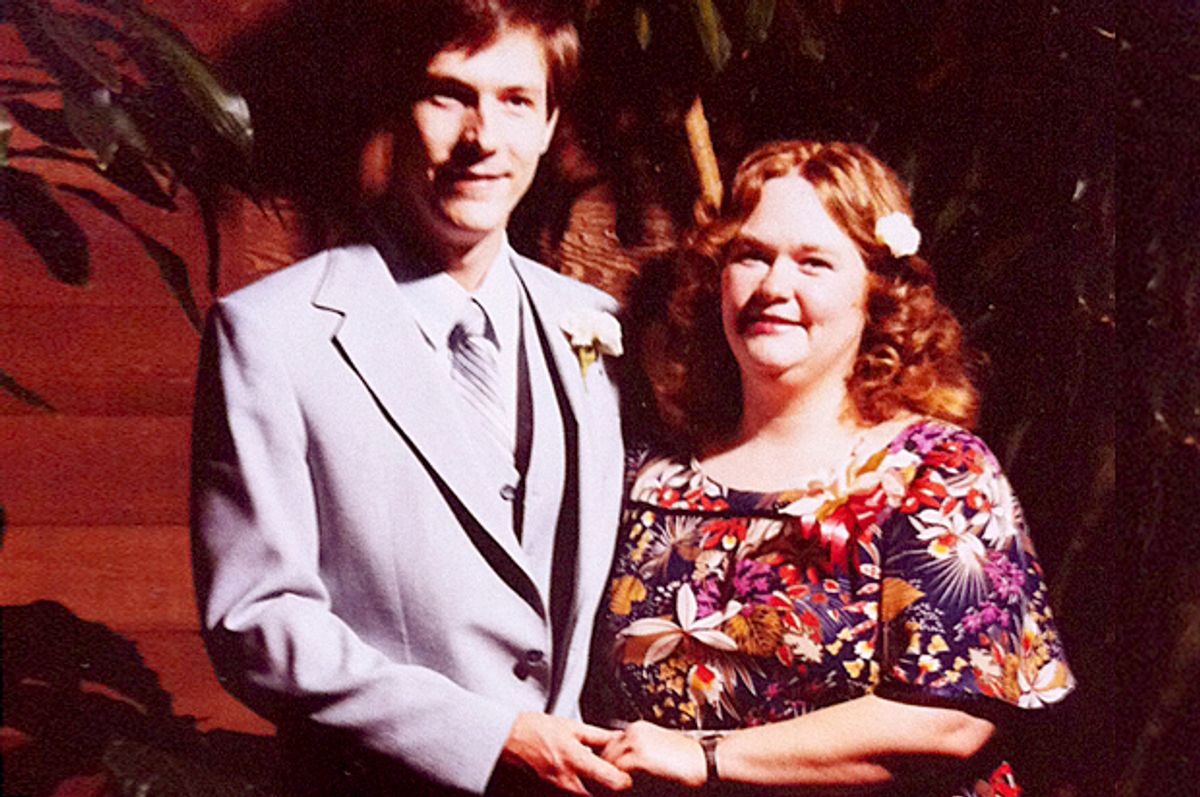 A photo of the author's parents
--

Waiting for my appointment with Kim, a psychic medium, I held two photos in my hand. The first was of my father from a camping trip we took when I was 7 years old. This is how I like to remember him, collecting dry branches to build us a fire, smiling a little devilishly while squeezing lighter fluid onto the flames, surrounded by the heavy Evergreens of the Pacific Northwest. The other picture was of my mom with her two best friends. I used to love when they would come over for all-girl poker nights or sewing parties, making dance costumes for me and my sister. My mom struggled with depression but was always happy when she was being social and making people laugh. There were good times but mostly my parents were narcissistic and non-participatory. Even though they both were gone while I stood outside waiting for my session to begin, in many ways, they were always gone. They were the ghosts now but growing up, my sister and I were like apparitions floating around the house haunting our own lives, begging for attention.

I looked down at my photos again. I missed my mom and dad’s faces, but still — I hoped that in the afterlife, everyone was wiser and kinder, that my parents would be more, well, parental, like life is a test but when you die, you find out all the answers you got wrong. Maybe now with Kim’s help, we had a chance to get them right.

I didn’t expect a fortuneteller to have such a nice, modern-looking office. I imagined the reading would be at her home or in some witchy store’s backroom, behind the beaded curtain. She’d be wearing jingling bracelets and have wide eyes with too much makeup on. But instead, there I stood outside a professional workspace, a grieving, 30-year-old orphan in need of guidance, clutching pictures of my dead parents, asking myself, What do I hope to gain from this? I’m not a skeptic but I’m not exactly a believer, either. As a teenager and in my 20s, I loved getting my palm read, a tarot reading, tea leaves, dream interpretation. I got readings every few months, sometimes more. But I had never seen a medium before, the distinction being that a medium is someone who can talk to dead people or spirits.

Growing up, my parents were too caught up in their own problems — alcoholism and food addiction mainly — to dole out precious pearls of wisdom. Eventually, years of heart disease and diabetes caught up with my mother but I still needed answers. I wanted to know what career path I should follow and did my crush like me back and, most important, would I ever get money? That was my favorite. Just money — from I have no idea where. If I didn’t like the answers I got, I became trepidatious. If I liked what the psychic told me, I drank that Kool-Aid up. That was my pattern. I selectively believed in mystics when it worked to my advantage. Sometimes I needed people besides my friends, to point me in the right direction or inspire me to be brave. I turned to these tarot readers, these clairvoyants and fortunetellers for help, and though I questioned their “gifts,” most of them were extremely kind and encouraging. If only they had taught me how to cook, to manage money, to believe anything I want is possible.

My parents divorced when I was 5. I saw my dad on major holidays and some weekends here and there when he wasn’t drinking or, rather, was hiding it well. His refrigerator rarely had more than condiments in it and I slept on the couch in a cloud of cigarette smoke. He would give me advice like, don’t ever let boys touch you or an AA meeting-inspired live one day at a time. After I hit puberty, he barely spoke to me. Also, around that time, my mother’s interest in me waned dramatically. My ambitions, my grades, my extracurricular activities, even my friends and whereabouts were fine to remain a mystery. My moral compass was carved by TV programs like "Growing Pains." I longed for routine and needed boundaries. I wanted to eat dinner with the Seavers and jump in a big pile of leaves I’d rake out in the backyard with Alan Thicke. I’d listen to his pearls of wisdom and later get his help with my algebra homework. Maggie and Carol would fix my hair while I got ready for my first school dance. Sometimes, I even wished we were religious, imagining the feeling I had after a psychic reading was what Christians felt like after church: a sense of belonging and that somehow, some way, everything is going to be OK.

Kim opened the door right at 4 p.m., our scheduled time. She looked much more like a yoga instructor or a Whole Foods shopper than Miss Cleo from late night TV.

“Are you Amber H.?” she asked. “I only have my assistant give me your first name and the first initial of your last name.” I immediately assumed she told me this so I wouldn’t think she had Googled me. Not off to a great start.

She escorted me in, asked me to sit and take a moment to quiet my thoughts. The inside of the room felt comforting, like a therapist’s office. There was a small couch, a coffee table with a few lit candles, her neatly organized desk and a bookshelf full of every book ever written on religion, quantum physics, the healing power of crystals, everything your woo-woo loving heart could ever dream of. She asked me to speak my full name aloud three times. I had to stifle my urge to say, “Beetlejuice-Beetlejuice-Beetlejuice.” I had to take this seriously. What if she was able to contact my mother? My father? What would I actually say to them if they were alive again? Or at least, as alive as she could make them seem. I had waited months for this appointment and it wasn’t cheap, either. Maybe she could contact my parents and tell me what I longed to hear; that I was loved, that I am missed, that they are around me giving me protection and guidance now. I could almost taste the sugary Kool-Aid.

“Any significance to the number 5?” Kim asked. “Five siblings? The month of May?”

“Nope, no and negative.”

“I feel like your father is around you,” Kim said. “But you’re too young to have lost your dad.”

“He died when I was 16,” I told her. I thought about him in Mexico, how he drowned on his vacation.

“Don’t tell me the details,” she interrupted. Then, more calmly, “But your mom — she’s still alive, right?”

This was not going well. And yet, I sat there, wanting so badly to believe, the pictures of my parents in my hand like little wishes.

Can I have these, please? I wanted to say, holding my photos like magical trading cards. Can I hear my mom’s laugh? Can I stay warm by this fire and breathe in the smoke from my dad’s cigarette?

“I brought these,” I said, handing the pictures to Kim. I wanted to cry. I felt sick and stupid. I wanted to tell her to be more psychic, make them alive again! My grief always hits me like a wave of nausea.

She took the photos and began to study. I could tell she was frustrated that I had no Frank, no James, no deep connection with the number 5.

“Why are you here?” she asked. “Do you just want a general life reading?”

Of course I wanted to know about my job, my crush and will I ever get money, but I was there with Kim because I wanted to hear that my parents had loved me, that I had mattered to them. Maybe my mom would say she’s proud of me, that she has no idea how I turned into such an amazing woman. She could say she was sorry for missing my school plays, for asking me if I would ever do pornography (No! Never, ever!), for not paying attention. Maybe my dad would tell me he wished he’d tried harder to be strong.

Kim closed her eyes for a moment. It looked like she was praying or concentrating hard. Then, she opened them and looked at the photos again. She suddenly felt “spirit.” She told me my dad was around me all the time, wanting me to be happy. It was a pretty generic thing to say, but I wanted to believe it. Then, she got to my mother. She said it was hard for her to “come through.” She said my mom was not sorry for how she raised me, that she did the best she could and I turned out fine. Kim said my mother was completely blasé, like — why am I even here? Even in the afterlife my mom couldn’t be supportive! I imagined her in her own personal heaven — reclining in her La-Z-Boy, eating popcorn, watching prime time.

“I can feel them,” Kim said. “They’re here. They want you to be the best version of yourself that you can be,” she said. “They want me to tell you, you’re free.”

The scent from the candles was filling the room, earthy sandalwood. I took a long, deep breath. I felt foolish for wanting this to be so real. I looked into Kim’s eyes. They were sad but compassionate. She smiled wishfully, hoping I was satisfied. She wasn’t psychic but she gave me what I came for: permission to let go of my resentment and accept my parents for the people they were. To know that I am fine — that somehow, some way — everything is going to be OK. I’m free to do whatever I want and be whomever I want. I’ve been free all along.

I left Kim’s office a happier woman, but I don’t think I’ll get a reading again. Life needs a few mysteries like, where is my career headed? Does my crush like me back? And will I ever get money?