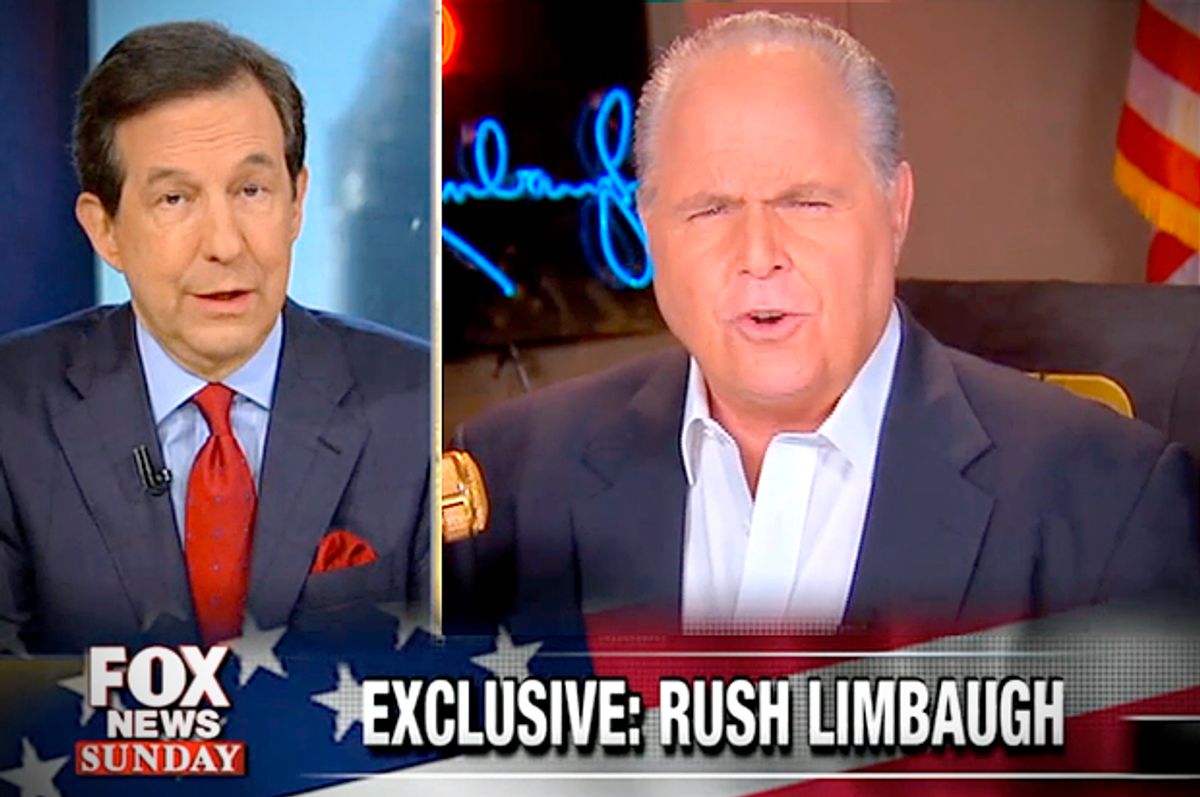 The two most powerful institutions of the modern Republican Party clashed Sunday, over the politics of immigration and, specifically, using a government shutdown to block President Obama’s executive action on deportation. Rush Limbaugh traveled to the confines of Fox News to debate one of the network’s few sober voices, Chris Wallace, for his first visit to the right-wing network in five years.

Their conflict laid bare the enduring chasm in the party that won big in the 2014 but can’t figure out what to do with its victory. As GOP leaders prepare to try to mollify the right with a spending bill that funds the Department of Homeland Security only through March, but the rest of the government through next September, Limbaugh showed no sign of accepting the compromise.

Of course Wallace was most interested in the radio bully’s attacks on his network. “You've been criticizing Fox News for some of the commentary here that says that the Republicans in Congress should not shut down the government over their opposition to the executive action on immigration that the president took,” Wallace noted. Like many establishment Republicans, he focused on polls showing the party’s approval rating cratered after the October 2013 shutdown – and Limbaugh blew up.

“They won a landslide election 10 months after that so-called shutdown,” Limbaugh said, botching his math in his excitement (it was 13 months). Then he went off:

RUSH: What does it matter? They won. The point is this is a trick. I think the shutdown's a trick. You know what? Here's what it really means, Chris, that Republicans want what Obama wants on immigration, and they are using the government shutdown as an excuse to not stop him because the truth of matter is they agree with him. Romney agrees with it, Jeb Bush agrees with it, the Chamber of Commerce agrees with it, obviously. The Republican establishment doesn't want to stop Obama on comprehensive immigration reform.

WALLACE: Do you think John Boehner and Mitch McConnell agree with that?

RUSH: I think it's ridiculous, and the American people are being let down here. They're voting. They're expressing their desires. They want this stuff stopped and the Republican Party is not listening.

Limbaugh brought the lies, of course, claiming the "only thing that happened in that shutdown was Barack Obama closed [...] the World War II Memorial to World War II vets" and "shut down some White House tours." In fact, the shutdown cost $24 billion in lost economic activity and idled tens of thousands of government workers (though they eventually were paid).

Though they disagreed about shutdown politics, Wallace handled Limbaugh like visiting royalty, interjecting whenever there was a hint of disagreement, with sweet nothings like “I ask this with all due respect, we're friends” and “I hate to move you along because I love listening to you, but I do want to move on to another subject.”

The Fox anchor started the interview on an issue where the network and Limbaugh agree: the bad behavior of civil rights advocates protesting the grand jury decisions in the police killings of Mike Brown and Eric Garner. “The president, if you ask me, could do a lot to stop this by telling people to respect the criminal justice system,” Limbaugh told Wallace.

Of course, the president told people exactly that, opening the statement he made immediately after the Ferguson decision by declaring, “First and foremost, we are a nation built on the rule of law.  And so we need to accept that this decision was the grand jury’s to make.”

Limbaugh also used his favorite imagery to express his racial paranoia -- bending over, in this case backwards – to describe how the country is being unfairly accused of racism. “The 1964 Civil Rights Act, affirmative action, we have bent over backwards” to improve conditions for African-Americans in this country, he told Wallace. You’ll recall that after Obama’s election, the insecure host fretted that he was expected “to hope [Obama] succeeds, that we have to bend over, grab the ankles, bend over forward, backward, whichever, because his father was black, because this is the first black president.”

The interview closed on a cordial note, with Wallace letting Limbaugh flack his hilarious children's book "Rush Revere and the American Revolution." After Limbaugh promoted his "labor of love," Wallace kvelled, "Not surprisingly, it's No. 1 on the New York Times children's book list." And that's how the big debate ended. "Thank you. Thank you for joining us. It's always good to talk with you. Please come back. Let's make it sooner than five years." It's not clear the fight within the GOP will end as cordially.