Last night's disastrous "Newsroom" rape plot: How Aaron Sorkin is losing the fight with himself 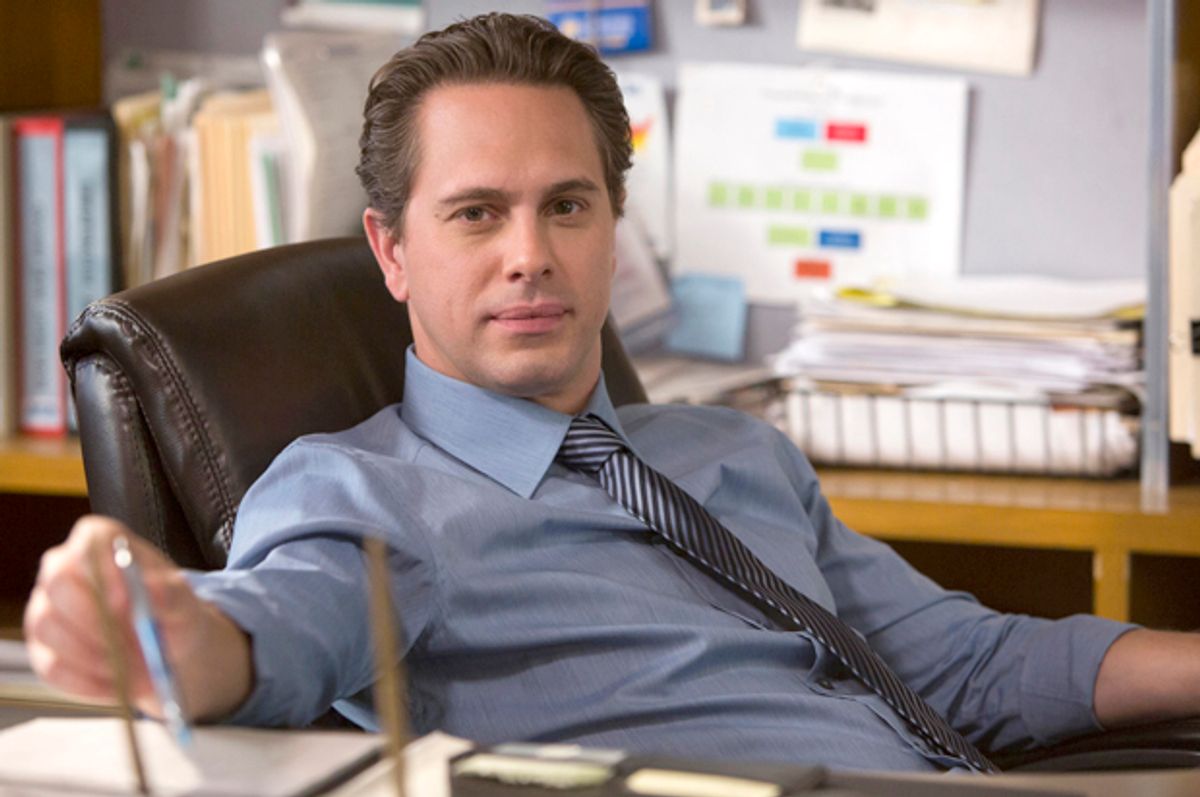 Last night’s episode of “The Newsroom” — the penultimate episode of the series — was a disaster. The most upsetting and egregious disaster was the exchange between news producer Don Keefer and a rape victim named Mary; Don comes to the conclusion that even though rape must be hard, “morality” dictates that he has to believe her and her “sketchy” rapist equally. And he says he’s innocent, so hey, done deal, sorry, Mary, thanks for playing. Numerous critics have already done an excellent job of breaking down exactly what was wrong with that subplot — Emily Nussbaum at the New Yorker, Tara Ariano at Previously.tv, and Libby Hill at the A.V. Club. And if that seems like a lot, that’s because there’s a lot to be said. The patronizing overtones of Don’s conversation with Mary leave a nasty aftertaste.

It wouldn’t be quite so spectacularly catastrophic if it weren't for the fact that so many of showrunner Aaron Sorkin’s characters are stand-ins for him — especially the white men, who are often portrayed as crusading heroes, sallying forth into a world full of charlatans and hypocrites to lay down the basic tenets of truth, justice and the American Way. “The Newsroom,” as I’ve argued before, is a superhero show. And in Sorkin’s fantasies, his heroes act out his own grand ideals — at work, in relationships, with their families, with their God.

“Oh Shenandoah” is not just a bad episode of television, then. Because the style of “The Newsroom” is so over-the-top, “Oh Shenandoah” is a spectacular, flaming, operatic failure — one that does basically every wrong thing, escalating to such heights of dramatic absurdity that in the episode’s climax, Sam Waterston’s Charlie Skinner literally drops dead. Sorkin doesn’t go by halves; the death is punctuated by the titular folk song — in a particularly dirge-like rendition — over a slow-motion montage that closes out the episode.

Which is why, to be perfectly honest, some part of me sort of enjoyed “Oh Shenandoah.” The conversation about rape is painfully wrongheaded, and look, when Charlie died, I laughed out loud. But on the other hand, it felt like it was going down in a blaze of glory — a conflagration of Sorkinese, so white-hot in its self-righteous fervor that it consumed itself alive.

And I think that’s because Sorkin’s bidding farewell to television by bidding farewell to his own egotistical high-minded idealism, going out in a blaze of hyper-Sorkinified glory. When this season premiered, Sorkin told the Los Angeles Times that “The Newsroom” would be his last television show. Whether or not that’s true, he believed it to be true when he was writing the last six episodes of the show. And in “Oh Shenandoah,” the penultimate episode of the series, you can see the edges of Sorkin beginning to unravel.

That rape conversation feels like part of it, for example. It’s so wrongheaded — and so sure of its rightness, so paternalistic in how Don tells Mary he wants her to do what he says for her own good — that it’s surprising how much Mary gets to make her case to Don. Her case is way, way more persuasive; where she uses the force of her own traumatic experiences, Don just looks mildly disappointed and cites a moral imperative that feels like it has no weight, and comes out of nowhere. It’s elsewhere, too: Will McAvoy carries on a long conversation in his cell with another convict, who turns out to be the specter of his dead father. The father is a predictable checklist of Things Aaron Sorkin Hates: closed-mindedness, suspicion of the elite, anti-Semitic, Republican. Will’s dad abuses his wife and is a shameless drunk, and he mocks his son for quoting Don Quixote and tossing around where he went to school.

It sounds like every other conversation Sorkin has set up for his heroes, at first. As Nussbaum says in her piece, “The Newsroom’s" heroes often are having exchanges with ciphers for huge ideologies that barely manage to make more than 15 percent of their case — meaning that functionally, Sorkin’s heroes always won, because they always could get the upper hand. But as the show’s gone on, they’ve ceded more and more ground; what’s alarming about the much-discussed conversation about rape is that Mary makes so much of her excellent case and is still “proven” wrong.

With Will’s father in his head? Will doesn’t win, because he can’t, of course. His father is dead. But even in his head, even in Will’s fantasies, his father doesn’t cede any ground. He interrogates Will; neither side ends up convinced of anything. In a show that specializes in grandiose, public takedowns — witness, just in this episode, Sloan Sabbith excoriating one of her co-workers on television, just to prove a point against a fictional software that has not existed in the real world for years — that non-argument feels almost revolutionary.

It’s there with the other Sorkin-surrogates, too. Jim Harper, who was in the first season positioned as the boy-hero of the show, has slowly soured into one of the show’s most despicable characters—an asshole who can’t support his girlfriend through a career change because he won’t shut up about “principles” long enough to take a stab about human intimacy. In this episode, Jim’s principles are literally fridged, as he and his longtime hate-crush Maggie end up not only confirming that they’re both not only terrible enough for each other but that they’re not that great at their jobs, either: After spending hours tracking down Edward Snowden, they get it catastrophically wrong, and sit on a plane to Cuba feeling sorry for themselves (well, and kissing). Neal, the only non-white Sorkin-surrogate in the show, is so diminished that he’s literally off-screen and in Venezuela for the entire episode. And Charlie Skinner — the most improbable media character television has ever seen, playing a part from 1935 in a newsroom ostensibly set in the 21st century — is proven to be so superfluous to the modern world that he drops dead in the middle the newsroom, in what James Poniewozik memorably called “deathsplaining.”

So who reigns in the stead of these heroes? Well, there’s Sloan, who is ably anchoring “News Night” without Will; there’s MacKenzie, who’s managed to keep her job and not go to prison; there’s Maggie, who’s finally browbeaten Jim into loving her. There’s Hallie at the fictional website Carnivore, making a good career for herself, as even Jim grudgingly admits; there’s Mary, who will continue to run her website for rape victims, with or without ACN’s help.

Sorkin has always been a writer intensely aware of his critics, and in this final arc of his last TV show, it feels like he might be admitting defeat. He carried on the fight for a while — and it was a good fight — but the time of white knights leading us to victory is over, just as Don Quixote’s story came to its own tragicomic end. So why not go out with a bang? If you're going to tilt and windmills, at least let them be really big windmills.

For all of Sorkin’s raging against citizen journalists and the Internet in this week’s episode, as he lays down his sword, he also pays homage to the one “citizen journalist” who used the Internet to more devastating effect than anyone working within the American system, than anyone working at ACN: Edward Snowden, who embodies everything Sorkin can’t stand about the world. Snowden flouted authority and fled America and worked outside the fourth estate (and the first through third, for that matter) to do what is, in all likelihood, the single most effective play for transparency in government since the Pentagon Papers. And maybe that was the final straw for Sorkin. His plane is going 600 miles away from the story. So he’s put down the sword in favor of holding hands and grinning in two adjoining seats. It’s time for someone else to pick up the fight.