My Whole Foods nightmare: How a full-time job there left me in poverty

Despite the corporate talk of "team" and "love," here's what working there was really like -- and why I had to quit 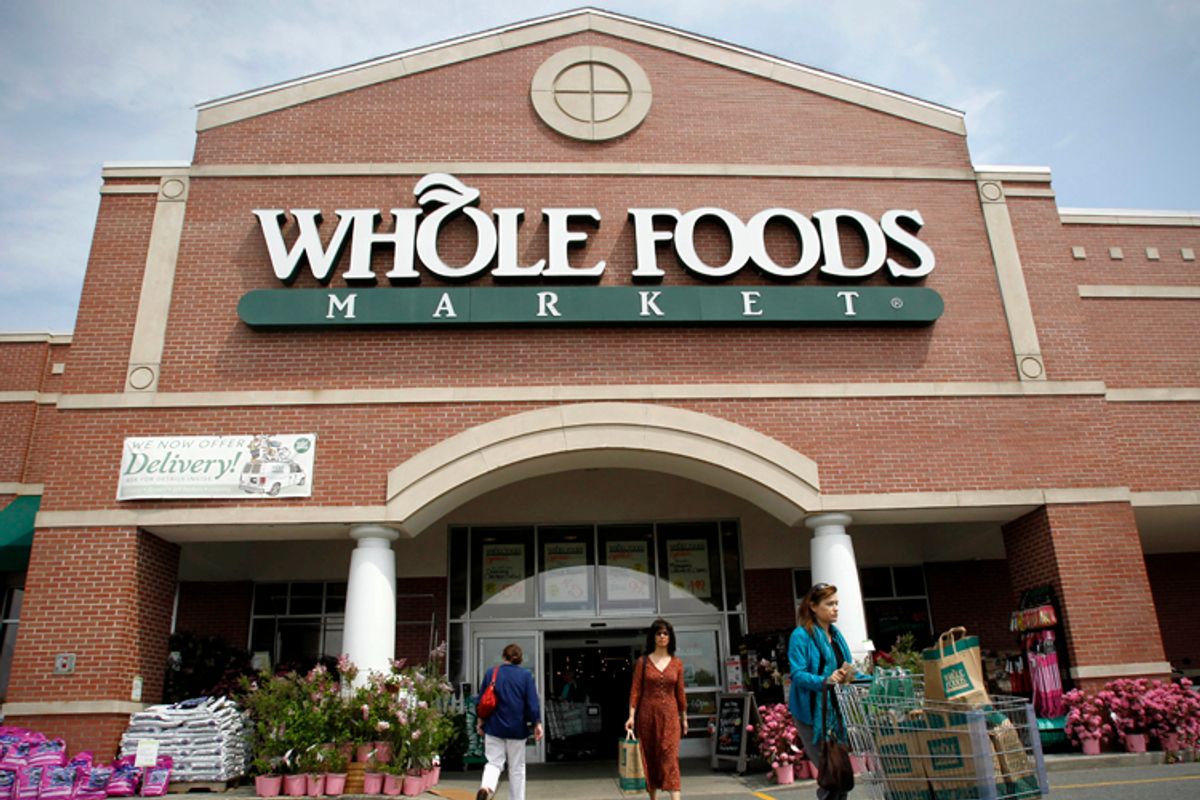 After years of organizing in secret, building bonds over beer and supporting co-workers when issues have arisen with management, team members at a Whole Foods Market in San Francisco disrupted the normal workday and demanded a $5 an hour pay increase last month. More than 20 employees beckoned store management to the floor and presented a petition signed by more than 50 of the store’s workers calling for more paid time off, better health and retirement benefits as well as steady, consistent schedules.

I worked at Whole Foods in the spring of 2012. As is the typical way of getting to know co-workers, I went out for drinks with a tight-knit group of employees. Conversations went quickly from the getting-to-know-you banter to politics, and it was at the time the Occupy Movement was running out of steam. We exchanged battle stories of political engagement and mused about how best to carry the momentum from Occupy in new directions. I asked about organizing at Whole Foods; a few of my co-workers smirked while others played dumb. A week later I was brought into the fold, and found people had been organizing for more than two years. I was feisty for action, but the others knew better; they were in it for the long haul.

Since workers came out after plotting in the shadows for nearly five years, store managers have reportedly attempted to kill them with kindness, while saying nothing of their demands. On the corporate side, Whole Foods Market announced a pay increase in its San Francisco stores effective Jan. 1, shortly after the Whole Foods Union went public.  The $1.25 increase in the starting wage, from $11.50 to $12.75, sits 50 cents above San Francisco increase in minimum wage that will take effect in May of 2015. Outside of that, both the store and corporate management have refused to publicly address the situation. Workers organizing at Whole Foods claim the announced wage increase four months ahead of schedule was likely in response to their demands.

In an attempt to put teeth to their demands workers held pickets at the Whole Foods Northern California Regional distribution center in Richmond, California. The picket fell short of stopping the flow of goods to the Bay Area stores it had envisioned, in the spirit of the Black Friday actions taken in 2013 by retail workers. Although the Teamsters did agree that their drivers would not cross the picket line. To that Ruan, the shipping company contracted by Whole Foods, hired temporary workers — scabs — to cross.

Organizing with the radical-syndicalist union, the Industrial Workers of the World, Whole Foods employees are shunning traditional unions that represent the majority of workers at Safeway, Alberson’s and other national grocers. In doing so, they have given up access to the deep pockets of United Grocery Workers and the like, but have the added agility to stealthily maneuver. The IWW is also the only union to have successfully created union shops at Starbucks.

“Organizing through the IWW gives us a lot of autonomy,” said Nick Theodosis, an organizer and beer and wine specialist at Whole Food SoMa. “All the decisions are made on the shop floor.”

It’s no secret that Whole Foods Market is hostile to unions. Its co-founder and co-CEO John Mackey has compared unions to herpes, and has insisted that his company is “beyond unions.” Whole Foods is the second-largest union-free retailer behind Wal-Mart, a company that does not hide its hostility to labor behind progressive rhetoric.

Nonetheless, Whole Foods Market has been listed on the Fortune 100 Best Companies to Work For 17 years in a row. For 2014 the green giant was listed at 44, just beating out Goldman Sachs. While it’s no surprise, Fortune does not consider organized labor as a significant factor in its metrics.

My first day working at Whole Foods, Mackey and co-CEO Walter Robb were walking around the store shaking hands with employees. Mackey — to his credit — has turned the ratio between executive and worker pay upside-down, earning a token salary of $1 a year; unfortunately those executive savings don’t seem to be passed down. He was goofy, yet sociable, and after some chitchat about backpacking he let it slip to me that on the trail he goes by the name Strider, a confession that brought an embarrassed look to Robb’s face. The trail name is likely a "Lord of the Rings" reference to the humbly disguised Aragorn.

Having worked on fishing boats for a few years prior, I ended up on the seafood team with a starting wage $2 an hour more than the minimum. To my dismay, I realized I was making significantly more than my friend from Mexico who helped me get the job. He had been a consistent worker at Whole Foods for more than five years and hadn’t seen anything more than meager raises.

At Whole Foods various departments are called teams -- for example, grocery, seafood, produce, and employees in those teams are called team members. Bosses and management? You won’t see those words; there are only team leaders. If these words had authenticity the “us versus them” dichotomy of normal labor discourse would be irrelevant. In fact, the company’s employee handbook specifically states “Us versus them thinking has no place in our company.” To counter this thinking Whole Foods states it attempts to cultivate an atmosphere of “happiness, joy and love,” and encourages “participation and involvement” in company policy.

While working at Whole Foods, the company actively sought out team member participation on how the company would restructure its benefits package. All team members attended a mandatory meeting on benefits. At the meeting the in-store human resources manager made it clear that Obamacare had resulted in higher health costs that had to be passed down to workers — ahem, team members. So the vote — non-binding, of course — was a vote on how workers would like their benefits cut.

During the meeting I pulled up a chart on the performance of Whole Foods’ stock on my iPhone and found it steadily climbing. The company’s stock price had increased more than 30 percent in the previous year and has continued to grow since — even though the company’s stock got pummeled earlier this year after it failed to meet growth expectations. I flashed the graph to an organizer sitting beside me who chuckled, then to the rest of the room, but there was no humor seen in it. They knew they were about to pay more so Whole Foods could tout its cost reductions to Wall Street.

This was, and still is, a clear sign of the times. At one of the country’s highest preforming companies, benefits continue to be eroded and wages stagnant at a time when the cost of living was steadily on the rise.

In fact, a public housing project a few blocks away from the SoMa store is known as the “Whole Foods Hotel,” in that more than a few team members live there. Even working full-time at one of the 100 best companies to work for, employees often rely on public housing and other forms of public assistance, shifting the burden to municipal coffers.

My time at Whole Foods was short. After three months of being a part-time team member while working full-time hours, with a schedule that made it very difficult to see my daughter regularly, I quit. As is often the case I didn’t have any grudges with the store management, I never felt abused or threatened. But I did suffer a very common indignity in the U.S. workforce: working 40 hours a week while still being chronically broke.

Many of the workers who now fear their jobs by standing up and making demands had been at Whole Foods for years. They support children and raise families with their unlivable wages. While retail is an industry with high turnover -- for example, myself -- it’s the livelihood of many. For a company that prides itself on promoting participation and involvement, it should respect and encourage the most direct form of participation a “team member” can engage in: organizing and demanding more from their highly profitable employer.