"You can't criticize Sorkin without becoming one of his characters": The infuriating futility of arguing with Aaron Sorkin

Again and again, Sorkin's response to criticism has boiled down to "if you were smarter, you'd see that I'm right" 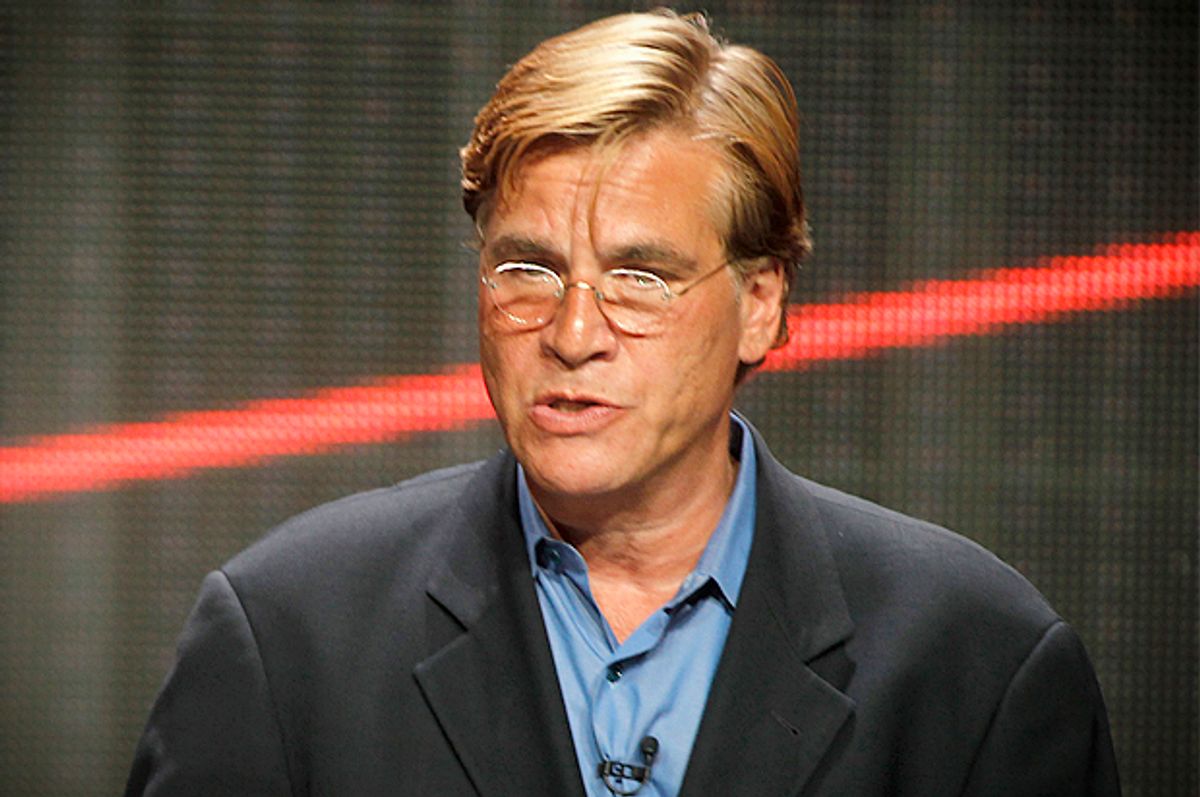 Despite its usual 20/20-hindsight setting, last night’s episode of Aaron Sorkin’s “The Newsroom” managed to be thoroughly of-the-minute as it dealt with a story revolving around a campus rape victim and her activism. Executive producer Don Keefer pre-interviews “Mary,” who runs a website for outing accused rapists, before she appears on “News Night” to face her attacker. In the process, Don indulges in a lot of heavy-handed Sorkinese and manages to come down on the wrong side of journalism and of justice, and throws in some typical Sorkin techno-fear-mongering about anonymous online activism to boot.

Even for a show as embattled as “The Newsroom” (last night’s episode was the penultimate in the show’s third and final season), critics hated it. The New Yorker’s Emily Nussbaum, in a comprehensive look at why this episode is so irritating even by “Newsroom” standards, takes Sorkin’s deranged idealism to task: “Don’s fighting for no coverage: he’s so identified with falsely accused men and so focused on his sorrowful, courtly discomfort that, mainly, he just wants the issue to go away. And Don is our hero!” Transforming, through her essay, into that which the Sorkin hate-watcher fears the most: a Sorkin character herself, as Nussbaum says, “fist-pounding, convinced you know best, talking way too fast, and craving a stiff drink.”

Time’s James Poniewozik goes further to indict Sorkin himself. “The Newsroom” is a sanctimonious show, but in this case, “when you make an episode as didactic, as righteous, as sanctimonious as this, you own what it preaches …. Like most such Newsroom parables, it gives you obvious clues—tone, cadence, music, camera angles, who gets the better speeches—to lead you to the path of virtuous and true thinking.”

Sorkin doesn’t exactly own the didacticism that has become a trademark of his writing — he told the Hollywood Reporter back when “The Newsroom” premiered that he’s “not trying to teach you anything, persuade you of anything; I'm not trying to make a difference” with this show — but hints that Sorkin might own what this episode preaches comes from no less a source than Newsroom writer Alena Smith, who wrote on Twitter last night:

So when I tried to argue, in the writers' room, that we maybe skip the storyline where a rape victim gets interrogated by a random man...

I ended up getting kicked out of the room and screamed at just like Hallie would have for a "bad tweet." — Alena Smith (@internetalena) December 8, 2014

I found the experience quite boring. I wanted to fight with Aaron about the NSA, not gender. I didn't like getting cast in his outdated role

That’s a pretty severe overreaction, unless the mere suggestion that Sorkin rethink one of his didactic lessons is seen as a challenge to his “path of virtuous and true thinking.”

Historically, Sorkin hasn’t responded well to criticism, to put it mildly. His mansplaining game is pretty strong, for starters. In his defense of the lack of decent portrayals of women in “The Social Network” on writer Ken Levine’s blog, Sorkin argues that he made the right storytelling choices because this just is how life is, let me explain it for you: “believe me, I get it. It's not hard to understand how bright women could be appalled by what they saw in the movie but you have to understand that that was the very specific world I was writing about. Women are both prizes and equal.”

But more often, a Sorkin defense can veer dangerously close to the morally certain arrogance of his most annoying characters. Often, Sorkin responds to criticism by suggesting that maybe you're just not paying close enough attention to what he's trying to say. In a discussion at the Tribeca Film Festival earlier this year, Sorkin decided to tell the audience that there’s been “a terrible misunderstanding” about the intent of “The Newsroom” and that the way critics see his show is fundamentally wrong: “I like writing romantically and idealistically. I try to balance that with just enough realism so that it feels like whatever romantic ideal is in there is somewhat attainable. It’s not a cartoon. It’s not animated … These are people who are trying to do the news well when market forces work against them.” To apply that thinking to last night's episode, what part of "bury the uncomfortable story" is part of this romantic ideal of the news business?

And who could forget his appearance at the 2012 Television Critics Association summer press tour, when he flat-out denied “The Newsroom” portrays its female characters as bumblers. "I completely respect that opinion, but I 100 percent disagree," Sorkin said. "I think the female characters on the show are not just talked about being good at their job, they are — you plainly see that they are good at their job." The subtext: Maybe you’re just not perceptive enough to see that?

Another example is this peevish letter to the San Jose Mercury-News earlier this year addressing a controversy surrounding his play “The Farnsworth Invention” that wags the finger immediately at what he presumes to be those who were inattentive or perhaps even just dumb, but certainly not ever misled by his writing. Sorkin lectures, “it’s not nuanced, it’s played out in front of us,” as if any nuance brought to the Sorkinverse, a place I once enjoyed and hope to again, doesn’t usually arrive and leave with the actors themselves. He continues for more than 400 words in a Jed Bartlet-worthy grand lecture about television history and how well he understands it, even if you don't.

Now, grand lecture mode has served Sorkin well throughout his career. I am convinced that Sorkin’s creation of President Josiah Bartlet stoked a specific need in his moderate-left audience for a simultaneously charming and serious-minded professorial father figure/leader of the free world who doesn’t hold back on the good-for-you finger-wagging lectures that led to that audience voting twice to elect Barack Obama, so you can’t say it’s always ineffective. But this episode of "The Newsroom" is going to factor into the show postmortems and well into the previews of his next project. His response will speak volumes about what he has and hasn't learned over the last three seasons of this show. Sorkin must, on some level, believe that if he just explains his intent often enough, people will learn to agree with him, but that's not how criticism works. Intent hardly matters when the execution is flawed, and in the case of last night's episode, even the intent looks bad from here.