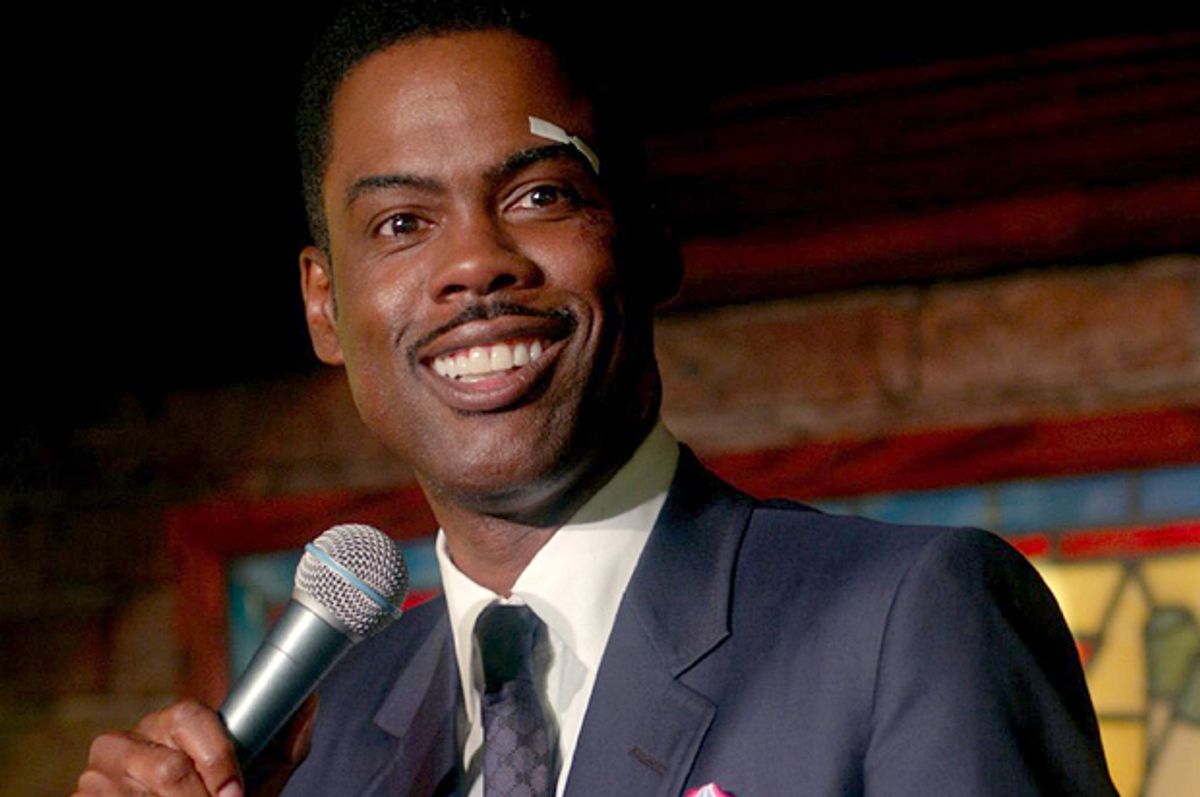 Chris Rock has been everywhere this week. There was the New York magazine cover story, the New Yorker profile, the Rolling Stone, Grantland and NPR interviews, the self-penned Hollywood Reporter think piece. But the film that spurred this media blitz might be Rock’s most thoughtful interrogation of his own public image of them all.

“Top Five” is about a comedian named Andre Allen (Rock) who is best known for a series of lowbrow, live-action comedies about a crime-fighting teddy named Hammy the Bear. In a quest to be taken seriously, Allen has made a film called “Uprize,” an overly earnest "12 Years a Slave" knockoff about the Haitian uprising that is tanking at the box office. Yet the only thing journalists — and there are many journalists in the film — want to talk about is when there’s going to be a new "Hammy" film, and his pending nuptials to Bravo reality star Erica (Gabrielle Union). As a semi-autobiographical dissection of comedic fame, it evokes films like Adam Sandler's “Funny People” and Woody Allen's "Stardust Memories," which Rock has cited as an inspiration.

It's fitting that Rock would release a movie about the tension between What It Means to Be Chris Rock and What Everyone Thinks It Means to Be Chris Rock on the heels of a week in which Rock dominated headlines. As we’ve seen from Chris Rock magazine mania, he is clearly concerned with the many ways the public misunderstands or misrepresents or projects onto him. Fittingly enough, the film’s framing device is an interview with a New York Times reporter named Chelsea (Rosario Dawson). An extended "Before Sunset"-esque walk-and-talk through the streets of New York City has the pair holding forth on a series of topics that will be familiar to those who have read his writing or seen his stand-up: Race, fame, hip-hop, Obama, Tyler Perry, the media, et al. Yet in the form of Chelsea, Rock is always challenging his own assertions, never satisfied to put out an idea without also presenting a counterargument. The reporter is a handy device for allowing Rock to access weighty topics within politics and culture while still seeming wryly self-aware.

In this sense, the film is not only autobiographical; it's a think piece about Chris Rock himself. Even idle flirt-conversations between Allen and Chelsea feel like an argument about his place in the world. “It’s never just a movie,” Allen says at one point in a debate about the relationship between art and politics, to which Chelsea responds: “Sometimes it’s just a movie." For a sense of the weight that Rock bears in the cultural imagination, look at the way New York magazine questioned him at length about Obama and partisan politics and gave his interview the sweeping deck "What's killing comedy. What's saving America." Rock wants to make a film that says Something, and yet he’s wary of being forced to say too much.

And it's this conflict that the film so neatly deconstructs. While it centers on Allen’s desire to be taken seriously and get away from the work he has been known for, it’s simultaneously about Rock’s attempt to be taken seriously as a director and auteur who makes nuanced films that don’t conform to expectation. Rock himself doesn’t necessarily want to be Steve McQueen (although he has said he would would like to be in a Steve McQueen film), and"Uprize” is clearly a joke, as the movie poster, with Rock goofily wielding a machete, makes clear off the bat. And unlike Eddie Murphy's, his career hasn't had a "Hammy" (even if he was the zebra in "Madagascar"). But Rock has talked a lot about the challenges black actors face in Hollywood -- for instance, about the expectation that they must be representative of a broader black community, or the notion that black actors should only make certain types of films. As he said in the THR piece on Hollywood as a "white industry": “No one's going to make a movie with a premise so little and artsy: a star putting out a movie and getting interviewed by a woman from The New York Times. I would have had to have three two-hour meetings explaining that black people also read The New York Times.” So he uses the journalist figure to subvert preconceptions about his work even while nodding to them.

Genre-wise, “Top Five” is hard to pin down. It’s a rom-com with lewd, gross-out slapstick, a realistic psychological journey and an over-the-top farce. In that sense, it’s sort of a mess. The tonal shifts in the film are drastic, and some of the scenes (like the one involving Cedric the Entertainer, a pillow fight and vast puddles of cum — I’ll leave it at that) feel like they’re plucked from a totally different film. Rock still hasn’t figured out exactly what he wants you to think of him, but the way the film reflects that uncertainty may be the most interesting thing about it.