Colbert's best Obama zingers: Ranking the jokes from his Obama interview, from tame to risqué

Despite "Colbert's" well-documented distaste for the president, he mostly kept things pretty softball 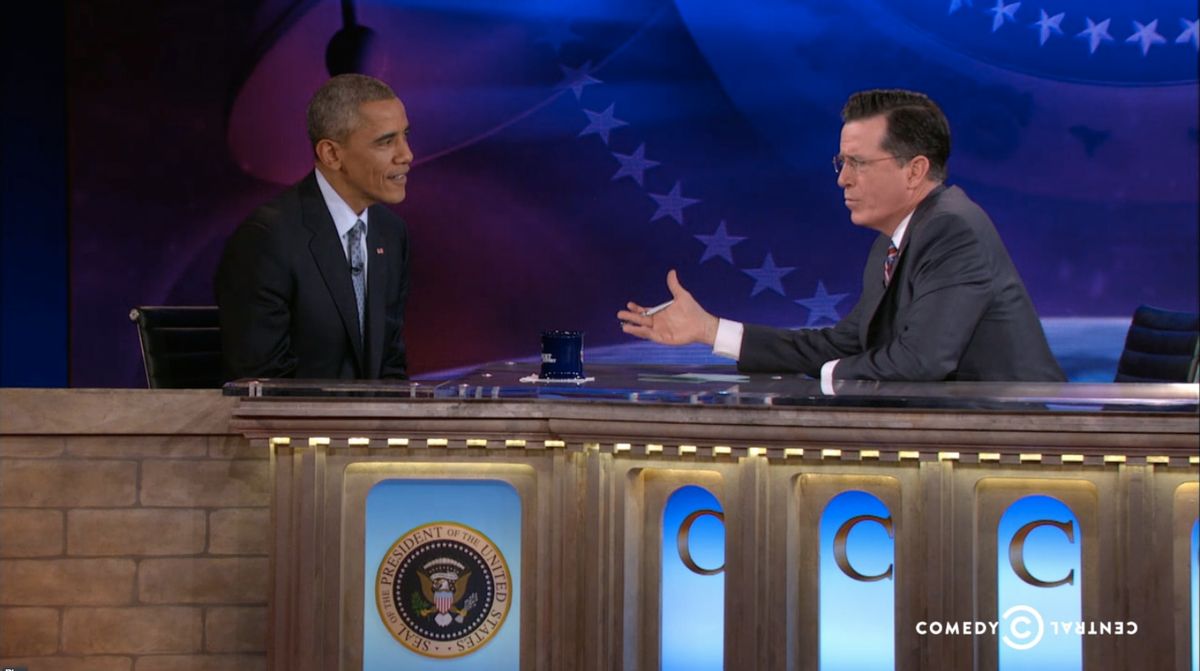 Stephen Colbert continued his victory lap last night with a visit from President Obama, in which the president hopped behind the desk to host “The Word," or, as he dubbed it, “The Decree."  Colbert kept things pretty tame during the interview portion, although he did manage to throw a few lighthearted potshots in there. Here are his best zingers, ranked from tamest to most risqué.

1. "Do you do normal things like leave your socks on the floor?"

Total softball, although we can't imagine Michelle is happy about Barack (literally) airing their dirty laundry in public.

2. “The jobs report came out for November, 321,000 new jobs added. Economy’s growing at a faster rate than it has for years. Why didn’t you fix the economy before the midterm elections? You know your job, but I would have done it before the elections so people were happy when they voted, and you win and then maybe you don’t have to come on the 'Colbert Report.'”

This one's basically a compliment veiled as an insult. Sure, he's jokingly telling the president how to do his job, but that's something Obama is most certainly used to by now.

3. “Are you still president after the midterms, because the Republicans are quite surprised you’re still doing anything at all. That shellacking didn’t rattle the presidential seal off your podium?”

OK, we’re ramping things up a bit here. It’s not a direct insult, but asking the president if he’s still president, rubbing his face in the midterm catastrophe and referencing his perceived political impotence has a little bit of bite.

4. Colbert's keystone pipeline suggestions: “We don’t build it down to Louisiana, we take it over the Canadian border, we build that big pipe all the way over the Mexican border, we leave the other end of it open with a sign on it that says mucho jobso, and the people over the border take the thing all the way up and they end up in Canada, and the Canadians are too polite to kick them out, and that’s your immigration policy.”

This one’s not directly about Obama, but there's a nice morsel of political incorrectness with the “mucho jobso.” It also gives Obama a chance to throw back a zinger of his own (“That sounds like a ridiculous idea, but that’s why you are where you are and I’m where I am.”)

5. “I’ll give it to you, you have employed a lot of people, mostly as secretary of defense.”

6. “I do have to say, a crowd of young people raising their hands to their charismatic leader is disturbing.”

Sure, it's a play on the patent ridiculousness of anyone comparing Obama to Hitler, but really, any Hitler reference is definitely on the risqué side.

7. "Well, let's talk about the jobs out there and how many of them will be taken by all the immigrants you're going to keep in this country. You realize you're an emperor now, it has been declared, you are Barackus Maximus the first ...

When did you decide to burn the Constitution and become emperor?"

Careful now, Stephen. This is the leader of the free world you're talking to here.