Playing on racial tensions in post-Katrina Louisiana, behold the low-life's plan to profit off Ferguson and Garner 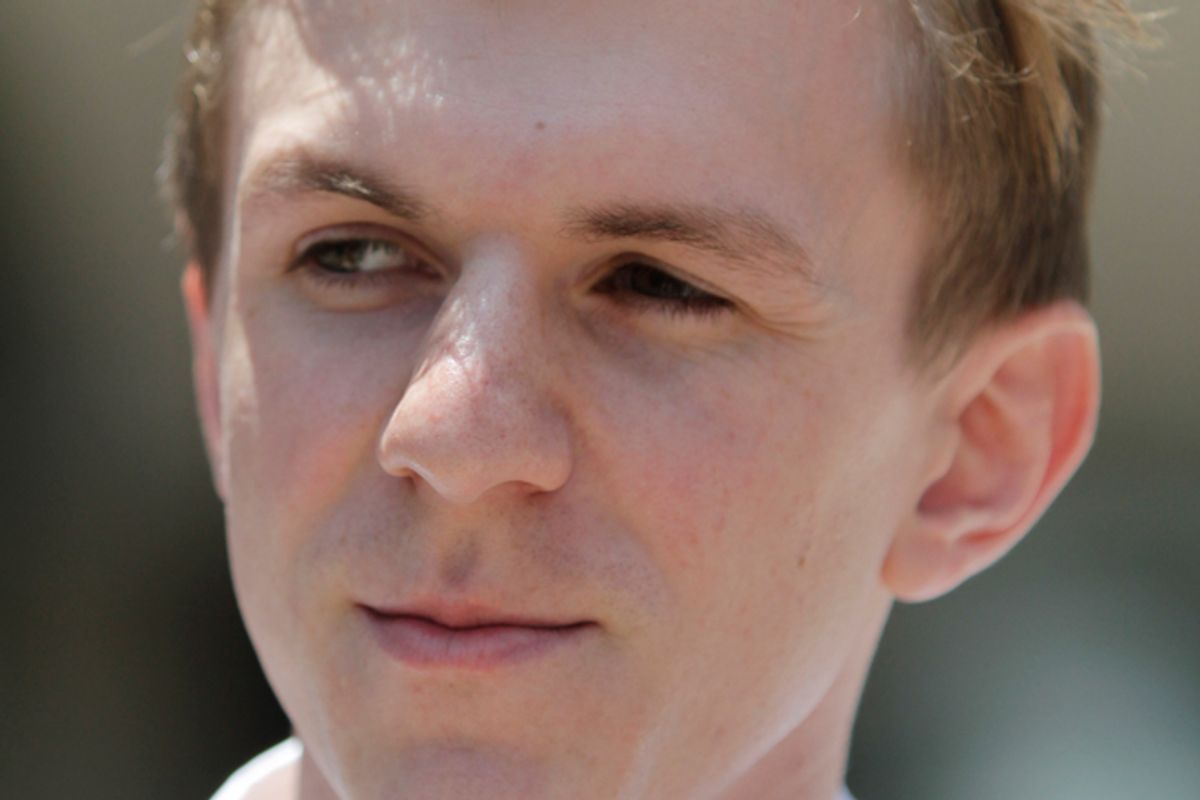 In thinking about the recent incidents of police killing unarmed black citizens and right-wing fulminating about looting and rioting, it's hard not to think back to perhaps the most horrifying example of how this sort of thing can play out in a real crisis: the aftermath of Hurricane Katrina.  Perhaps the best way to jog one's memory of what happened then was the famous burst of  unhinged hysteria from Wall Street Journal columnist Peggy Noonan:

As for the tragic piggism that is taking place on the streets of New Orleans, it is not unbelievable but it is unforgivable, and I hope the looters are shot.

She went on to discuss the difference between looters and those who were just taking what they needed to survive. As you may also recall, that distinction was often characterized in the press in a very particular way:

The media went completely crazy. It reported that the streets of New Orleans were total mayhem with "bands of rapists going block to block" and unconfirmed reports of sniper fire were offered up as fact without proof resulting in evacuations being delayed with people dying as a result. And people began to express their greatest fears:

BATON ROUGE, La. -- They locked down the entrance doors Thursday at the Baton Rouge hotel where I'm staying alongside hundreds of New Orleans residents driven from their homes by Hurricane Katrina. "Because of the riots," the hotel managers explained. Armed Gunmen from New Orleans were headed this way, they had heard. "It's the blacks," whispered one white woman in the elevator. "We always worried this would happen."

Gov. Kathleen Blanco announced she had sent in troops with orders to shoot to kill, and the second in charge of the police department reportedly told officers to fire at will on looters. The police followed instructions. One of the most notorious examples was the incident at the Danziger Bridge in which a 17-year-old black kid named James Brissette and a mentally disabled 40-year-old man named Ronald Madison were killed. Madison was shot in the back and four others were wounded.

None of the victims were armed. It turned out that the Bartholomew family was walking to the grocery story. Madison and his brother were simply walking across the bridge. It was later determined that some shots were fired from elsewhere to get the attention of rescuers. The police rolled onto the scene in a Budget rental truck and immediately opened fire while others chased down the fleeing victims and shot them with a shotgun. And then the police department conspired to cover it all up. The story unraveled and the cops involved in the shooting and the coverup were eventually indicted.

They never got to trial. A judge found that the prosecutors had engaged in misconduct by giving wrong instructions to the grand jury and divulging grand jury testimony to a witness, and the indictments were dismissed. But the Civil Rights Division of the Department of Justice had been simultaneously investigating. They got guilty pleas from a number of the police officers involved in the coverup and they tried and convicted the officers involved in the shooting of civil rights violations.

So, you had a situation where the locals in both the police department and the district attorney's office were corrupt and/or inept and basically allowed police to get away with murder. Unfortunately, the Department of Justice turned out to be little better. In 2013, the federal convictions were also overturned due to prosecutorial misconduct. The judge vacating the verdict said that the federal prosecutors had engaged in extensive, "highly unusual" and "truly bizarre actions," including leaks and posting on Internet forums urging witnesses to plead guilty.

We ended up in this case with the police lying and covering up the facts in their shooting of unarmed black citizens and prosecutors at both the local and the federal level apparently engaging in misconduct in trying the cases. There's a lesson in that somewhere but it isn't a good one. Even in a situation where it's quite clear that the cops went over the line and became trigger-happy criminals, it's nearly impossible for them to be held accountable. You have to wonder what it would take to convict them?

Sadly, I'm afraid we are about to see tragedy turned to farce before our eyes. Years after Katrina, a miscreant by the name of James O'Keefe tried to bug Sen. Mary Landrieu's offices in New Orleans. The offices were on federal property and he and three others were charged with malicious intent to damage the phone system. They pleaded guilty and O'Keefe got three years probation and did 100 hours of community service. What does this have to do with the Danziger Bridge incident, you ask? Well, you won't believe it.

Being the accomplished opportunist and con artist that he is, O'Keefe is taking advantage of the nation's current focus on police killing unarmed citizens and is down in Louisiana right now sending breathless missives to his followers complaining of his own victimization at the hands of the same federal prosecutors in the Danziger Bridge case:

As it turns out, Project Veritas Action investigators uncovered two weeks ago that these same prosecutors had been posting anonymous online commentary in my own case!

Today, I'll be filing several complaints, you can see them here, BUT, this isn't about me. Right now, our nation is being torn across racial lines due to the cases of Michael Brown in Ferguson, Missouri, and Eric Garner in Staten Island, New York.

A veteran attorney in the Civil Rights Division, Karla Dobinski, was yet ANOTHER attorney who had committed "grotesque" prosecutorial misconduct that led to convictions of law enforcement officers. Get this, Dobinski, was the leader of the "Taint Team" a component of the Civil Rights Division that was tasked polluting the public atmosphere on their active cases against cops.

She's now part of the team investigating Ferguson and New York. We know from their record, the Civil Rights Division has no credibility to investigate police misconduct.

That's why we'll be calling on Holder to appoint independent counsel to investigate these cases, along with the roles of the White House and Justice Department and their actions that have created racial tension, possibly leading to the riots and destruction that we've recently witnessed.

You'll have to forgive my long message, but it required an explanation, as this is just the tip of the iceberg.

I'm sure you noticed that O'Keefe blamed the White House and Attorney General Holder for creating the "racial tension, possibly leading to the riots and destruction that we've recently witnessed."

As you can see, poor O'Keefe and company are the real victims in all this. (Oh, and he needs money. Be sure to send him some.)

There is speculation (not independently verified) that police officer Darren Wilson may have been paid in the mid- to high six figures for his interview with ABC. And fundraising on his behalf apparently netted around half a million dollars as well. If O'Keefe wants to raise some real cash, I'm afraid these videos aren't going to be enough. He's going to have to shoot an unarmed black man.