Rape, justice and the Internet: What Rolling Stone and "The Newsroom" reveal about us 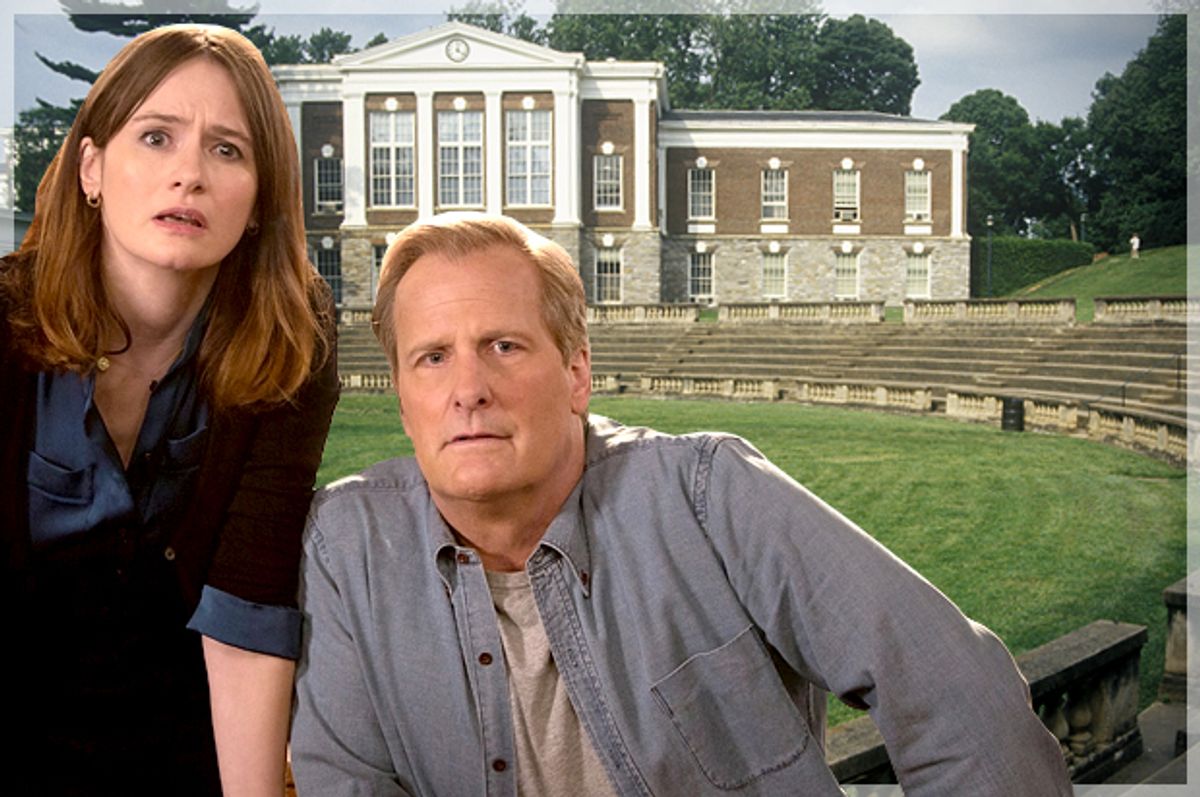 Emily Mortimer and Jeff Daniels in "The Newsroom"; the amphitheater at the University of Virginia (HBO/Melissa Moseley/American Spirit via Shutterstock/Photo montage by Salon)
--

Given that I haven’t intentionally watched "The Newsroom" since Season 1, last night would have seemed like the perfect time to keep on ignoring the show’s existence. After a weekend of following the cataclysmic online response to Rolling Stone’s retraction of its bombshell rape exposé, deliberately watching Aaron Sorkin’s media manqués Sorkining it up with a subplot about campus rape allegations seemed like time better spent doing something — anything — else.

And yet there I was. “Oh Shenandoah” has been recapped in excellent depth elsewhere, but here’s a nutshell of the plotline: Producer Don is sent to track down a Princeton student who has, in response to having her rape more or less ignored by the school’s administration, created a website where other survivors can meet and commiserate. Don’s terrible, money-grubbing boss wants Don to persuade the student, Mary, to come on TV and debate one of her rapists, but Don instead pleads with her to do the opposite and shut up about the whole thing because what if it’s not even true?

In less than an hour, the episode tacitly equated anonymous safe spaces where rape survivors can find community with sites that enable celebrity stalking; characterized female rape survivors as irrational and bloody-minded; had Don condescendingly tell Mary not to tell her story publicly; perpetuated the idea that women make rape accusations primarily to enact revenge, not because they’ve actually been raped; and had Don passionately decree that he trusts in the legal system literally right after he agreed with Mary that rape victims rarely see a court case, much less justice.

It seems somewhat ironic that another key plot point in the episode was that Twitter is evil manifest (spoiler alert: It kills!) since the writing in “Oh Shenandoah” sounded like nothing so much as a more highbrow, wordy version of the vitriol that has been churning through that particular social network since Friday, when Rolling Stone officially retracted Sabrina Rubin Erdely’s Nov. 19 story on the University of Virginia’s rape problem, whose central story was that of a woman, “Jackie,” who had been gang-raped at a fraternity party. The retraction, initially written by editor Will Dana with all the conviction of a damp Swiffer, was based mostly on the fact that Erdely didn’t corroborate the victim’s story against that of her rapists, and the fact-checking process let some other inconsistencies pass through. For an unsettlingly large number of Twitter users, “discrepancies in reporting” translated into “bitch made the whole thing up.” (The retraction was reworded and expanded over the weekend, and Jackie’s former UVA suite mate has made a statement to the campus paper that corroborates much of Jackie’s account.)

It’s not that anyone expected that "The Newsroom’s" take on the moral and ethical issues at the intersection of rape, justice and the Internet would be good. (It emphatically was not that.) It’s not that anyone thought that Sorkin’s notoriously dim view of women would somehow magically transform in an episode that tacitly foregrounded crimes against them. Indeed, one "Newsroom" writer, Alena Smith, tweeted her account of being kicked out of the writers room when she protested that particular story line. (Sorkin’s response to negative “Oh, Shenandoah” coverage have so far centered mostly on his disappointment that Smith “casually violated the most important rule of working in a writers room, which is confidentiality.”)

No, the problem is that what in Sorkin’s mind is no doubt an invigoratingly heady argument about morals and ethics and capital-m Meaning is the real life of many, many women and men, and they can’t afford to have crimes against them portrayed as a fun little game of what-if. Sure, false accusations exist, and the statistics vary, which matters little since most people cherry-pick the existing data that best adheres to their preexisting inclination to believe rape victims. But Don’s assertion that he’s morally obliged to believe a man accused of rape over his more credible accuser simply because there is no legal case in play (due to what he’s already acknowledged is a stacked deck against rape accusations) is, as both the New Yorker’s Emily Nussbaum and Time’s James Poniewozick point out in their recaps of the episode, a mind-bendingly bizarre adherence to rape apologism.

OK, so he’s certainly not Chuck C. Johnson, the execrable conservative “reporter” who on Sunday threatened “Jackie” openly. Johnson -- though I'm loath to make him stand in for anyone else, as he's a singular case -- is one of the many who have decided that Rolling Stone’s retraction means that Jackie was never the victim of a rape at all, and rather than taking the magazine or the reporter to task, has turned the full force of his rage on her. Oh, and don’t bother Googling to see what Johnson’s reveal of “everything about [Jackie’s] past” is: It’s her Pinterest board, which contains some pins about rape and survivorhood — the kinds of things someone might seek out if they were, you know, dealing with having been raped.

And he is clearly nothing like the men’s rights activists who evince a truly frightening lack of critical thinking, spraying Twitter with words like “hoax” and “lies” as they call for the heads of the “social-justice warriors” who continue to press for basic decency and understanding of why a rape victim’s story might not be consistent. (For people who are so worried about being slandered by false accusations, these fellows sure have a free-and-easy attitude toward reading comprehension.) These folks would likely tell you that they care about ethics, but the viciousness with which they go after “Jackie” personally — rather than after the magazine that badgered her to tell her story and then threw her under the bus when they bungled it so badly — tells the real story.

But all of these things — the highbrow TV dialogue, the feints toward ethics, the rabid glee with which Twitter users threaten to harass and victimize others — are part of the same rancid whole where the default setting is to not believe the people who say they were raped, to ask them to shut up on the off-chance that a man’s life or livelihood stands to bruise under suspicion. We’ve seen this play out a lot recently, from Woody Allen (“She’s a pawn in his fights with Mia Farrow”) to Jian Ghomeshi (“It was '50 Shades of Grey' stuff”) to Bill Cosby (“Those dozens of women lying to get money”) to Shia LeBeouf (“He’s a jerk and he probably liked it”). This is not the boldly contrarian stance of crusaders for the truth. It’s the bottom line of a culture that has always cast about for any and every reason to not believe people who say, “I was raped.”

In other words, Sorkin might want to wait to pat himself on the back for this hot take.