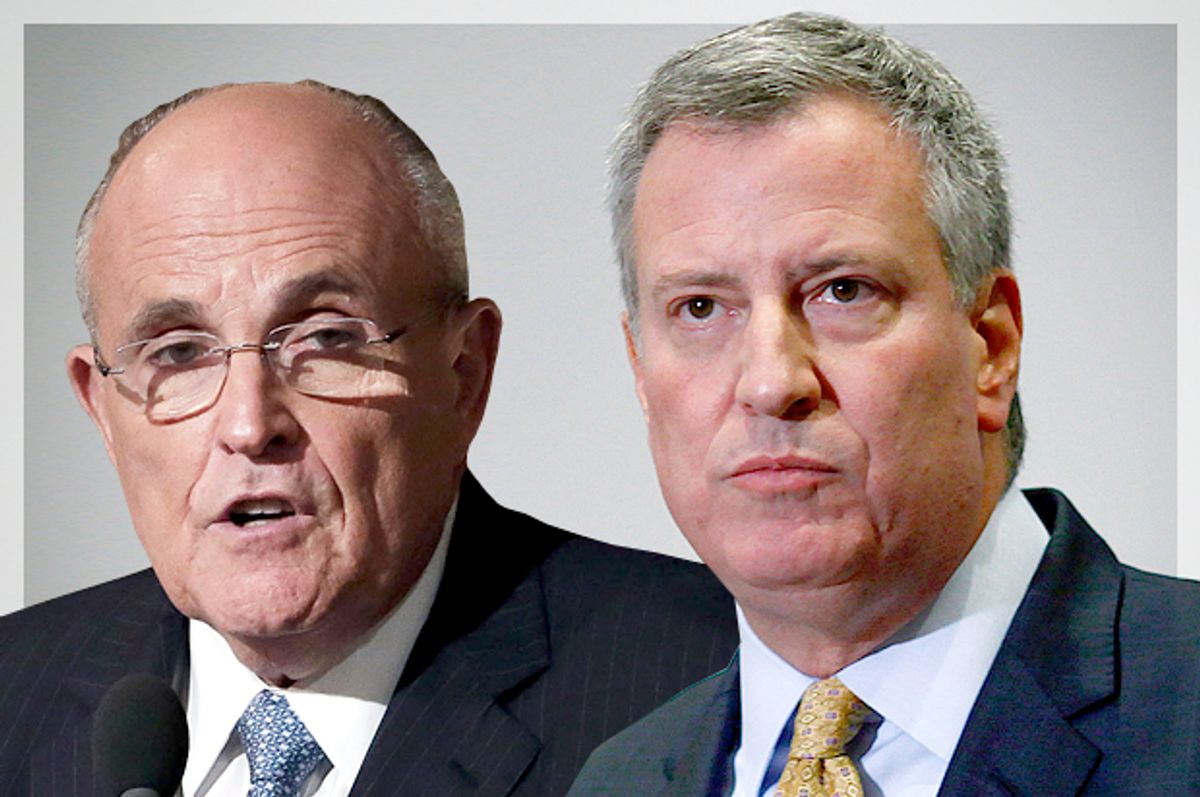 New York Mayor Bill de Blasio hasn’t succeeded in stopping police abuse in his city, but he’s managed to get under former Mayor Rudy Giuliani’s skin and provoke the prosecutor in chief to new heights of crazy. Giuliani had already emerged as the top apologist for police killings in Ferguson, Missouri, and Staten Island, New York, but de Blasio’s mild criticisms have driven the conservative to full culture warrior mode.

Sunday, on ABC’s “This Week,” de Blasio challenged Giuliani’s claim that "responsibility is on the black community" for reducing black crime, and thus police presence (and implicitly, police abuse) in their communities.  "I think he fundamentally misunderstands the reality,” the mayor said. “There is a problem here. There is a rift here that has to be overcome. You cannot look at the incident in Missouri; another incident in Cleveland, Ohio; and another incident in New York City all happening in the space of weeks and act like there's not a problem."

Venturing back into 1960s backlash politics for his rhetoric, Giuliani accused de Blasio and other “liberal guilty whites” of not telling the truth about black criminality.

Liberal guilty whites have to stop refusing to say the bigger part of the problem here is black crime and not police overreaction. A smaller part of the problem is police overreaction. It’s driven by the incredibly large rates of crime in the black community. The energy that Sharpton and everybody else is spending protesting against police would save a lot more black lives if it would start talking about black education, if it started talking about the family situation in the black neighborhoods.

Giuliani reminded me of William F. Buckley in 1965, running for mayor of New York and attacking the very notion of civilian police review. Buckley enjoyed sneering at liberals who blamed black crime rates on racism and poverty, as though such forces could “make Negro crime any less criminal.” Buckley also liked to say, ”I believe that young thugs are young thugs, irrespective of race, color or creed.”

But Giuliani also employed some modern culture war weapons in his screed, blaming not just “liberal guilty whites” but “the teachers union.” Huh? Let him explain:

Maybe all these left-wing politicians that want to blame police, maybe there’s some blame here that has to go to the teachers union, for refusing to have, for refusing to have schools where teachers are paid for performance, for fighting charter schools, for fighting vouchers, so we can drastically and dramatically improve the education situation. Maybe they should be talking about and holding rallies about the problem of black fathers taking care of the children they fathered.

Oh dear. In the end, Giuliani sounded not just angry but befuddled, insisting “all of this I don’t see as racial,” but then saying, in the very next sentence, “This is all a product of the terrible things that happened what someone called I think was the biggest sin in American history, was slavery.” So slavery wasn’t racial?

These points of view aren’t entirely new for Giuliani, who spent most of his time in office at odds with the black community and white liberals. I’ve thought his political career was over, but I could be wrong. Maybe he’s looking at the weak 2016 GOP presidential field and seeing an opening for an experienced champion of white backlash politics.