Colbert is not a pop culture prophet: Why we deified the "Colbert Show" host

He never set out to make us think more deeply about the world. His simple goal was to crack us up -- and that's OK 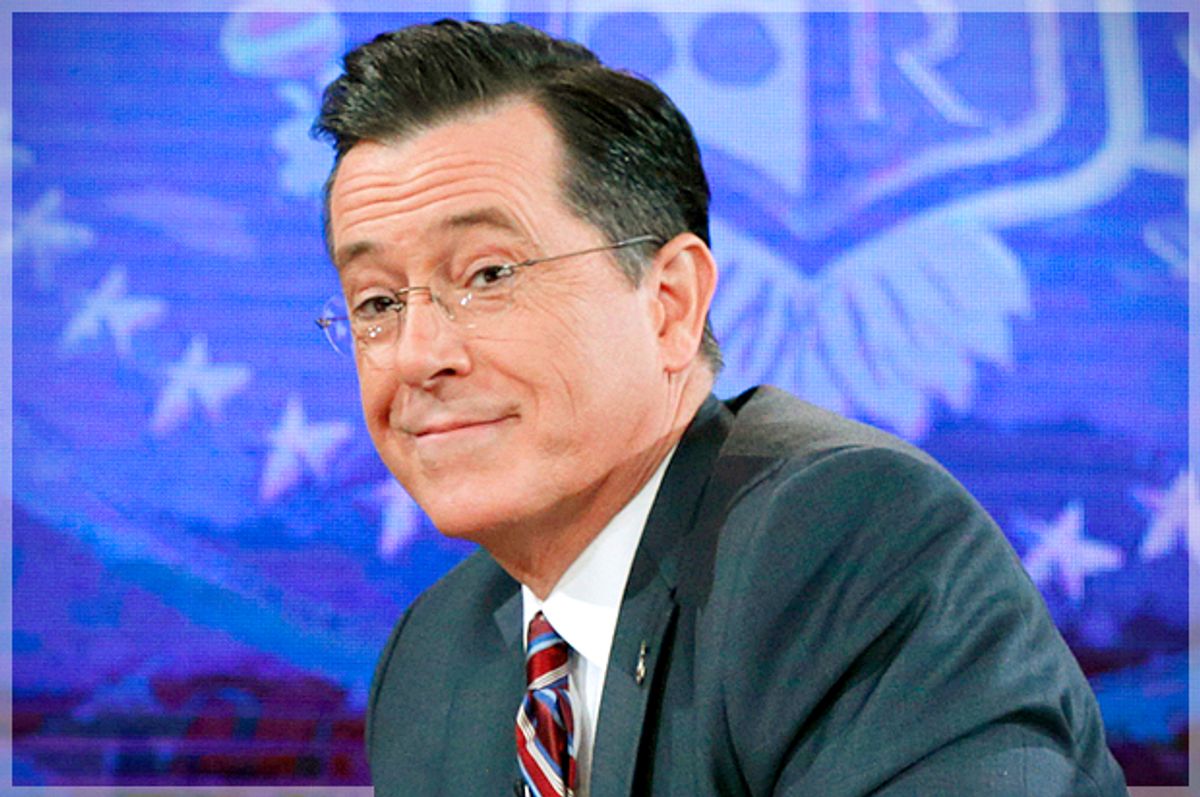 Now that “Stephen Colbert” is dropping the air quotes and heading off to the greener pastures of "The Late Show," we can expect the next two weeks to be full of superhyped cameos (Obama, anyone?), exuberant eulogies and forlorn think pieces about how much Colbert and his indefatigable persona meant to the body politic.

Most of these pieces will trade on the notion that Colbert (in the words of one college syllabus) “exposes hypocrisy with surgical precision, inviting us to think more deeply about serious issues and to improve our socio-political condition.”

There is no doubt that Colbert and his brilliant staff fulfills the first of these goals. But the ultimate claim here — that Colbert’s energetic shtick offers an antidote to our “socio-political condition” — is misguided.

A quick reminder of the midterm election results might be useful at this point. Voter turnout was the lowest in seven decades, barely a third of those registered bothered to show up at the polls. Turnout was especially dismal among younger, more liberal voters — "The Colbert Report’s" demographic, essentially. The result was a resounding victory for a party that has no coherent legislative agenda beyond perpetual obstructionism.

This is the exact moment at which all of Colbert’s fans would say that it's absurd to hold him responsible for this result, or anything, really, because he’s “just a comedian.”

“Stephen Colbert” is not, and never has been, an irony-fortified force for truth or justice or civic engagement. He’s not a pop culture prophet. He’s an extraordinarily talented song-and-dance man who made his nut by mocking the corruption of our political and media classes. His central goal was never to make us think more deeply, or take action. It was to crack us up.

If he was inviting us to anything it wasn’t a teach-in aimed at serious thought or activism, but a late-night party where the relentless moral perversions of politics and demagoguery were served up like appetizers, to be consumed amid gales of festive laughter.

This shouldn’t be read as an indictment of “Stephen Colbert” but of the cultural delusion that he was something more than an entertainer, and the co-joined belief — largely unconscious and therefore more powerful — that watching his program constituted constructive political action. (I told myself this for years and still believe it even though I know it’s rubbish.)

In his recent appreciation of Colbert, Hendrik Hertzberg, the New Yorker’s venerable political wag, referred to Colbert’s persona as displaying a “hint of lethality.”

But I can only think of one episode in which “Stephen Colbert” seemed truly dangerous, and I’d be willing to bet it’s the same one you have in mind: his turn as the designated roaster at the 2006 White House Correspondents’ Association Dinner.

Standing just a few feet from a visibly perturbed George W. Bush, Colbert called the sitting president a manipulative fool to his face. “I stand by this man,” he declared. “I stand by this man because he stands for things. Not only for things, he stands on things. Things like aircraft carriers and rubble and recently flooded city squares. And that sends a strong message, that no matter what happens to America, she will always rebound — with the most powerfully staged photo ops in the world.”

By that point in our history, Bush’s flaws and failures were so widely perceived that his approval rating stood at 32 percent.

More daring was Colbert’s takedown of the media who had served as cheerleaders for the president’s reckless policies, including his rush to war in Iraq and his shameful embrace of domestic surveillance and torture. “Over the past five years you people were so good,” he observed. “Over tax cuts, WMD intelligence, over the effects of global warming. We Americans didn’t want to know and you had the courtesy not to try to find out.”

The routine was riveting. But it wasn’t really that funny. It was tense. Colbert had used his persona as a Trojan horse to infiltrate the kingdom of Beltway power and to excoriate the ethical negligence of its rulers.

On his show, Colbert almost never created this kind of tension. He goofed on conservatives and media celebrities and embarrassed hick legislators. But it was understood — by the audience if not the guests — that Colbert was just kidding around. It was all show business!

So why not turn Henry Kissinger, the man who choreographed the assassination of a democratically elected leader in Chile, ignored genocides and plotted ghastly bombing campaigns, into a cuddly prop for a fun disco montage? Why not do a little cross-promotion with Bill O’Reilly? Why not use an American Army base in occupied Iraq as a venue for some patriotic comedy magic?

That’s what Colbert did during a 2009 visit. His interview with Gen. Ray Odierno, the commander of the Multi-National Forces in Iraq, included questions like, “What’s happening here that’s not being reported that you think people back home should know about?” (The general then gave Colbert a buzz cut, as a crowd of several hundred uniformed soldiers cheered.)

It may be that “Stephen Colbert” offering tongue-in-cheek testimony to a congressional committee brought attention to the plight of migrant workers. Or that his ballyhooed political action committee helped younger Americans understand the insane chicanery of campaign finance. But given the lack of political progress in either area, it seems just as likely that these stunts served to trivialize these issues, by framing them as comic fodder.

You can be sure that Colbert will tone down any talk of politics in his new capacity. But the distance between “Stephen Colbert” and Stephen Colbert was never so great as critics or fans liked to think.

Both are ambitious entertainers who ultimately serve the celebrity and sponsorship machine of our corporate media. Their job is to trend within our popular culture, not to shape our civic culture.

I do understand what Hertzberg means when he talks about “the consolation” of having Colbert’s character around. But what if that consolation — the therapeutic laughter he generated so effortlessly — was sapping a moral distress, and mollifying a rage, that we should be feeling?

I point all this out on the way to making a simple point, which will surely rank as critical heresy, especially as “Stephen Colbert” launches into his lavishly promoted victory lap: Maybe the American electorate is actually better off without him.

To be clear: None of what I’m saying here is a dig at Stephen Colbert, the comedian or person. He’s absolutely brilliant at what he does and he has a right to capitalize on that brilliance as he sees fit. He’ll make a lot of good television for CBS, and build a bigger audience and give that audience a lot of happiness. It just turns out this is more important to him than playing a role in our political fate.