In its annual retrospective slideshow, Facebook gets sentimental -- and glosses over the actual 2014 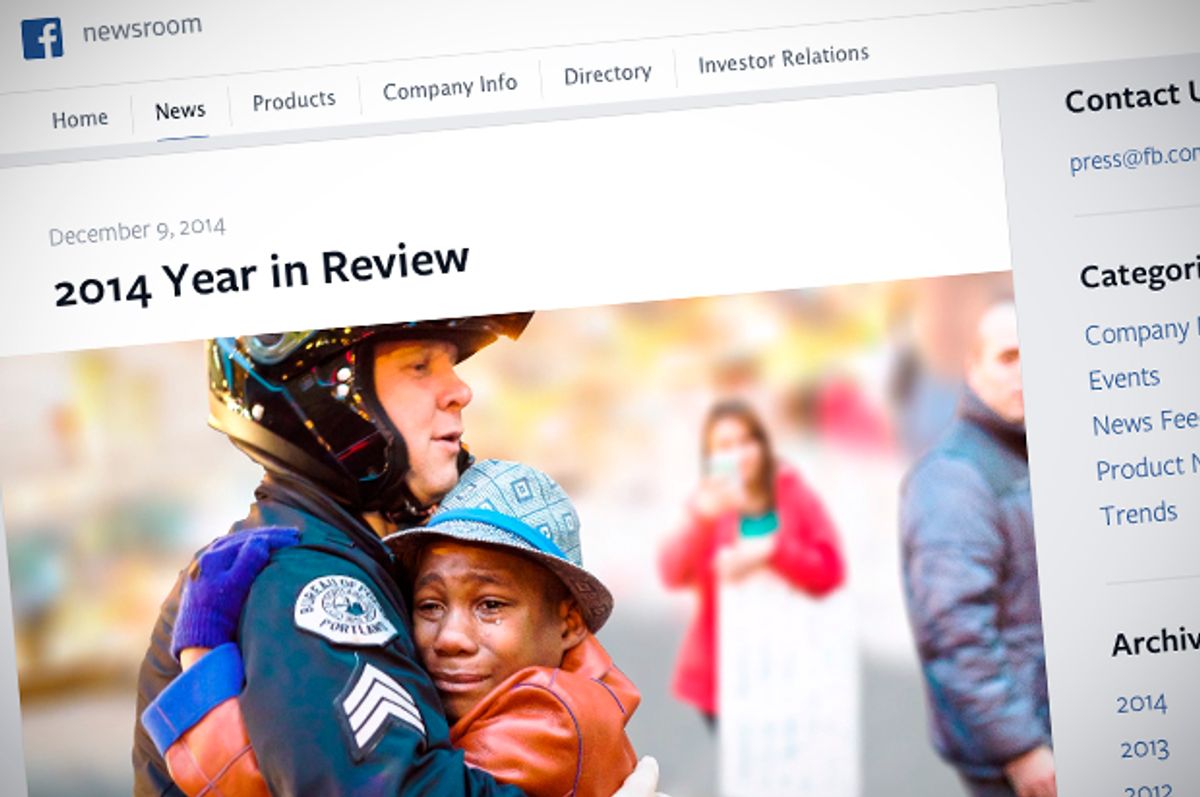 Facebook’s annual Year in Review is out, and like the much-reviled holiday newsletter or those open birthday letters to children that lifestyle bloggers used to love to write, the retrospective wraps the highlights of the year gone by in a gauzy glow, recapping the highlights without looking too deeply beneath the surface, and definitely editing out all of its own unflattering angles.

In other words, the Year in Review is what Facebook looks like without actual Facebook users — a sentimental celebrity outlet for dignified eulogies, a promotional outlet for sports photographers and the publications that employ them, and a safe space for pop lovers to tell Pharrell just how much they LIKE'd “Happy.” Also, remember how for a minute there people were dumping buckets of ice on their heads?

In the year-end review’s most political moments, 2014 was apparently the year for Facebook to remind the world that peace in Gaza is just right around the corner, please see #Jews&ArabsRefusetoBeEnemies. The Michael Brown grand jury decision in Ferguson was simply an opportunity to keep spreading the ubiquitous crying protest cop hug photo. Both of these simplistic portrayals of serious significant events play up the sentimental ideal that “we are all connected,” which Facebook uses to sign off from its year-in-review without reminding anyone of the unpleasant side effects of being so connected, like finding out just how racist a childhood friend has become, or picking a huge fight with your mother over politics right before a big family dinner, or ugly-crying over a particularly personal post about why #BlackLivesMatter, or losing your job because you posted a bunch of crazy racist rants about Muslims.

Facebook might be the place where comedians can publish touching messages about Robin Williams’ legacy, but it’s also the place where two people who have nothing in common but you as a “friend” can get into a nasty fight over whether or not suicide is selfish. If we’re celebrating the fact that Facebook users care enough about the Ebola epidemic to make it trend, we also have to recognize that Facebook’s 2014 hits included congressional staffer Elizabeth Lauten ripping into Sasha and Malia Obama for not “showing a little class” or dressing “like you deserve respect, not a spot at the bar” during the annual White House televised turkey pardoning ritual, and sucking it up and apologizing in a subsequent post before resigning in shame after half of Facebook shared photos of her not “showing a little class” in her youth herself.

In the retrospective, Facebook left out legitimate meta moments like members threatening to quit en masse over its infamous messenger app, the controversy over refusing to allow drag queens to use pseudonyms for their accounts, and Facebook’s role in NSA surveillance programs. Most lawyers would include a Supreme Court case in their year-end highlight reel — Facebook plays a key part in an open case over rap lyrics and the First Amendment. Also left out of its retrospective is Facebook’s role in the #GamerGate controversy, including the news that a video game journalist began sharing the rape threats she receives from teenage boys through their personal Facebook pages with their mothers. But really, you guys, Facebook doesn’t like to brag. It wouldn’t want to become the Todd Manly-Krauss — that’s Ploughshares’ fictional Writer You Want to Punch in the Face(book) — of social media.

That’s the Facebook we know, where one minute, you’re on a high from a righteous opinion romp you just know is going to land you viral fame, and in the next, you’re eating crow while your past comes back to haunt you in the worst moment possible. But Facebook didn’t do anything in this year-end review that millions of Facebook users don’t do ourselves every day: cherry-pick the images of ourselves that we want to show, crop and filter out all the blemishes and add an implied #blessed before sharing.