"He should have to stand trial": Rep. Keith Ellison sounds off on Eric Garner's killing and civil rights in America 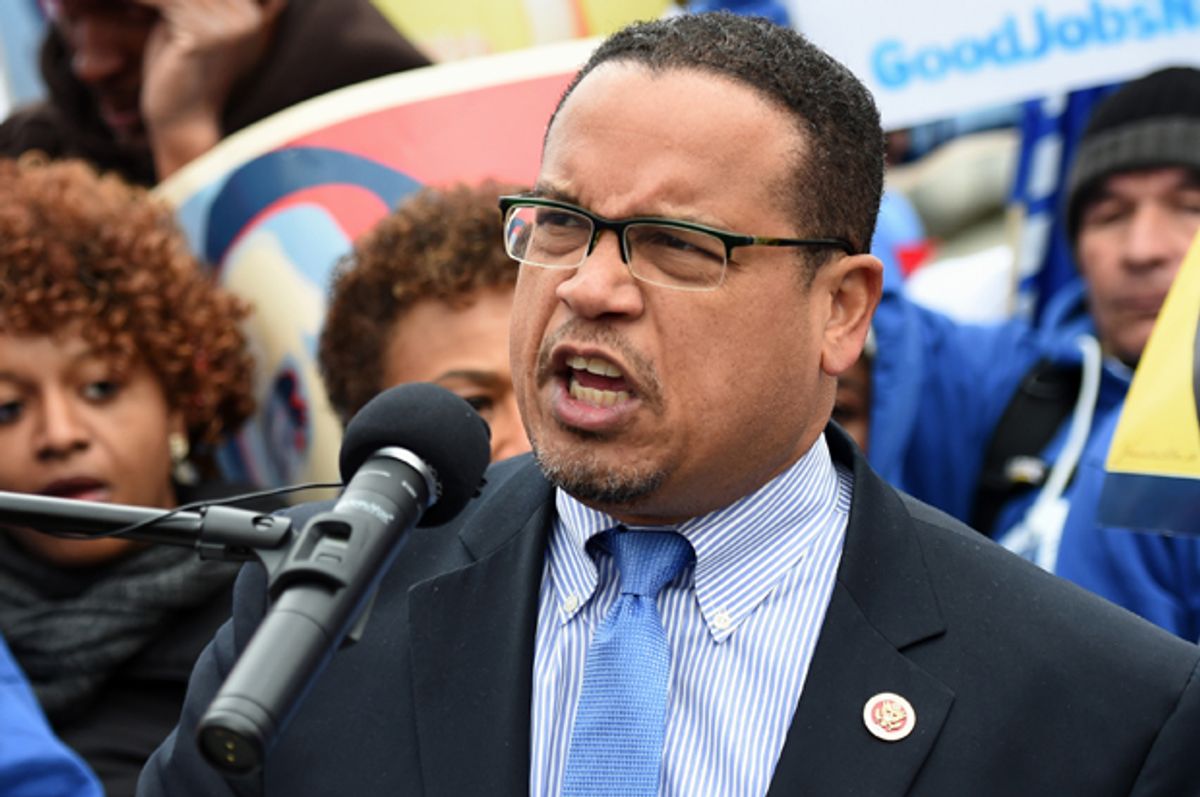 As the American people continue to debate about — and organize over — the lack of consequences for the police who killed Eric Garner and Michael Brown, some commentators (like yours truly) have urged national Democrats to be more directly and unapologetically supportive of their African-American supporters and the #blacklivesmatter movement in general. But while it's much too soon to tell whether Hillary Clinton or other similarly well-known Democrats will heed the call, it's clear that one Democratic congressman, Minnesota's Keith Ellison, is listening. "The fact is, people have to demand [a] sense of justice: people in the streets are going to make the system more responsive," he said recently on MSNBC.

Because we were interested in hearing more from the congressman about how to make "black lives matter" more than a slogan, Salon recently spoke with Ellison on the phone. We touched on peaceful protests, police reform and the massive-yet-unseen role economic inequality plays in communities like Staten Island or Ferguson. Our conversation is below and has been lightly edited for clarity and length.

We're seeing a lot of protests in the wake of Staten Island and Ferguson. The vast majority have been peaceful, but there have been some exceptions. Are you worried that if people in power don't respond to these protests, situations like the one in Berkeley could become more common?

There is a constellation of factors coming together that really should cause people to worry. We've had sustained and persistent income inequality, so many people are in jobs that they can't live on, and that's been a trend for 40 years, which has reached a pretty serious situation. And then into this environment we have these really bad interactions between police and community, which also have been going on for years and years but as the ranks of the poor and the working poor grow there are more occasions for police and community members to have unfortunate interactions.

So, yeah, I'm concerned about it too. Last week there were nationwide low-wage workers' strikes at the same time as these nationwide police brutality strikes and demonstrations. One can only guess when these movements will coalesce and make some general demands for a greater level of justice and a greater level of economic justice.

You don't agree with Sen. Paul and other Republicans, then, that the root cause of Eric Garner's death was taxes on cigarettes?

If Mr. Garner was earning a livable wage, would he be on a corner selling loosie cigarettes? The answer is clearly no. The bottom line is that wage stagnation — which is a result of laissez-faire economic policy — has been biting working people for the last 40 years. You can track it on a chart. As union density declined, wages stagnated. In 1957 — which was no banner year in America; we had racism, we had sexism, we had homophobia — one person could feed a family of four. Thirty-three percent of the American workforce was in a union and another 33 percent were paid as if they were. That set the standard for everybody.

Now we're down to the single digits in the private sector [with regard to unionization] and we have many more problems with folks insecure in their retirement, insecure with trying to acquire education. More people are relying on social supports like food stamps and housing and healthcare subsidies ... I would have to disagree that the problem has to do with the New York City cigarette tax. Why, then, was Mike Brown killed? Apparently tobacco was somewhere in the middle of that controversy, too? For that matter, what happened to Rodney King? We can name any number of examples; Tamir Rice, 12 years old. That kind of blows up the theory that this is about the New York City cigarette tax.

I'm sure you saw that the president recently met and spoke privately with a group of young anti-racist activists. He told them to be patient and to embrace incrementalism. Do you think an incrementalist approach is the way to go? Or do activists need to push for more dramatic changes?

I don't think those two points of view [incrementalism vs. a more ambitious approach] are necessarily in conflict. The point is, when you have a loved one killed, having a politician tell you to go slow and be patient is just not satisfying. You want immediate action and you want it now. I think people are right to demand that particularly officer Pantaleo face justice for what he did. I don't believe he was trying to murder Eric Garner, but I certainly believe that he used a chokehold — which he was trained not to use and which was against department policy — and that the use of that led directly to the death of a person. Which is why it was banned.

So then why in the world would he not have to face any sanctions in the criminal justice system? I think at the very least he should have to stand trial for, I don't know, reckless endangerment, negligent homicide, involuntary manslaughter ... there could be a range of things that he should have to answer for. What the jury does we would find out at the trial, but this new bill says that he doesn't even have to answer at all in the criminal justice system. And there we have a citizen lying dead on the street, for seemingly nothing.

There you go. So I definitely feel that people who don't find the go-slow, systemic argument emotionally satisfying because of the horror of what has happened and the fact that there's all these cases — it's not just Eric Garner, it's Tamir Rice, it's this guy who was this cosplayer out in Utah who was shot. What was that guy doing? It's Rodney King! Even the Kerner Commission report, in 1967, which studied the riots, pointed at police issues as one of the sparks that caused it all. This is a long-term, systemic problem.

Do you think putting body cameras on police, one of the more popular ideas being raised in response to the Brown and Garner killings, is an adequate response? Or is it too gradual?

I'm for body cameras, I'm for cameras in every car. It would reduce the he-said, she-said nature of these things. But look at it: Eric Garner's killing was captured on video and it didn't seem to matter. Oh, by the way, I seem to recall the 58 blows to Rodney King's body were caught on camera and the jury acquitted in that case. So cameras alone are no panacea, but I think they would help, I think they would be beneficial. What we've really got to do is retrain and reorient the police to protect everybody as opposed to protecting some people from some other people. Low-income African-Americans are certainly policed a lot, but how well are they protected? We also know that a lot of people face a lot of crime in those communities.

How long are we, the richest nation in the world, just going to sit by and allow pockets of poverty to exist? We're disinvesting in public housing, we won't raise the minimum wage, we're diminishing collective bargaining; we're literally flatlining or even cutting Head Start, Meals on Wheels, the SNAP program. We don't want to give income support to people who need it. We certainly aren't strengthening the right to collective bargaining. We're doing more trade deals, more offshore, low-end, labor-oriented jobs. At the end of the day, we're not investing in infrastructure, which would put people to work and tighten the job market and help wages to rise.

We've got to make some decisions about who we want to be as a nation and I think that's the key. At the end of the day, who are the cops? Well, they're working-class people. Many of them who are in these ugly incidents are relatively young guys and they're sent in here to police the wreckage or the castaways or the margins of this economy that doesn't include everybody.

After the Democrats' poor showing in the 2014 elections, there was a lot of talk about how the party needs to find an identity. Is a melding of the fast-food workers' push to reduce inequality alongside the #blacklivesmatter protesters' push to reform the criminal justice system — is that the identity the Democrats have been looking for? And if so, do you feel like the party's leaders understand that and are listening?

I think our leadership does get it. I think the essential problem is not that Democratic leadership doesn't get it, but that the Republicans are in complete solidarity with their core constituency. When they go to the country club and they promise to cut taxes and regulation, they mean it and they do it and they even shut the government down over it. Whereas, when we go, we're trying to make sure Wall Street is happy and we're trying to do something for workers. We're not really saying, "We are standing up for the little guy." We're not really standing with the small-business guy against the big-business guy; we're not really standing with renewable energy against the fossil fuel industry. We're trying to have it all.

It's not that we don't know, it's just that we are conflicted and ambivalent, and I think we need to decide that, yeah, America is now and is probably always going to be a country where markets will thrive and grow, but will we at least make a full-throated defense of the role of the public sector and the importance of making sure there's an economic ladder that everybody can climb? We get caught in the middle of these things, where on one hand we've got some Democrats who wanted to dismantle Dodd-Frank a few years after it was passed ... that shouldn't be where we are. We should be very adamant about raising the minimum wage. I believe we should have more members of Congress standing with workers on the street, visibly, talking into a bullhorn. More, not less, so that people will really feel that you're on their side. Actually, I think if we were to do that the overall economy would improve. Certainly, employers like Costco wouldn't mind because they pay decent, livable wages.

Let's just look at Ferguson for a moment. Let's recognize the fact that the unemployment rate in the city of Ferguson rose from about 7 percent in 2000 to over 13 percent in 2010. For the people who were employed, their earnings fell by a third. The number of people who needed housing [assistance] leaped. What happens in that situation, where you have more people standing on the street because they're not working, you have more people who just aren't making what they were? Into that void, something's going to happen. What has happened is that the police are going to make sure people stay in line. This is the problem. If we just get body cameras, and even if we do stuff with the justice system; even if you prosecute Darren Wilson, what are you going to do about the fact that these people are being abandoned economically? If you don't do anything about it you're going to have another Darren Wilson situation.

Poverty jacked up in Ferguson between 2000 and 2010; the poor population literally doubled. The spark of these demonstrations might have been the death of 18-year-old Mike Brown but the kindling for the spark and the thing that keeps the fire blazing is the systemic economic abandonment of this community and communities like it all over this country.