The Ebola Fighters' battle is far from over

Time honors health workers as its Person of the Year, but leaves out the fact that they're still fighting 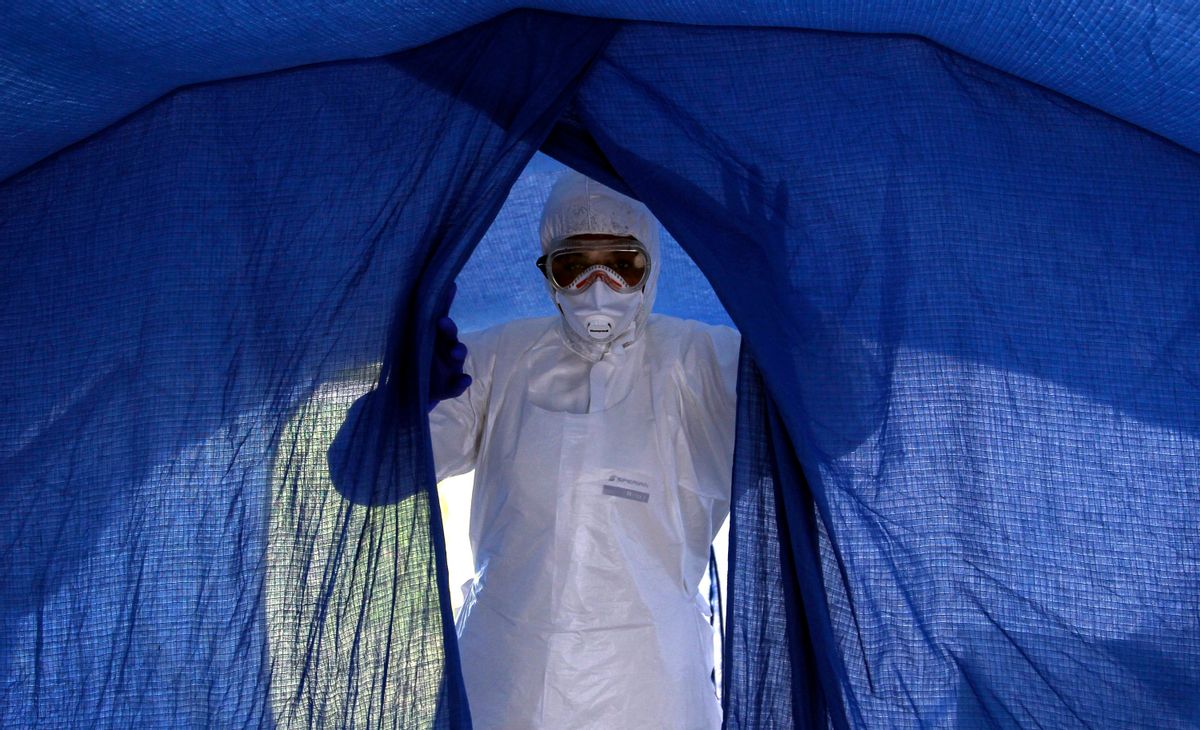 In this file photo taken on Sept. 24, 2014, nurse Dalila Martinez, trainer of the Cuban medical team to travel to Sierra Leone, enters a tent during a practice drill at a training camp, in Havana, Cuba. (AP Photo/Ladyrene Perez, Cubadebate, File)
--

Time's Person of the Year for 2014 is the Ebola Fighters. Aside from the awkwardness of having your person be people, the choice couldn't be more appropriate: the magazine pays tribute to the incredibly brave men and women who risk their own lives by charging into the heart of an epidemic, who stepped in where the World Health Organization and governments failed and are preventing an already horrendous outbreak from becoming even worse. And it takes a pointed dig at the United States' irrational, fear-driven response once Ebola landed on our shores, vindicating nurse Kaci Hickox, whose own sacrifice was undermined by a certain "combustible governor's" attempt to force her into a medically unnecessary quarantine.

It's a fine tribute to the people who fought an incredibly formidable enemy. Are fighting. Reading through Nancy Gibbs' story, you'd be forgiven for thinking that their battle's already been won: she asks what "drove" the healthcare workers (not what's driving them); describes tiny children that "watched" their families die, (even though many are still watching); and declares that the "next challenge" will be to determine what to do with what we've learned.

That's certainly true, but we shouldn't forget that the current challenge is far from over. Even though the United States' attention has largely drifted away to other matters, the epidemic rages on in West Africa, where according to WHO it's "running ahead" of efforts to contain it. As of December 6, the CDC's counted 17,834 total cases; while the increase in cases is slowing in Guinea and beginning to decline in Liberia, the last week of November saw 537 new cases in Sierra Leone -- the highest weekly count anywhere since the outbreak began.

In affected countries, according to WHO, 622 health workers have become infected with Ebola, and 346 have died from it. To be sure, more sacrifices are going to be made. According to a new report, health care workers in Sierra Leone are one hundred times more likely than the general public to contract Ebola.

As WHO director general Margaret Chan said just last night, "We need to guard against complacency." The Ebola epidemic isn't going to be contained to 2014 -- the U.N. says the earliest we can hope to get there is the middle of next year, and that's only if the world considerably steps up its aid efforts. In addition to celebrating the people who are fighting the outbreak, this would have been a good time for Time to remind us that they need our continued support.