The "manservants" craze: Why women's sexual fantasies are so embarrassing

A startup is pimping out hot guys to give compliments and open doors. Is this really what female desire looks like? 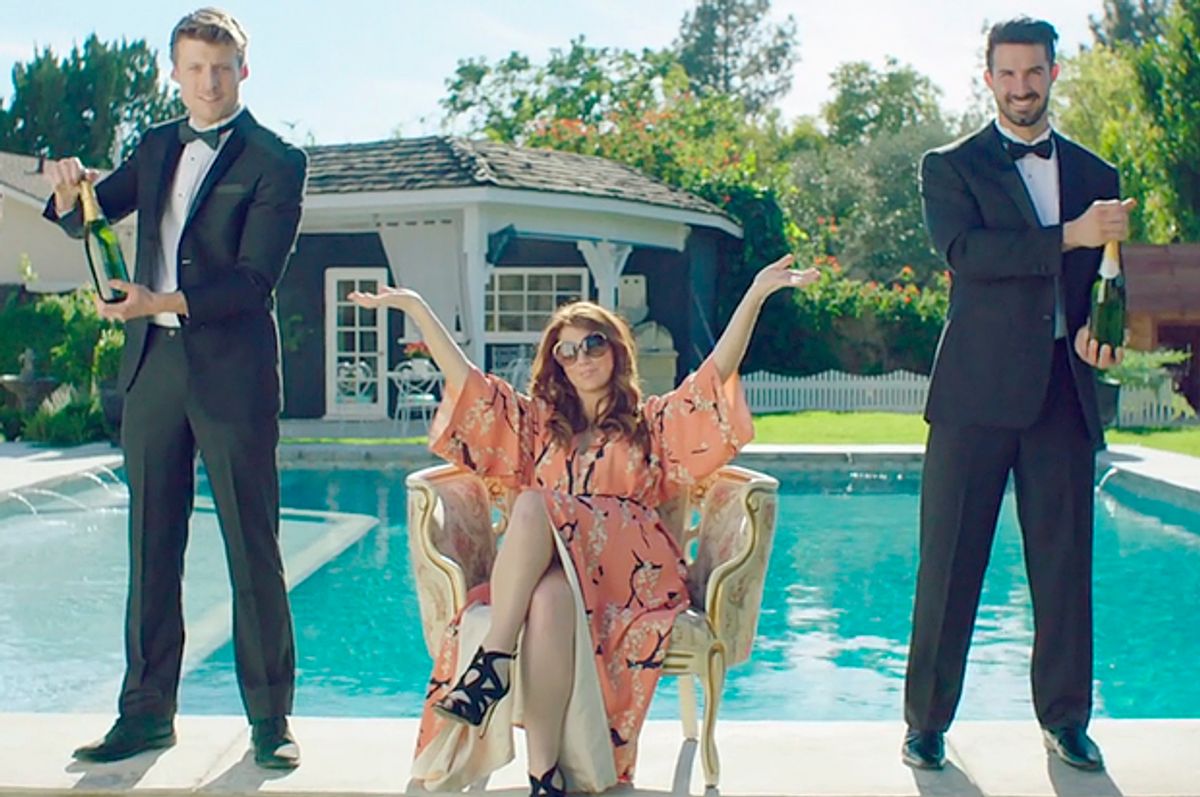 A San Francisco start-up is letting women rent out attractive "manservants" who give hand massages, dish out compliments and open doors at a rate of $125 an hour. The ManServants website explains the service like so: "It’s not a stripper who gets naked and rubs his greasy body all over you. It's a ManServant: a gentleman who treats you like a queen. Book one for a bachelorette party or any gathering to be your personal photographer, bartender, bodyguard, and butler all in one." These remarkably boring-looking, model-perfect men are willing to remove their shirts while providing the aforementioned attentions, but customers are required to agree to not engage in any "demeaning" behavior toward the manservants. No catcalling or showering with dollar bills.

As a woman who delights in seeing the tables turned on men, I should be thrilled at the idea -- but I'm not. In fact, it makes me kind of mad -- and I'm not alone. Writers Julieanne Smolinski and Ann Friedman have both rented a gent and written about the ensuing awkwardness, and both expressed an unease with ManServants’ interpretation of what women want. As Smolinski put it, the company is “operating under the premise that while men would like to pay a woman to take her clothes off at a party, women would like to pay a man to come to a party and be nice to them.” Friedman said, “I can’t decide if this is a triumph of feminism or the most retrograde thing I’ve ever heard.”

I wrote to a handful of friends to ask them to come up with a dream scenario of men catering to female fantasy in an economic exchange. How might we create the equivalent of what the strip club bachelor party is for men, only for straight women? How could we luxuriate in objectifying men amid female bonding? I was looking for something less demure than hand massages from a tuxedoed gent, but more refined than overly tanned guys in electric pink G-strings. There had to be some middle ground between banana hammocks and Sexy Jeeves, right?

This question coming from someone who was so incapable of answering it that she had her bachelorette party at an animal shelter.

My friend Susan was one of the first to respond. “Oh yes, I've already heard of this service,” she wrote, “and am VERY interested in it!” She went on to write about her recent trip with six girlfriends to Hawaii and how they were all wishing for a “handsome cabana boy.” “That's basically my fantasy, lying on the beach or by/in a pool with a half dressed man bringing me refreshing cocktails and snacks,” she said. “Preferably he would go in the water as well, because wet!” Because wet.

Katherine was similarly enthusiastic about the ManServants idea. In fact, she had dreamed up an idea for a similar service years ago: “It was basically a handyman service with cute guys who would do all the things an amazing boyfriend might -- in addition to housework and home repair, they'd bring you soup when you were sick.” Apparently, she is on to something, because the rest of the responses I got similarly eroticized housework. Lest you think that my female friends lack sexual drive or creativity, this group includes women who watch porn, read filthy fan fiction and enjoy the hell out of sex -- whether it's kinky or vanilla, one-night stands or the monogamous partnered kind.

Here’s Meagan: “I regularly pay TaskRabbits to clean my house, snake the shower drain and fix things for me around the house. Would I pay slightly more if they were hot? Probably.”

And Jill: “I'd be down with shirtless plumbing, window-washing, hell -- vacuuming!?”

And Margaret, too: “As sexist as it may be, from either perspective, I would rather have a man do more ‘typical’ man things,” she said. For example, a hot guy “landscaping, doing handyman work, putting in my new AC unit or setting up my TV I just got from Best Buy." Or, she added, “fixing little things around my house, hanging a picture using a drill.”

I have the urge here to quip that I need to buy my female friends some power tools. But here’s the thing: I don’t own a single power tool and, yeah, those scenarios all sound incredibly hot to me too. Men at work, doing man things. Ugh, man things. I cringe at the phrase, because it is so retro, so limiting, so fucking patriarchal. But, what can you do, we’re all products of our culture.

You see that there? That’s the line I employ whenever I get uncomfortable with the cliché of my and other women’s desires, and how they conflict with my feminist beliefs. Sexual fantasies often refuse to play politics, except to completely contradict our most deeply defended beliefs. But sometimes they do negotiate with culture. When I wrote in the past about men stripping for female audiences, and how it's so often treated as a goofy and hilarious spectacle, I talked about how objectification is inherently feminizing. Objectifying men while they do manly things is one way to solve that problem.

These visions of shirtless, sweaty men fixing things around the house are certainly more erotic than ManServants’ idea of what women want. Still, I find myself wishing that they were more equivalent to male fantasies. The truth is, I am perpetually disappointed by female sexuality -- or female sexuality as it’s manifested in our society -- and that’s largely in contrast to male sexuality (or male sexuality, say it with me now, as it’s manifested in our society). Popular wisdom is that men are visual creatures and women are all about context and feelings. Regardless of whether that is true -- and the science on it paints a far more complex picture -- the idea itself haunts me.

That isn't because I think that the stereotypically male approach of tucking dollars in G-strings is a truer expression of sexuality, but because it creates an imbalance. Physical objectification is a certain kind of power, and it’s one I’ve never wanted to belong solely, or even mostly, to men. Similarly, there was a time when I would try to keep pace with guys at the bar -- not because I thought pounding shots was a good way to stay hydrated but because I wanted to keep up and, ideally, beat them -- on terms I hadn’t chosen.

But how, exactly, do you choose your own terms in this hot mess of nature versus nurture, and nature reacting to nurture? I'm still figuring that out.