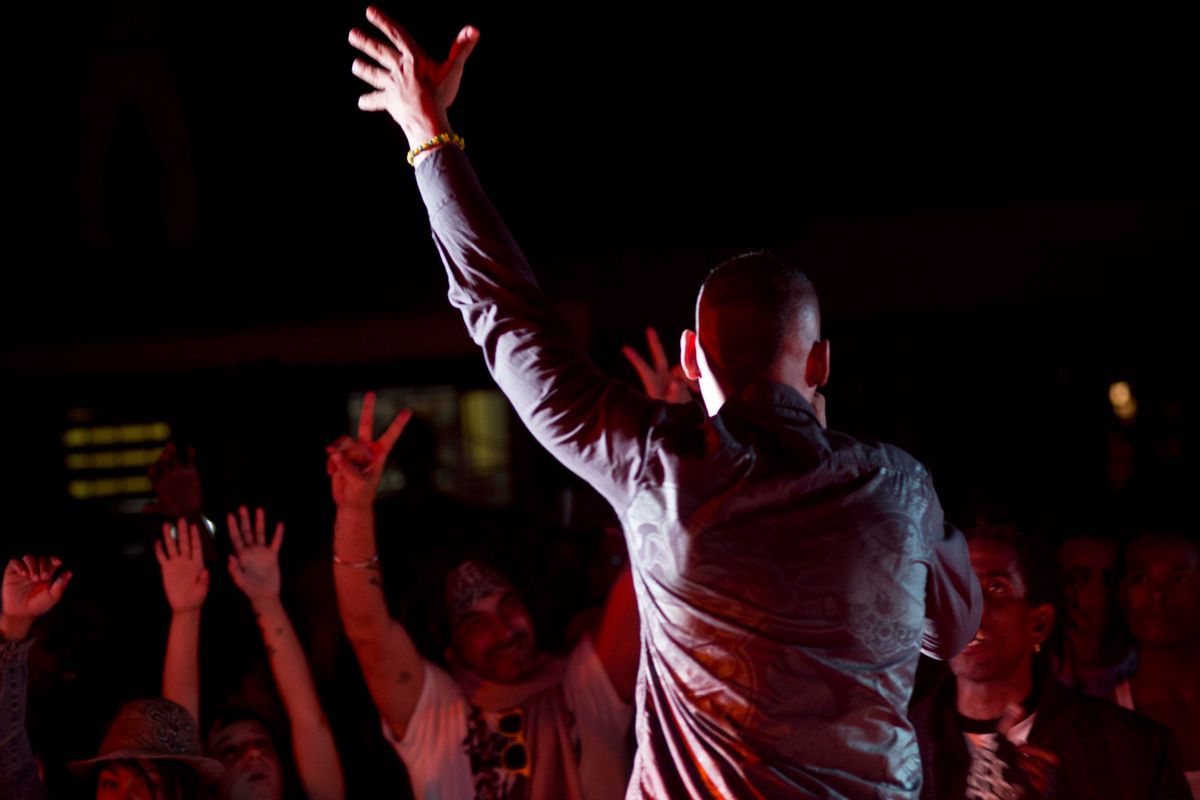 In this Nov. 30, 2014, photo, Cuban fans sing during a hip-hop concert in Havana. Documents obtained by The Associated Press show that a U.S. agency infiltrated Cuba's hip-hop scene, recruiting unwitting rappers to spark a youth movement against the government. (AP Photo/Ramon Espinosa) (AP)
--

HAVANA (AP) — A U.S. agency's secret infiltration of Cuba's underground hip-hop scene to spark a youth movement against the government was "reckless" and "stupid," Sen. Patrick Leahy said Thursday after The Associated Press revealed the operation.

On at least six occasions, Cuban authorities detained or interrogated people involved in the program; they also confiscated computer hardware that in some cases contained information that jeopardized Cubans who likely had no idea they were caught up in a clandestine U.S. operation.

"The conduct described suggests an alarming lack of concern for the safety of the Cubans involved, and anyone who knows Cuba could predict it would fail," said Leahy, a Vermont Democrat who is chairman of the State Department and Foreign Operations Appropriations Subcommittee. "USAID never informed Congress about this and should never have been associated with anything so incompetent and reckless. It's just plain stupid."

The plan called for contractors to recruit scores of Cuban musicians for projects disguised as cultural initiatives but really aimed at stoking a movement of fans to challenge the government. They filmed TV shows and set up a social network to connect some 200 musicians and artists on the island, who would be encouraged to start a social movement. Artists were flown to Europe ostensibly for concerts and video workshops but the real aim was to groom them as activists.

The hip-hop operation was conceived by one of USAID's largest contractors, Creative Associates International, using a team of Serbian music promoters. The Washington-based contractor also led other efforts aimed at undermining Cuba's communist government, including a secret Cuban Twitter text messaging service and an operation that sent in young inexperienced Latin American "tourists" to recruit a new generation of activists.

The collection of USAID missions, which were all undertaken over the same period and cost millions, failed.

"These actions have gone from boneheaded to a downright irresponsible use of U.S. taxpayer money," Republican Sen. Jeff Flake, a longtime critic of the USAID's programs in Cuba, said in a statement.

To keep their Cuban targets in the dark, Creative Associates contractors used a front company in Panama with directors in Tortola in the British Virgin Islands — and a lawyer in Liechtenstein to head it. Contractors used codenames, encrypted email and cover stories to fool Cuban authorities.

A mountain of evidence is revealed in hundreds of pages of contractors' documents obtained by the AP that detail the hip-hop project. Nevertheless, in a statement, USAID said, "Any assertions that our work is secret or covert are simply false."

At a briefing Thursday, , U.S. State Department spokeswoman Jen Psaki said that Creative "provided USAID assurances that it had security protocols in place" for "operating in a closed society and would strictly employ those protocols for all professionals traveling to Cuba."

She said that Cubans risk upsetting authorities by being involved in normal community initiatives. But working for U.S.-funded groups is illegal in Cuba and Cubans recruited for the hip-hop program were not told they were partnering with American-backed contractors.

Aldo Rodriguez, the front man for Los Aldeanos hip-hop group, was detained on at least two occasions, spending a night in jail. A Serbian contractor was detained coming into Havana with equipment, including a potentially incriminating memory stick that worried the contractors. He cut his trip short just weeks before Alan Gross, a U.S. citizen working on another secret USAID program, was arrested.

In 2011, a Cuban knowingly working for the U.S. program was detained in Havana after a meeting with a Creative manager in Miami. Computer equipment was seized with documents linking him to USAID.

In the end, the USAID program accomplished the opposite of what it intended, compromising Cuba's vibrant hip-hop culture. When the program started in 2009, it had already produced some of the hardest-hitting grassroots criticism since Fidel Castro came to power in 1959.

In August 2010, Los Aldeanos took the stage at Rotilla, one of Cuba's largest independent music festivals. Before a crowd of about 15,000 people, they lacerated government officials by name and taunted the police.

Within months, a USAID contractor told his handlers that the Cubans said USAID had infiltrated the festival, and soon enough, the Cubans took it over. In the end, Los Aldeanos moved to South Florida after complaining that the Cuban government made it impossible for them to work in their own country.

In a written statement Thursday, the organizers of the Rotilla festival said they expected a "storm" in reaction to the revelations, one that could severely damage Cuban artists unknowingly targeted by the USAID program.

"The destruction that it will bring won't be seen in homes, structures or property. The whirlwind will drag away names, reputations and even history itself," the group wrote. "The events to come will transform or extinguish independent art and culture in Cuba."