The good, the bad and the viciously snubbed: Unpredictability rules in Golden Globe nominations

“Jane the Virgin” deserves acclaim, but “Downton Abbey” has lost its shine — and where is "The Walking Dead"? 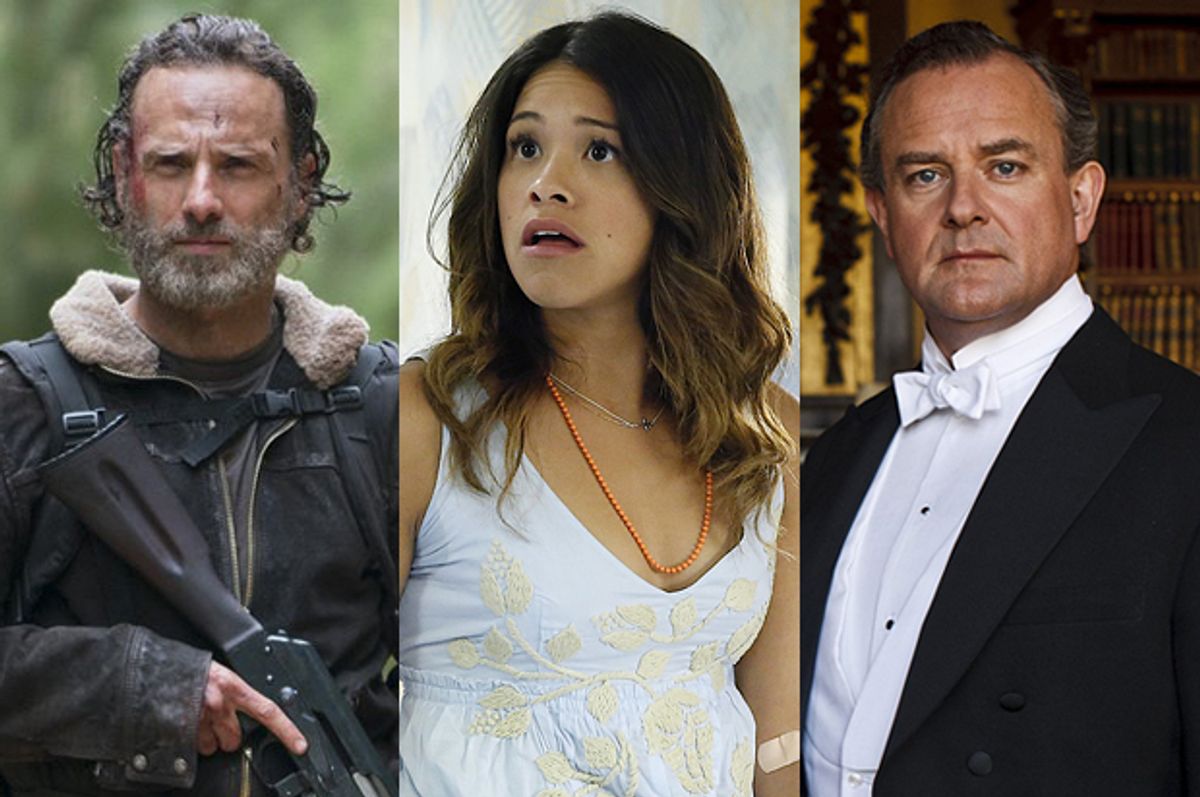 The Golden Globe Awards are often looked upon as the boozy stepsister of the Emmys and Oscars, and that's what makes them so much more fun. Add to that the fact that they’re voted upon by the Hollywood Foreign Press Association, a group that boasts fewer than 100 members -- compared to the roughly 15,000 members of the Academy of Television Arts & Sciences, the wide-ranging film industry group that awards the Emmys. Because the Golden Globes represent a much more narrow range of tastes, their selections can seem more whimsical than those of their larger academy counterparts, as some of today's nominations show.

This year, the HFPA favored offbeat freshman comedies on cable and streaming platforms over conventional network sitcoms like “Modern Family” and “Big Bang Theory,” despite their enduring popularity and even multiple nominations last year. The only network comedy nominated for best series is the breakout charmer “Jane the Virgin,” which premiered on the CW this fall. “Jane,” an hour-long comedy about a virgin who’s artificially inseminated by accident, is a sweet, intimate show that aims for big emotional payoffs, with a winning cast and an off-kilter but never mean-spirited sense of humor. Titular star Gina Rodriguez is easily the most appealing fresh face on prime time this fall, and Golden Globe nods to her and the show give “Jane the Virgin” a profile boost that can help its chances with Emmy voters next year, too.

Amazon Originals’ acclaimed new comedy “Transparent,” about a family whose patriarch comes out as transgender, could also get a leg up as it prepares to release its second season next year, with its nomination for best series and best actor (for star Jeffrey Tambor).

And a third freshman show, HBO’s “Silicon Valley,” is the sole male-heavy ensemble to get the nod for best comedy. “Girls” and “Orange Is the New Black” are the veteran nominees in this category, debuting in 2012 and 2013, respectively, and each is up for acting awards, too — Lena Dunham for "Girls," and Taylor Schilling (Piper) and the unforgettable Uzo Aduba (Suzanne/Crazy Eyes) for "OITNB." The notable snub in this category is “Brooklyn Nine-Nine,” which won best comedy series last year, proving that shows have to continue to win the devotion of the HFPA. A win one year doesn’t necessarily mean anything going forward. And they broke a two-year streak of nominating Amy Poehler for her work in “Parks and Recreation," despite the fact that she's returning again to co-host the ceremony. Awkward.

The drama category is a bit more conventional. Multiple shows beaten out last year by the juggernaut final season of “Breaking Bad” received nods again for best series, including “House of Cards,” “The Good Wife” and “Downton Abbey.” HBO’s “Game of Thrones” returned to the list of nominees after two years missing -- that awful Joffrey’s death scene alone might have brought it back -- and the category’s newest contender is Showtime’s “The Affair.”

Of all of the nominees, “Downton Abbey” feels like the only one running on sentimental goodwill rather than quality. Since its second season, the show has won or been nominated for a top category (in its first season it was considered a miniseries). But, as delightful as Maggie Smith is as the Dowager Countess (not nominated this year, alas), "Downton" has nonetheless lost much of the luster it had in earlier years, bogged down by both tedium (boring estate management plots, the will-he or won’t-he of Alfred’s culinary school adventures) and melodrama (Edith’s surprise pregnancy and missing lover, the interminable high jinks of Downton’s own Cousin Oliver, Lady Rose). While Joanna Froggat deserves her supporting actress nomination (and, indeed, could earn a win) for her portrayal of ladies’ maid Anna, navigating the aftermath of a rape, overall, the show hasn’t been terribly interesting since Lady Sybil died.

So it’s time we admitted that “Downton Abbey,” much like its aristocracy’s hold on British culture, isn’t what it used to be. Ditching it could have made room for “Mad Men” or “The Walking Dead,” two notable snubs in the best drama series category. And “Mad Men” in particular seems to have fallen out of favor with the HFPA, perhaps permanently. Once a front-runner (it won best drama series three years in a row starting in 2007), the last decent “Mad Men” Golden Globes year was 2010, when the show was in the running for best drama, along with acting nods for Jon Hamm and Elisabeth Moss. While the show has lost some of its earlier buzz, possibly because of more high-quality competition crowding the field, it also seems possible that the HFPA might have just lost interest completely.

"The Walking Dead," meanwhile, gets so little love from the Golden Globes — nominated just once for best drama in 2010; it lost — and yet it enjoys immense popularity for solid reasons: a never-ending supply of narrative tension and a strong ensemble cast working under scripts that force their characters into rigorous life-changing scenarios on a regular basis. The zombies aren’t the point of “The Walking Dead,” even though they’re always lurking right around the corner. “The Walking Dead” explores human response to power and powerlessness in brilliant ways, making it at least equal in that regard to “House of Cards” and “Game of Thrones.” At the very least, it would be nice to see the very talented Norman Reedus, whose Daryl Dixon is the unlikely heart of “The Walking Dead,” get as much recognition for his work as Kevin Spacey does for his hammy Francis Underwood, nominated for the second time this year. That would be a truly unconventional position to take, especially since the Emmys tend to recognize “The Walking Dead” for its well-deserved technical awards only.

The Golden Globes air on Jan. 11, and will once again be hosted by Poehler and Tina Fey, who can be trusted to bring out fresh Matthew McConaughey jokes when he goes toe-to-toe with costar Woody Harrelson for top miniseries actor honors for "True Detective." Like their 2014 Emmy run, they could split their votes and end up shut out. Then again, so could both "Fargo" nominees Martin Freeman and Billy Bob Thornton, leaving Mark Ruffalo to collect the statue for Ryan Murphy's adaptation of Larry Kramer's AIDS-crisis play "The Normal Heart," vindicating his own 2014 Emmy loss in the process. Or maybe not — the Golden Globes are nothing if not unpredictable, down to the last popped champagne cork.