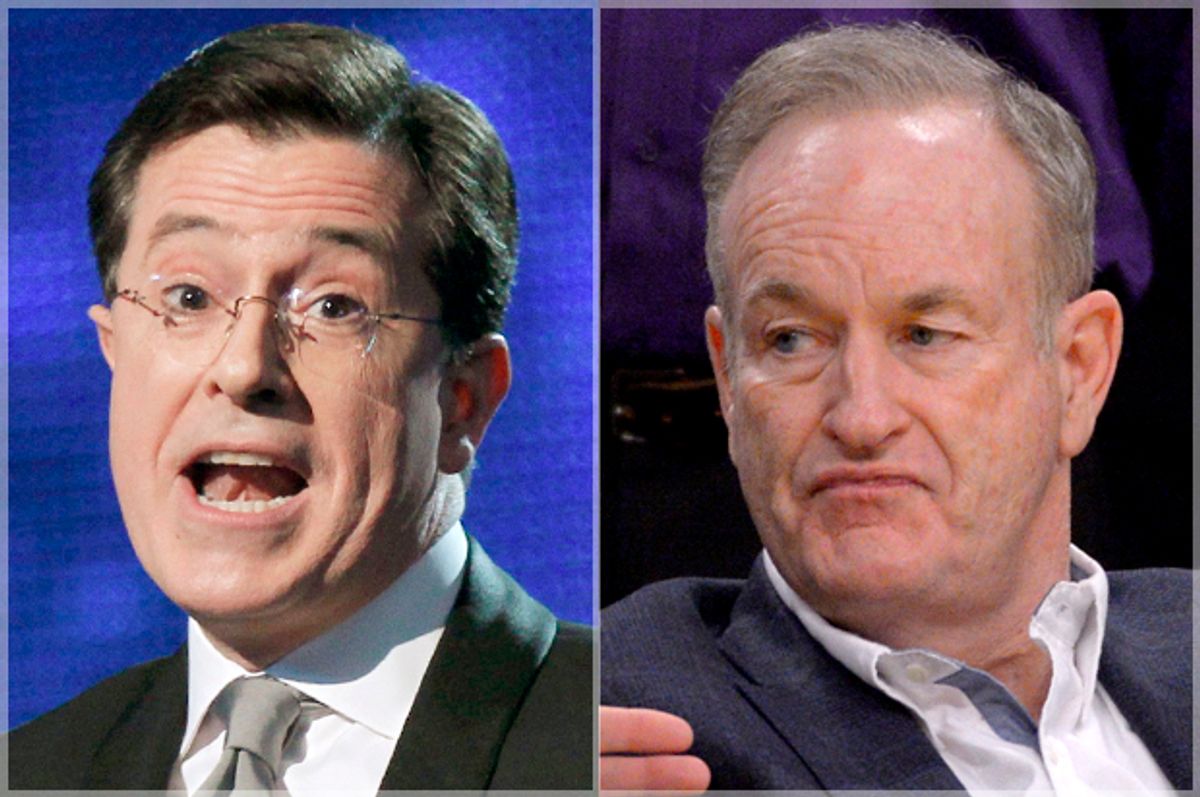 As we enter the final days of "The Colbert Report" there is much speculation about what will come next for the comedian when he goes on to host "The Late Show."  One of the most important shifts for Stephen Colbert will be that he will no longer be performing in character as a parody of a right-wing bloviating pundit.  While that shift might signal a welcome opportunity for greater creative license for Colbert, it’s worth remembering the unique features of Colbert’s character we will soon be losing — features that include Colbert’s special brand of patriotism.

Consider this: When Colbert first launched his new show as a spinoff from "The Daily Show" our nation was awash in the culture of fear that followed the attacks of 9/11.  In those pre-torture report days anyone who criticized the Bush administration was immediately accused of treason.  Those who thought the wars in Iraq and Afghanistan were ill-conceived and immoral, who staunchly opposed torture, and who believed our nation depended on an active, inquisitive and critical citizenry were silenced.  In those days it was common to hear of journalists and professors losing their jobs because they had dared to question the administration and ask more of the media.

That was the atmosphere when Colbert took the stage in 2006 to roast President Bush to his face at the White House Correspondents’ Association Dinner. Standing only a few feet away from the president, Colbert dealt a scathing blow to the hubris of the administration and the docile media that covered it.  The moment was a real watershed in our nation’s history, because it was the only time in the entire eight years of the Bush administration that anyone had directly critiqued Bush in such detail to his face.

How’d he get away with it? Well, one way he did it was by being a comedian. Behind the mask of satire Colbert was able to impersonate a Bush-loving pundit. He wasn’t disagreeing with anything Bush did — he was exaggerating his enthusiasm.  He was out-Bushing Bush. As he liked to put it: “George Bush: Great president or greatest president?”  Thus one of his favorite ploys was to play the role of the uber-patriot.  Colbert wasn’t going to let Bush and his cronies dictate what it meant to love your country: He was going to outdo them.

Now the right has controlled the idea of patriotism for so long that it is easy to forget that there is no logical reason to think that Rachel Maddow loves her country any less than Glenn Beck.  Since when did asking questions become unpatriotic? When did bursting into tears mean you care? Wasn’t our nation founded by rebels sick of an oligarchy? Somehow, though, we live in an era when folks like Beck, O’Reilly and Hannity have cornered the market on patriotism.

Geoffrey Nunberg reminds us that the right has specifically attacked the patriotism of the left for decades.  And, he notes, the attacks have largely worked.  Ask yourself if the phrase “liberal values” seems weird when compared to “conservative values.” It does, doesn’t it? Nunberg explains that that weirdness is not because the left has no values; it is because the right specifically fought to control the idea of America. Somehow along the way questioning the right became equivalent to questioning your nation.

And that’s where Colbert and his character come in.  Bolstered by the satire of Jon Stewart, whose "America: The Book" served to offer another view of what it means to be American, Colbert developed a character who was ready to reclaim American values for those who think critically.

Entering the conservative pundit fray, Colbert created a show that consistently painted him as hyper-patriotic.  As I explain in "Colbert’s America" and in "Is Satire Saving Our Nation?," one of the unique features of Colbert’s satire has been the way he defined his character as an American patriot. From the red, white and blue theme of his set to his two books -- "I Am America (And So Can You!)" and "America Again: Re-Becoming the Greatness We Never Weren’t" — Colbert’s character was deeply tied to the idea that it was time to fight to redefine what it means to be patriotic. Colbert’s books were a direct spoof of pundit books like Bill O’Reilly’s "Killing Patton," "Killing Kennedy" and "Killing Lincoln."  Colbert showed us that not only had we taken for granted the idea that the right defined patriotism, but we had also lost our own language of national values.  He reminded us that being critical can and should be a central feature of active citizenship.

Listen to any right-wing pundit’s show and you will note that it is not possible for any of them to do a segment without suggesting that they are the true patriots and that, by association, the more their audience loves them, the more they love their country. In response Colbert encouraged his fans to be the Colbert Nation. This meant that he could address his fans saying, “Now, Nation …” in a fun pun that could mean his fans or could mean the country as a whole. While adoring their pundit leader, Colbert’s fans could also benefit from the critical thinking offered by satire and by political comedy.  For the first time in decades we had a comedian critiquing the right and suggesting that such critique was the highest form of patriotism. Finally we had someone remind us that you could care about your nation and simultaneously find American exceptionalism disturbing. Colbert showed us that we are the ones that define our national identity and that it was time to get into the game.

All of this was on display when Colbert shot one of his final episodes in Washington, D.C., with special guest President Obama.  The special episode opened with a sequence depicting portraits of famous presidents — except all of them had had Colbert’s face superimposed on them.  He reminded viewers of his many interventions into U.S. politics: his rally on the National Mall with Jon Stewart in 2010; his run for president; his super PAC; his ongoing series “Better Know a District” and more. And then he did the most patriotic thing of all: He let Obama deliver a modified “The Word” segment – dubbed this time “The Decree” --where Obama playfully responded to critiques of the Affordable Care Act and encouraged the young audience to exercise their right to healthcare.

While we can console ourselves with the satirical brilliance of John Oliver on his HBO show, with Jon Stewart’s continuing tenure as host of "The Daily Show," and with Larry Wilmore’s upcoming "The Nightly Show," the fact remains that none of them will ever use satire to reclaim America for progressives like Colbert’s character did. When the character goes to rest we will lose one of the most important figures in U.S. political comedy of all time. With a boyish grin and a twinkle in his eye, Colbert reminded us that we are all patriotic when we ask more of our nation, when we refuse the status quo, when we favor truth over hyperbole, and when we remain committed to fighting for our values.