The king of DC comics on his latest series, the lack of diversity in superheroes, and the new "Wonder Woman" 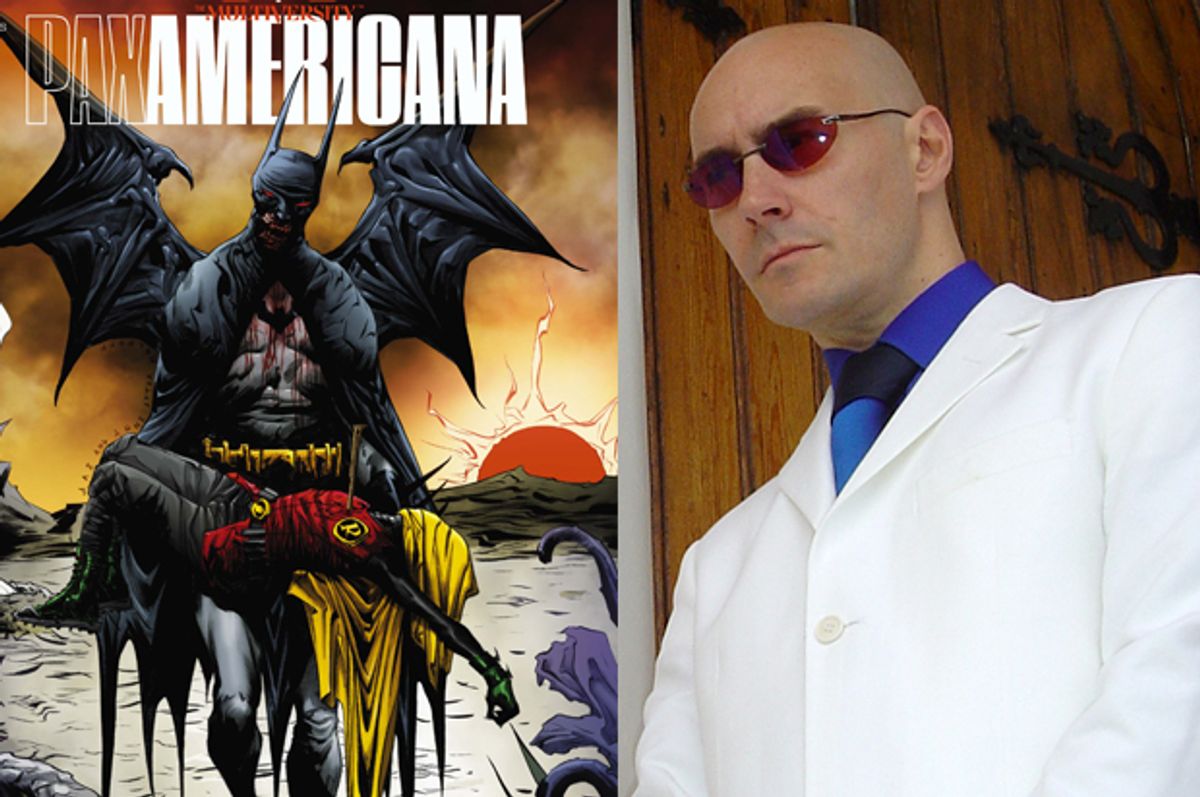 Morrison's latest DC Comics series "The Multiversity" breathes much-needed life into the nearly exhausted superheroes dragging their (mostly white and male) shells of former glory across our screens large and small. It doesn't take more than a cursory look at overwrought television series like "Arrow" and "The Flash," or jingoistic blockbusters like "Man of Steel" and "The Dark Knight Rises," to find the supergods of DC Comics on their last, wobbly legs. Even the forthcoming, painfully titled blockbuster "Superman v Batman: Dawn of Justice" is coded more like a marketing bonanza than a transformative narrative with anything important to say about the globally warmed Earth our children are inheriting. Ben Affleck finally gets to play Batman, and Wonder Woman -- played by Gal Gadot, an actress who served in the Israeli army, no underdog -- is thrown a token cameo bone. Roll credits, cash checks.

This empty-headed hyperconsumption and narcissism is gleefully skewered in "The Just," one installment of Morrison's destabilizing "Mulitversity," which accelerates outward as a series of first issues in search of an existential convergence. The culture industry's racial and sexual sameness is also sharply dissected -- if accidentally, according to Morrison, who now splits his time between Scotland and Hollywood -- in the first eponymous, apocalyptic issue of "Multiversity," which doesn't include a single straight white male.

Along the way, comics, history and fringe science are retconned, reimagined and rebuilt from the genes up, in what Morrison calls a dizzying "hyperfiction" -- revolutionized most notably by his '80s and '90s work on "Doom Patrol" and "Animal Man." In this new century, hyperfiction has stepped into the void of 20th-century postmodernisms like metafiction and the fourth wall, which, like most everything humans desperately try to hold onto, have lost their once reliable meanings. Whether he's swimming in the multiverse's primordial soup, or the shark tank of Hollywood still loathe to commit to a DC Comics risk-taker when boring golden boys like Geoff Johns ("Green Lantern," "Arrow," "The Flash," ad nauseam) are getting paid to do nothing challenging, Grant Morrison is always pushing the tenuous envelope of our tender existence well past its breaking point. Even if that breaking point leads directly to, as he explains, "Orange Batman, Diet Avengers, Butterscotch Wolverine and Sabertooth Praline."

Salon spoke to Morrison about all of this and much more, including the infinite crisis that has sadly become humanity's cultural continuity. You know, the one where, as Morrison explains, "any given baddie has to gnaw at the very roots of Batman’s being, fuck up the private lives of his friends and relatives, make him doubt his raison d’etre, set his postal district on fire and blow up his cave."

How does "Multiversity" communicate your interest in science on multiverses, quantum mechanics and particle physics?

Well, nature is infinitely prolific, fecund and, above all, wasteful. S/he appears to enjoy making multiple doomed copies of all kinds of things, from microbes, ants and people to stars, so why not universes too?

Access to multiple universes, of course, means we can now fuck this one up royally, safe in the knowledge that somewhere Grant and Scott and everybody we like surely inhabit a far better version of this world -- with teleport devices, jet packs, space and time machines and only the finest music and entertainment on tap!

How does multiversity allow writers to escape the past, so to speak?

I try quite hard to squeeze my stories into the intriguing spaces left behind by previous and current generations of creative people at DC Comics. The 52 worlds I settled on as comprising the known Multiverse are all based on existing published stories. In some cases I streamlined the original ideas, or otherwise radically “re-imagined” and revamped them, but the basic list of parallel worlds that I worked from has been around for years. One of the reasons I like working inside long-established comic book universes is the opportunity it gives me to root around in the debris of an artificial landscape sustained by generations of imaginative, often intoxicated and undeniably creative young people.

Was it a freeing experience to run wild inventing new Earths and (anti)heroes, while tearing down established ones?

I tried to color within the lines. DC Comics has a rich history of parallel Earths and as I said, I kept the ones I liked, sharpened them up a little, and created a few new universes (!) based on rival superhero comic book publishers like Marvel, Image or Extreme. For some perverse reason, I get off on taking money for making up daft analogues of existing characters, like “Spore” instead of “Spawn,” “Major Max” instead of “Captain Marvel,” or “Doctor Nemo” instead of “No-Man.” There’s quite a bit of that and it’s all in the upcoming “Multiversity Guidebook,” where you’ll see analogues of Rob Liefeld or Kurt Busiek’s own analogues of DC and Marvel characters. These are twice-removed analogues -- copies of copies -- where something like Busiek’s Captain Marvel stand-in, the tuxedo-wearing Gentleman, becomes Earth-34’s L’il Abner-lookin’ Good Guy. Where Rob Liefeld’s Wonder Woman knock-off, Glory, turns into Earth-35’s Majesty, Queen of Venus and so on. Riffs upon riffs of riffs. It’s like guitar feedback.

Does this tend to push comics toward infinite crises (which seem to be the new industry continuity)? Or perhaps depersonalize them?

A comic will always be more “personal” than a DVD or CD, both of which require electronic “players” to decode their content. With comics, the reader is the player so the engagement with the material is always more fundamental and dynamic. Reading comics is a much less passive activity than consuming CDs and DVDs.

And you’re correct: the “crisis” is now the default superhero storytelling mode. Every comic book hero -- TV heroes too, like "Doctor Who" -- must inevitably, relentlessly, repeatedly face a dedicated threat to his or her very essence and core. It’s no longer sufficient to commit a weird sort of crime in Gotham City; any given baddie has to gnaw at the very roots of Batman’s being, fuck up the private lives of his friends and relatives, make him doubt his raison d’etre, set his postal district on fire and blow up his cave. Poor old Batman seems to lurch from one apocalyptic life-ruin epic to another these days with barely a pause for breath, making me long for the days when he jumped around at night helping people or solving mysteries that didn’t lead to some aeons-spanning plot by the ultimate villain to do the ultimate Bad Thing. And the Caped Crusader’s not the only perma-victim of the Ebola-like “crisis” epidemic. For a while it was genuinely thrilling to watch our heroes facing such directly focused threats to their meaning and relevance, but now the “crisis” approach, where every day is “The Day Evil Won,” is beginning to feel like another grim, played-out sales strategy with diminishing creative returns.

Speaking of personalization, I love how Multiversity breaks the fourth wall and self-consciously speaks directly about itself.

Thanks. I was directly influenced by Stan Lee’s method in the early days of Marvel comics, where Stan’s unapologetically intrusive authorial voice spoke to the reader as if he was in the room with us, leaning over our shoulders and commenting ironically on the book in our hands. You might say he created a precursor of the DVD commentary track. Stan integrated his outlandish technique so smoothly into the storytelling that even now we barely notice how arch and artificial it is. The first “Spider-Man” story is arguably more “meta” than anything I’ve attempted, yet it’s rarely discussed in those terms – the comic talks directly to the reader, pitches itself to the audience on page 1 and draws attention to its own status as a piece of fiction that’s being presented for your enjoyment. And it does so without sacrificing our immediate emotional connections to the characters or any suspension of disbelief.

I love that the first issue of "The Multiversity" is full of people of color, from black superheroes and politicians to aboriginal gods and gay geeks. Why did you do this, and does it have anything to do with the super-white superheroes who have made the jump from comics to film and TV?

To be honest, it happened quite naturally and wasn’t something I did consciously. A couple of characters were ones I’d created for “Final Crisis” and others were new, but all of them were introduced to play specific roles in the story and it wasn’t until I’d finished writing the first issue that I realized my team of superpowerful, multiversal justice champions didn’t include a single straight white man.

I live in a world defined by a diversity of skin color, sexual orientation and opinion. I think it’s important to reflect the influence of that world in my “art.” An accident of birth has made me what I am -- a middle-aged and obviously decaying white dude from the west of Scotland -- so I’d never presume to elect myself a spokesperson for any minority or group. I’m not trying to make political points here but I do feel it’s important to reflect a world in the comic books that more closely approximates the world in which I find myself living. And basically, I identify with everyone who ever felt like an outsider.

I don’t tend to divide the world by color, religion or sexuality; in my simple binary universe, there are Good Guys and there are total Wankers.

You recently ventured into the dense mythology of Wonder Woman. Any thoughts on how she should make the jump to film and TV?

I’ve had many thoughts. When I worked as a consultant at Warner Bros., I pitched a Wonder Woman movie loosely based on my upcoming “graphic novel” with Yanick Paquette. Like all my other efforts it went in the Drawer That Forgets. My story starts in myth, with the Amazons and Hercules, but I think I prefer Max Landis’ idea for an opening -- with a young superhuman girl washed up with no memory on a beach in Miami. That seems more like the first scene in a modern Wonder Woman movie.

How do you think the comics industry overall is doing when it comes to female heroes, readers and role models?

It seems to be trying a little harder.

Has Hollywood given you a call yet?

I’ve been earning pretty good money in the movie business for 10 years. Kristan and I even bought an apartment just off Sunset Strip because we love the place so much and spend four months of every year there. I’ve written -- and been paid for -- three studio pictures and I consulted for Warner Bros. on their superhero stuff for two years along with Geoff Johns and Marv Wolfman. I’m writing another studio screenplay right now and there’s the TV stuff I mentioned above. However, until something gets made, dabbling in the pictures is a lucrative hobby for me. Doing comics, I get to write stories every day, knowing they’ll be published without endless rounds of notes and rewrites and that they’ll be read by enthusiasts within months of their creation... comics will always be my first love.