The lowbrow magic of "Adult Swim": Why you should be watching the network's fake news show

"Check It Out!", a satire of showbiz with John C. Reilly, is even better and weirder than "Too Many Cooks" 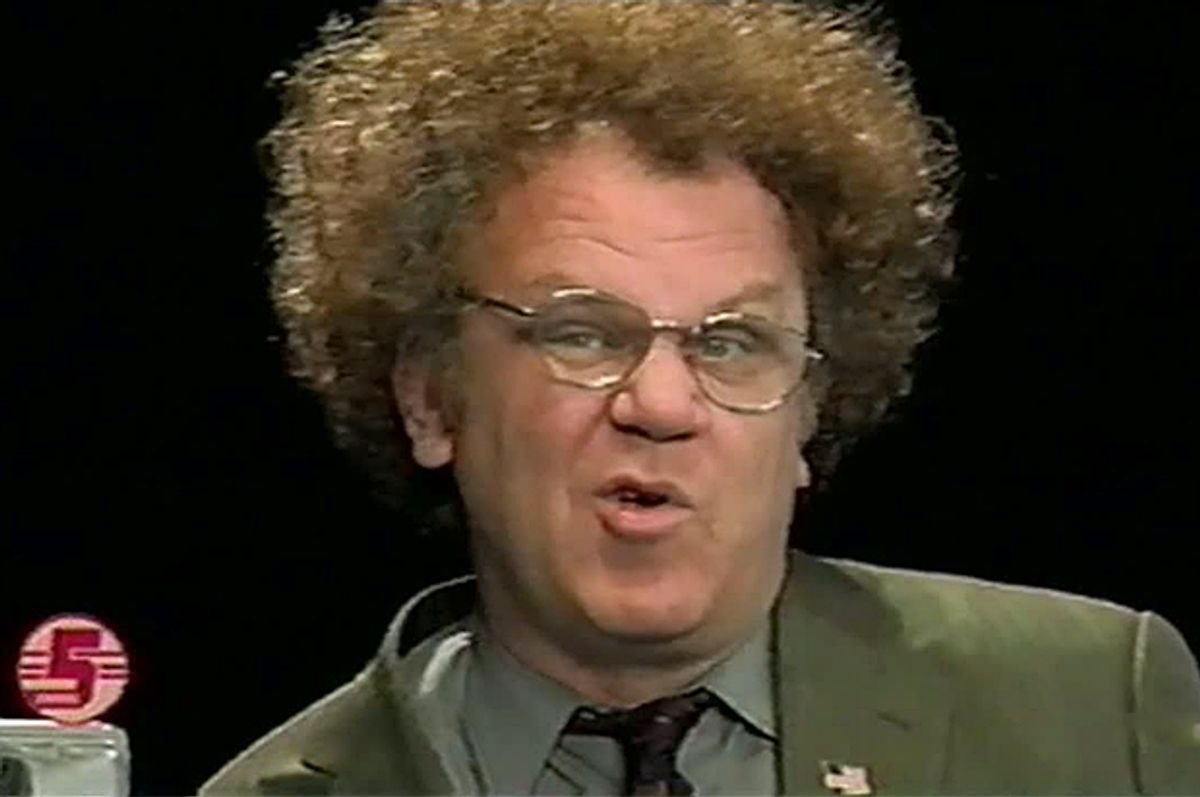 Until recently, Adult Swim was an esoteric source of entertainment for insomniacs, negligent security guards and bong-hitting teens in basements nationwide. Now, thanks to an 11-minute special called “Too Many Cooks,” the low-budget cable network has become something of a digital household name. As I write this, "Too Many Cooks" boasts more than 4 million views on YouTube. That’s nearly the population of New Zealand. Imagine what would happen if all those people joined together physically to protest neoliberalism or occupy banks or create the world’s largest papier-mâché dog: incredible.

Yet there’s another show on Adult Swim that deserves as much, if not more, attention. It’s a spin-off of “Tim and Eric’s Awesome Show, Great Job!” by Tim Heidecker and Eric Wareheim, called “Check It Out! with Dr. Steve Brule.”

Formally, “Check It Out!” is something of a mock educational news show, and each episode obeys the same simple formula. Its host, Dr. Steve Brule (John C. Reilly), swivels atop a non-swiveling chair on a poorly lit and shoddy stage set, and fails to make eye contact with the proper camera. He recites an atrocious poem or song by someone he knows, often a relative whose name he mispronounces, in order to introduce a topic of interest: Boats, Pleasure, Children, etc. Then he spends the rest of his 11 minutes checking said topic out. He travels to relevant places (a harbor to check out boats, a candy store to check out pleasure, a daycare center to check out children), and he interviews relevant people (a captain of a boat, an employee at the candy store, a molester of children), some of whom are actors, some of whom are not. All the while Dr. Brule offers recommendations “for your health.” Generally, things get worse for Brule as the episode progresses; he hurts himself physically, emotionally or otherwise. At the end the episode he returns to the set, dazzled, injured and often traumatized, to summarize what “we learned.”

Dr. Brule is a hyperbolic man-child. He’s a big blundering baby who calls himself a doctor despite being stupid enough to eat seafood from a dumpster. Psychologically, he’s as mature as an 8-year-old. He refers to his penis as his “dangus,” habitually deems other people “dingus,” and during the intro to the episode “Pleasure” he admits, seemingly ad lib, “One time I saw a bobo rub his dangus and it made milk.” Brule is also one of the funniest and most distinct characters on TV.

There are many characteristics uniquely Brulian: how he adds “r” to words that lack it (“poem” becomes “proem,” “boat” becomes “broat,” “God” becomes “Gord”); how he blows kisses to people he admires; how he labels men he dislikes “hunks”; how he nods and mutters, “I know, I know,” when he clearly doesn’t know; how he yells “check please!” when he thinks he’s been clever; how he never fails to mispronounce names (he calls Cynthia Driscoll “Cynthia Drangus”); how he expresses his need for parent figures; how he hints at past trauma (his mother poisoned his food when he was young to “slow [him] down”); how he walks; how he talks (“one of paper equals four of coin”); how he looks at once smug and alarmingly confused; how he introduces people by their position and then their name (“mother, name of Dorris Pringle-Brule”). Dr. Brule is distinct and nearly impossible not to mimic; watch enough of him and you'll feel almost possessed.

In interviews, John C. Reilly, who’s been nominated for both a Tony and an Oscar, refuses to explain how he came up with Brule. Of course, no artist creates in a void; Reilly has his influences. Yet part of the mysterious appeal of Brule, and Reilly himself knows this, is the sense that he’s a wholly original figure, imprisoned in a weird and ugly nightmare of 4 a.m. cable TV that no one watches, a nightmare of cheap sets, low budgets and desperate out-of-work actors — a nightmare, in other words, of showbiz.

And it’s the reality of this nightmare, the nightmare of showbiz, that “Check It Out!” so brilliantly exposes, through both its form and its content.

On the level of form, “Check It Out” is cheaply made and Tim and Eric choose to make it look even cheaper: scenes end too abruptly or they linger; cameras lack resolution; green-screen graphics are sloppy and ugly; captions are slapdash; audio effects skip or repeat or fail to synch; in post-production, the video is piped through VCR to simulate poor production values; and more. All of which combines to create the nightmarish effect, as Heidecker noted in an interview with Entertainment Weekly, that “at 4:30 in the morning [Brule] sneaks in to the studio to make [the] show without getting permission.” Actually at the end of the episode “Food,” a security guard kicks Brule off the set.

On the level of content, “Check It Out!” exposes the nightmare of showbiz by casting amateur actors. For Wareheim, “There’s nothing less funny than someone who looks cool,” and none of the actors on “Check It Out!” look cool or even OK. Wareheim and Heidecker select some of them from Craigslist. Watching the show encourages viewers to wonder who’s in on the joke and who’s being exploited. It encourages viewers to ask: Why are these actors doing this? Are they desperate for the work? Are they poor? Are they mistreated? Is this what showbiz is really like?

This is likely why “Check It Out!” remains relatively unpopular, even among the misfits who watch Adult Swim. Viewers don’t want to watch the ugly nightmare that is showbiz. They’d rather watch the pretty dream. I was tempted, when I started watching “Check It Out!” a few months ago, to lump/dump the show in with “low culture,” and to think of my interest in it as being that of a “cultural omnivore’s.” Now, though, I think the show is somehow lower than low culture. There’s a Radiohead lyric that goes, “I hit the bottom and escape” and the show does something similar. It falls so deeply into the nightmare of showbiz that it escapes the whole high/low binary from the bottom, or at least being evaluated by it.

And “Check It Out!” only gets away with this, of course, because it’s granted comedic license. If the show were somber about its intent, it might find airtime in an experimental film festival, but certainly not on cable TV. Thankfully, “Check It Out!” is hilarious. If you watch it, you might very well grow obsessed with it. You might become possessed by Brule, as I have. In any case, check it out.

Adult Swim Check It Out Editor's Picks John C. Reilly Too Many Cooks