Pro tip: If you're looking to please a woman in bed, don't try to re-create scenes from your favorite videos 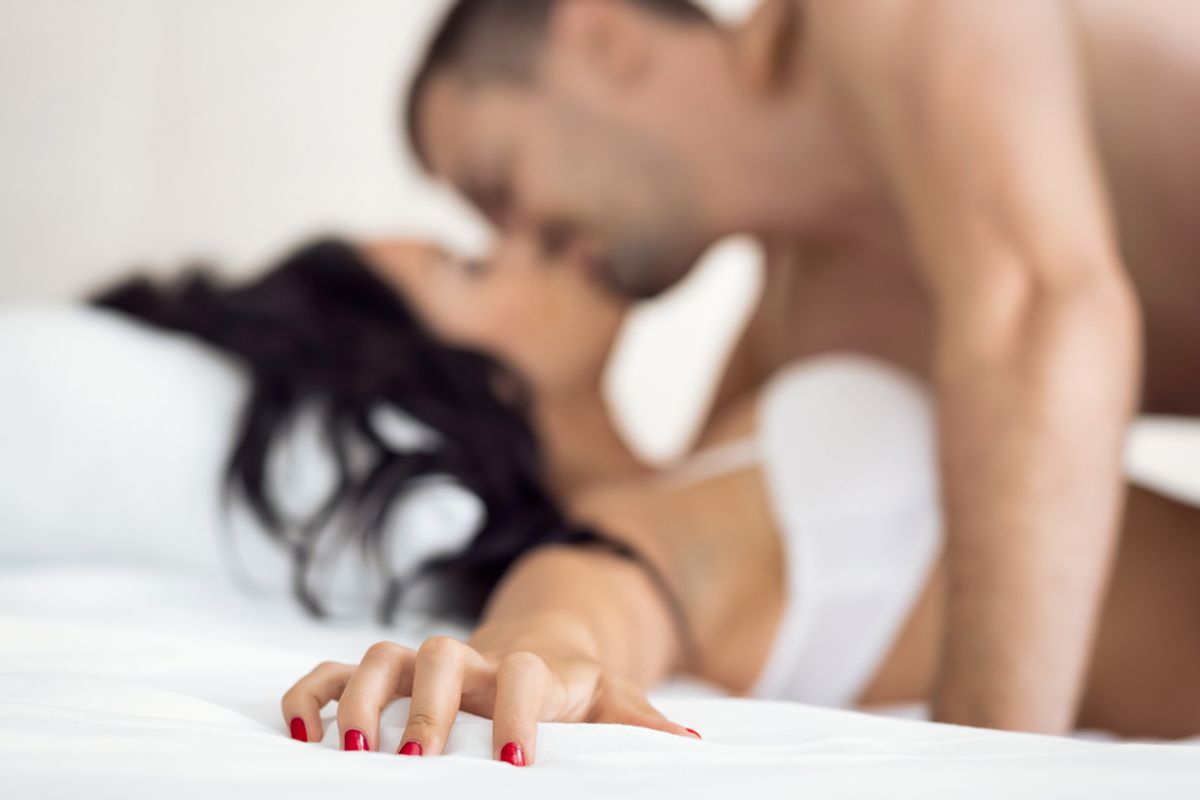 So, lesson number one: “robotic fucking of women's orifices,” maybe a "no” on that. But with that off the table, what do you do instead? Great thinkers from Ovid to Master Tung-hsuan to Naomi Wolf have offered their own answers, and there are certain Great Truths that run through them all.

“Most men, if you breathe on them or look at them the wrong way, they're ready for action. But for most women, you have to get between their ears before you get between their legs. You have to build the story,” says Adam Sheck, aka the Passion Doctor.

According to studies by Marta Meana, president of the Society for Sex Therapy and Research, being desired is the source of a woman's desire. It is “at once the thing craved and the spark of craving,” explains Daniel Bergner in his beautifully written book, What Do Women Want?

So, by all means, let a women know that you think her body is insanely hot, so hot you can barely take it, and it's making you hard just thinking about her. (Ratchet this language up or down, filth-wise, depending on the chick.) Tender, respectful love is fine enough but please note that approximately 1 billion percent of romance novels are about a woman inciting a passion in a man that is so savage and hungry he can barely control himself. (Spoiler: he doesn't.)

Don't Be Afraid to Ravage

The desire to be taken by force consistently sits there, all petulant and non-PC-like, among women's top sexual fantasies. This doesn't mean that women want to be raped, obviously, but it is related to the tip above on desire. Being taken strongly and urgently is a clear physical expression of a male's searing desire for a woman. Bergner describes Meana's take on it thusly: “The ravager, overcome by craving for that particular women, cannot restrain himself; he tears through all codes, through all laws and conventions, to seize her, and she—feeling herself to be the unique object of his unendurable need—is overcome herself.” (See above: plot of every romance novel.)

“For the heterosexual female 'ravish me' fantasy, the man embodies the masculine and takes charge with those masculine qualities to be focused, direct, relentless in pursuing his goal, in this case, loving his woman into 'submission.' This can range from simply initiating sex, to being a little more assertive than usual, to being more aggressive, to being a little 'rough' all the way to role play and using restraints and sex toys,” writes Sheck. “I’m 6’3″ and around 200 pounds and have found that many woman have simply enjoyed the weight of my body pressing into them and found that arousing. Perhaps that is enough to begin your journey. I also happen to have large hands and usually able to hold both of a woman’s wrists in one of my hands. Even that small step can often be assertive enough to feed into the submission fantasy.” (It should not need to be said that this type of sexual activity requires clear consent and a figuring out of boundaries.)

Focus on Touching Without Goals

“The whole sexual experience can be totally enjoyable, but most men and women are taught to go straight for climax. We educate guys to enjoy the whole ride,” says consultant Robert Kandell, who coached men at Onetaste, where orgasm is defined as the entire sexual experience beginning at the first thought of making out with someone. He offers a metaphor: “The climax of a symphony is the cymbals crashing at the end, but that’s not the main draw."

What is “the whole ride”? “Non-genitally focused sexual behavior, referred to popularly as 'foreplay'...is a broad category of activities which are usually undertaken with the goal of increasing one’s own and/or one’s partner’s sexual arousal and pleasure. These activities can include, but are not limited to, kissing, stroking, massaging, and holding anywhere from one part to the entirety of a partner’s body,” writes Adena Galinsky, in an almost comically unsexy passage.

The More Time You Put in, The Hotter It Gets

The mid-seventh-century sex manual Ars Amatoria of Master Tung-hsuan advises much “dalliance before penetration.” “He presses on her slender waist, he caresses her precious body, he whispers endearing words and engages in passionate discourse,” writes the Master. There is extensive stroking, loving gazes, and deep rich kisses until the Jade Stalk rises “standing strongly, pointing upwards like a lonely peak towering high up in the Milky Way” and the Cinnabar Crevice becomes “moist, exuding a rich flow of secretions like a lonely well springing up in the deep vale.” Even when it gets to the point when the man is kneeling between his lover's open thighs, Jade Stalk in hand—and it's pretty clear what's going to be going down—he continues to tease and woo, letting his member “play about in this portal” while continuing his impassioned speech, sucking her tongue and stroking her belly, breasts and labia.

In another Ars Amatoria (The Art of Love) the Roman poet Ovid counseled lovers of 2C.E. to take their time in love, too: “If you will listen to me you will not be too hasty in attaining the culmination of your happiness. Learn by skillful maneuvering to reach your climax by degrees. When you are safely ensconced in the sanctuary of bliss, let no timid fear arrest your hand. You will be richly rewarded by the love-light trembling in her eyes, even as the rays of the sun fitfully dance upon the waves. Then will follow gentle murmurs, moans and sighs, laden with ecstasy that will sting and lash desire.” Sigh.

Whether You Think It's a G-spot or Not, Try Stroking It

"Find her 'sacred spot,' then hang out there far longer that you think is necessary," writes Naomi Wolf in Vagina: A New Biography. While scientists are still dithering about whether or n ot there is a G-spot, Tantric masters have been in there stroking said spot and making the ladies come. Carefully, slow stroking of the spot-—which is part of the whole neural tangle, but can also be considered to be sort of a back end of the clitoris—is highly effective at making women purr for you. In one study researchers gave 89% of their female subjects orgasms by "systematic digital stimulation of both vaginal walls." This despite the lab conditions and calling it "systematic digital stimulation of both vaginal walls."

Don't Lock Into a Successful Sequence of Moves

A systematic approach in which a man “politely lets himself into the vagina, perhaps waiting until the retraction of the clitoris tells him that he is welcome, is laborious and inhumanely computerized,” writes the ever-blunt Germaine Greer in The Female Eunich. “The implication that there is a statistically ideal fuck which will always result in satisfaction if the right procedures are followed is depressing and misleading.”

“You want to be present. You want to feel what you're partner's feeling, you want to sensitive to the amount of lubrication, to the engorgement of the labia. And from there, you know when to be rough, when to be aggressive, when to pull on hair, when to smack things, when to be kind,” says Sheck. “It's really a tuning to the body.”

A Well-Fucked Woman Kind of Loses It (And That's Good)

“Feminine sexual excitement can reach an intensity unknown to a man. Male sexual excitement is keen but localized, and—except perhaps at the moment of orgasm—it leaves a man quite in possession of himself; woman, on the contrary, really loses her mind; for many this effect marks the definite and voluptuous moment of the love-affair, but it also has a magical and fearsome quality,” writes Simone de Beauvoir in The Second Sex.

When a lover stimulates a woman properly, it sets off all kinds of chemical tomfoolery. A lover who suckles a woman's nipple, for example, will set off a release of the bonding chemical oxytocin, and she, perhaps without quite realizing why, will favor that lover over another. When a woman is fully relaxed, open and receiving pleasure she can enter sort of a trance state. And when a woman has an orgasm, she gets a heavy dose of opiates, the regions of her brain involving self-awareness and inhibition going dark.

"This can feel to the woman involved like a melting of boundaries, a loss of self, and, whether exhilaratingly or scarily, a loss of control," writes Wolf. If a man gives his lover a deep, deep orgasm, a woman can have a profound experience. Some women will feel an exquisite rapture, some will burst into tears, and 100% will take that dude's call next time around.