Elizabeth Warren and the "Present Tensers": A ridiculous political over-reading (that may be true)

The progressive firebrand says flatly that she's "not running for president." This may secretly mean that she will! 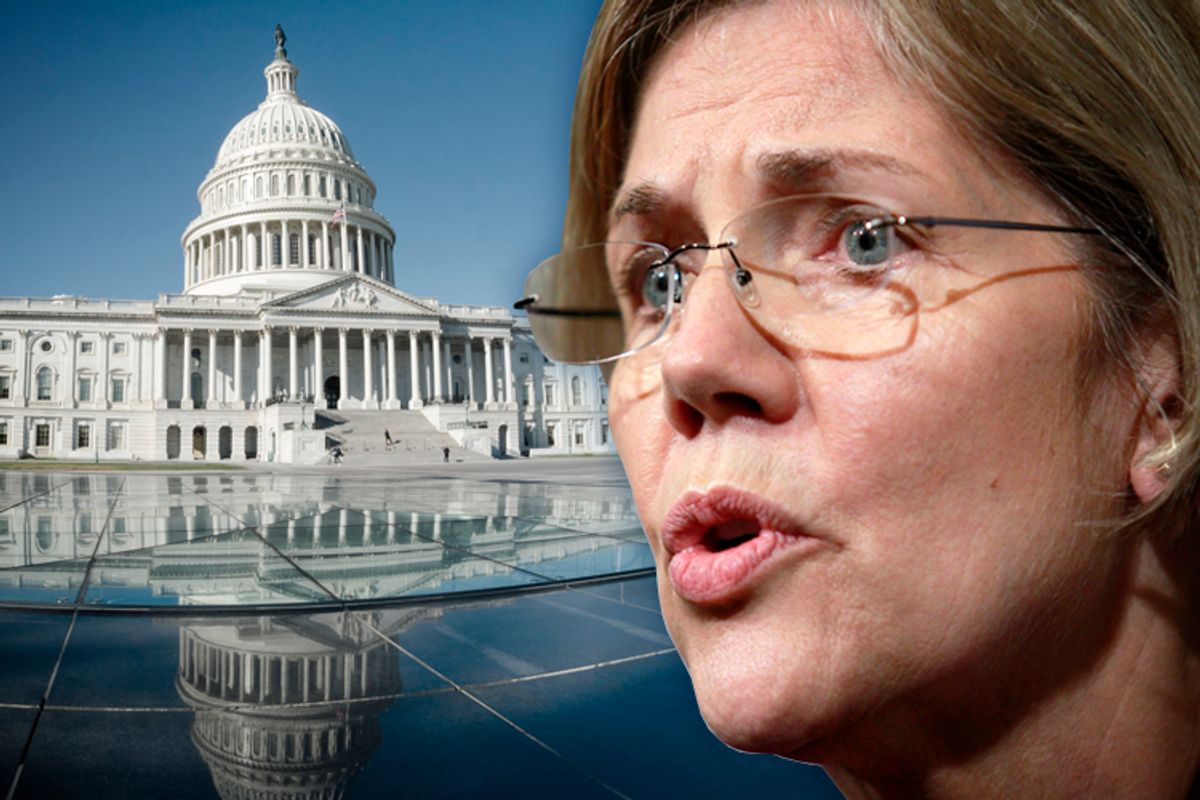 There is a very simple way to think about Elizabeth Warren and the 2016 presidential election: that she doesn't want to get into it, just as she constantly says she doesn't.

She's still a relatively junior senator and, as her recent battles over a Wall Street-certified Treasury nominee and the "cromnibus" language weaking Dodd-Frank show, she's leveraging her status to affect those financial sector issues of most importance to her. She's in the Senate leadership now and plays a hand in party "messaging" -- even though, as the ultimate passage of the "cromnibus" showed, it's a hand still subject to the veto of Sens. Chuck Schumer and Harry Reid. Organizations like the PCCC and MoveOn may push "Draft Warren" movements, if only for the purposes of garnering attention and raising their profiles/war chests.

Inskeep: Senator Warren, as you must know, that even as you were fighting over this in the Senate, there was a group called Ready for Warren that wants you to run for president, that released a letter signed by more than 300 people who describe themselves as former Obama campaign workers and staffers and aides. They want you to run. What do you say to them?

Warren: I'm, I'm not running for president. That's not what we're doing. We had a really important fight in the United States Congress just this past week. And I'm putting all my energy into that fight and to what happens after this.

Inskeep: Would you tell these independent groups, "Give it up!" You're just never going to run.

Warren: I told them, "I'm not running for president."

Inskeep: You're putting that in the present tense, though. Are you never going to run?

Warren: I am not running for president.

Inskeep: You're not putting a "never" on that.

Warren: I am not running for president. You want me to put an exclamation point at the end?

Nope, no exclamation point necessary. All that's needed to put an end to this gossipy charade is a use of the future tense: "I will not run for president." Until she clearly expresses the intentions of her future self, the media/advocacy industry that's squatting in her vacant presidential campaign headquarters will not go home.

The "But Elizabeth Warren Only Talks About Running for President in the Present Tense!" reading is a completely hilarious political theory that may also have the benefit of being true. It may really be the case that Elizabeth Warren is considering running for president and has settled on a grammatical maneuver to keep her intentions private.

But... Warren has had months to clarify and brush off this pedantic point, and here she is, still using the present tense. NPR's Steve Inskeep even asks her about the present tense thing, and she keeps on keeping on in the present tense. She is not running for present, today, at this minute, on this Monday morning, on NPR. Factually true.

This doesn't mean that she is DEFINITELY GOING TO RUN, but sure, she's keeping the door cracked open. Even if she's already decided in her own head that she Will Not Run, it helps the ol' personal brand to string people along. It brings attention to her and her pet issues. Were she to rule it out Gen. Sherman-style, horserace reporters might stop caring about her and whatever complex financial derivative mumbo-jumbo she's always going on about.

And if there is something more to this than a means of keeping the spotlight on herself -- if she really is planning a run -- this is a smart way to go about it. If you're a first-third-of-your-first-term senator, and the party apparatus is rallying itself around Hillary Clinton, with all the implicit threats to would-be viable challengers that that implies, play-acting modesty is wise. You're just keeping your head down and focusing on your Senate business and the people of Massachusetts, etc., you're not thinking about the White House and all that fancy stuff. Then, once all the pressure is bottled up, and a sizable element of the party is begging you to run, you can jump in with an "aww shucks, well, sure." It gives off the appearance of being drafted. You wouldn't have dared considered storming Hillary Clinton's coronation on your own, but now you have no choice.

As always, keep in mind that a lot of Democrats love Hillary Clinton, to the extent that she's the most prohibitive frontrunner for a party nomination ever.