From "The Newsroom" to the NYT Op-Ed page: How Sorkin's crusade against the media compares in fiction and in life 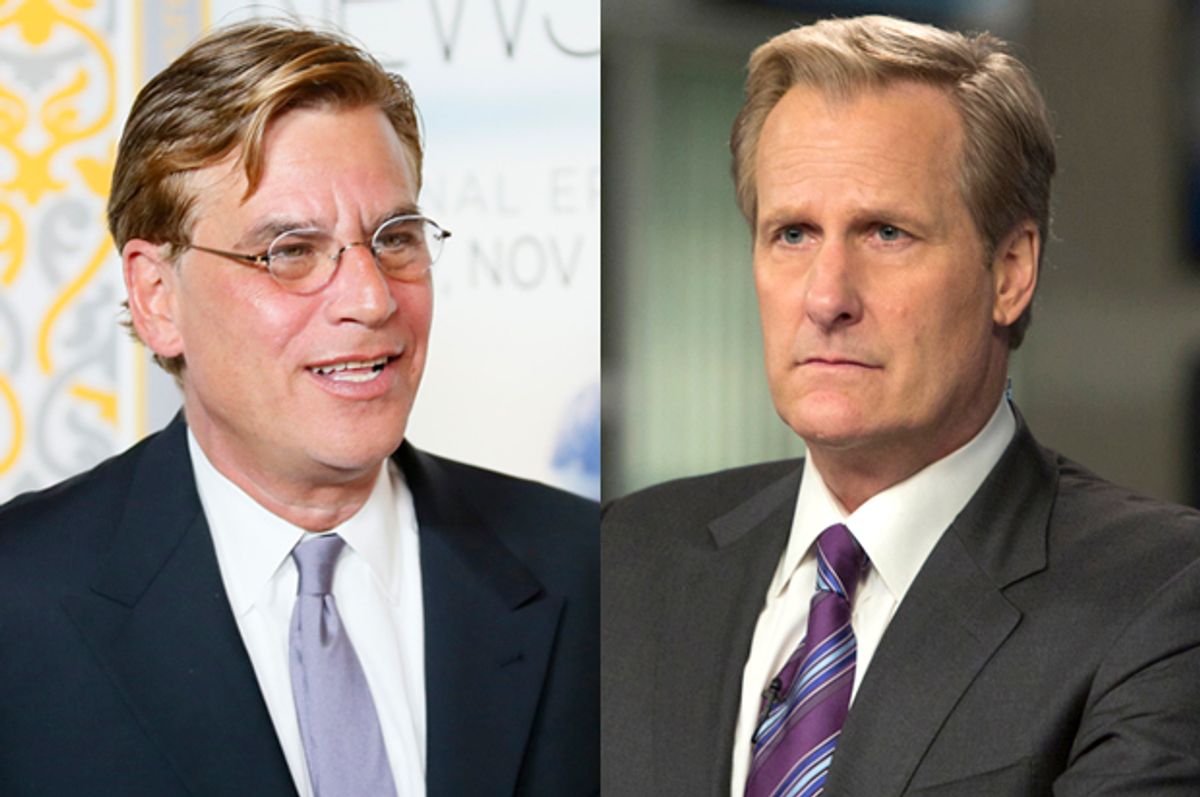 Aaron Sorkin; Jeff Daniels as WIll McAvoy in "The Newsroom" (Reuters/Danny Moloshok/HBO)
--

In last night’s finale of “The Newsroom,” Will McAvoy delivered an impromptu eulogy for the late, quixotic Charlie Skinner in which he promised that he and the team, led now by MacKenzie McHale, would carry Charlie’s banners going forward. “His religion was decency, and he spent a lifetime fighting its enemies,” said Will, delivering the thesis of “The Newsroom” in the Sorkiniest way possible.

That is, until you recall that Sorkin did something perhaps even more Sorkin-esque this weekend: He took his fight against the enemies of decency to the New York Times Op-Ed page, decrying the publishing of embarrassing emails and other internal business documents leaked by the Sony hackers. He stopped just shy of calling the media outlets who reported contents of the hack “un-American” through the time-honored “I’m not saying, I’m just saying” rhetorical device. He opted instead for the understated “morally treasonous and spectacularly dishonorable.”

Second-guessing the media has been the lifeblood of “The Newsroom,” but because the show usually covered old stories, Sorkin’s postmortems seldom bled over into the real news. He lucked out on timing for his final two episodes. Between last week’s peek into how the religion of decency demanded Don Keefer believe an accused rapist over his accuser -- which neatly tied into the coverage of the Rolling Stone UVA rape story -- and this week’s Op-Ed on the morally treasonous waters of the gossipy press, he accidentally secured a well-attended funeral for a show that had been gamely trotting toward its end for much of its final season.

What the finale of “The Newsroom” reveals is Sorkin’s inconsistent attitudes toward how the media covers the entertainment and media business -- when that reporting is justified and when it’s an outrage. While Sorkin shames the real media for using the hacked emails to write about gender pay discrepancies at Sony (“Do the emails contain any information about Sony breaking the law? No”), he ties up the Lucas Pruit future-of-ACN problem with a fictional media-intensive subplot that is practically ripped from the Sony hack headlines.

In the limo ride between Charlie’s service and burial, we learn that Pruit is co-owner of a ridiculous beverage company that Valleywag reports has a gender pay parity problem. Leona confronts him with what she’s read. In the Sorkin-verse, the gossipy press is a useful tool when it furthers one of your hero’s (totally moral) business objectives — exposing Pruit by whatever means necessary. Then, Leona delivers the second of the one-two “problem with women” punch: She knows Pruit hired scantily clad models to work his birthday party. Pruit is incredulous that she knows all the pertinent details — is there a leak in his circle? It’s cool, though, he has a damage control plan. It involves exploiting the willingness of the press to cover topics that aren’t strictly speaking newsworthy. “Business Insider’s going to do a profile on me in which I will be likable,” says Pruit, ever the optimist. Leona, the pragmatist, shuts him down: “You have a PR problem because you have an actual problem.”

Pruit’s actual problems allow Leona to scuttle him out of the way in order to secure the future of ACN and, presumably, decency. Sony’s actual problems might lead to greater corporate cybersecurity measures, so that sensitive information like Social Security numbers and passwords are more secure, but it could also lead to some serious reflection and even corporate reform on how Hollywood power elites conduct the business that so strongly shapes how we understand and experience our culture. Or maybe not. The religion of decency might have its limits.