I was a rock 'n' roll groupie: My lifelong obsession with Dimebag Darrell

On the 10th anniversary of Dimebag Darrell's death, a reflection on a youth spent marveling at him 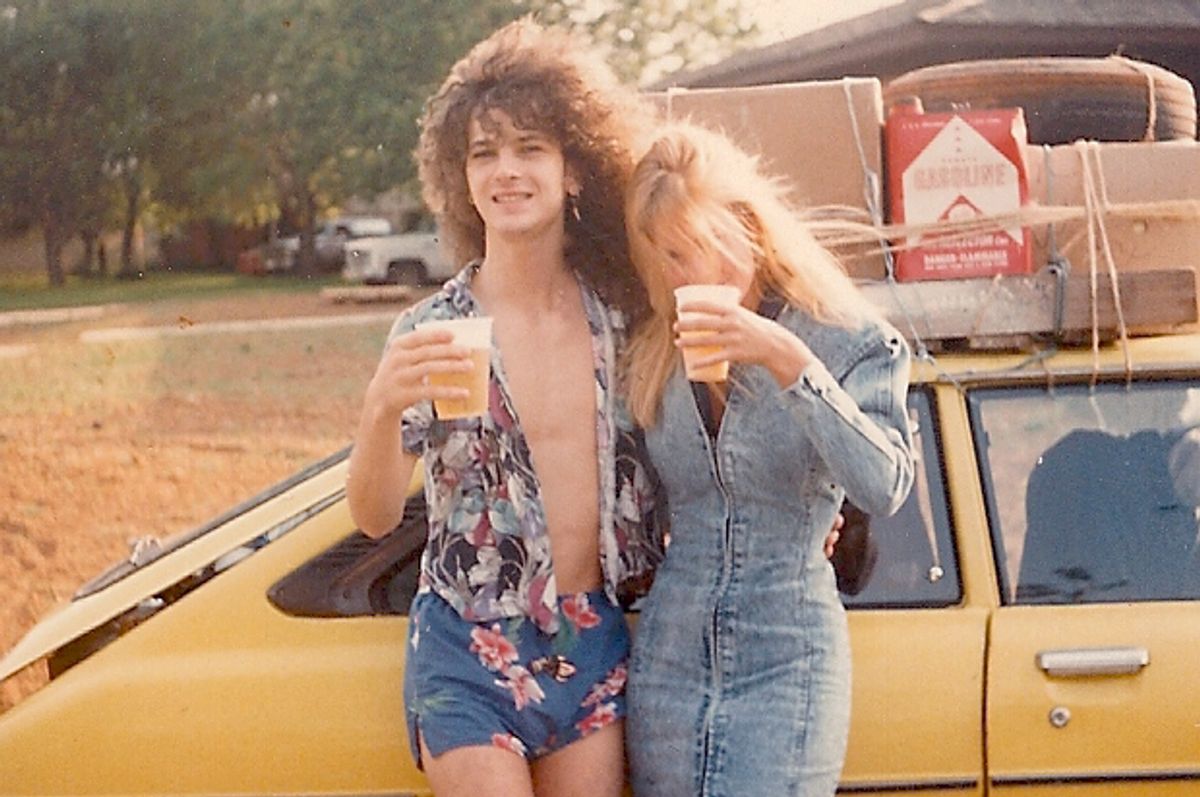 A photo of the author with Dimebag Darrell
--

In Hinduism, "upasana" is the word given for the practice of idol worship. It is a far cry from the Christian dogma of Exodus 20:3: “You shall have no other gods before me.”

Whether or not you confess to a belief in God — be it a big man in the sky with a long white beard or the divinity of Wordsworth’s “waters, rolling from their mountain-springs” — as Americans, the majority of us live in an unashamedly polytheistic landscape of reality TV stars and professional athletes on trial. Some of our idols are worthy of our attention, and some are not. Yet those who aspire to the title of “hero,” even within the realm of pop culture, dare to do what most of us cannot or will not do, because we lack the gift, or the courage. They charge toward an impossible brass ring that hangs above a moat full of hungry crocodiles. When they succeed, we succeed. Or at least that's how I felt about Dimebag Darrell.

Ten years ago, on the morning of Dec. 8, 2004, I drove my young son to his kindergarten, my mind awhirl at the thought of what lay in wait for me when I returned home: a mountain of index cards, stacks of books whose themes seemed at odds with one another, but the ideas from which were intent on lodging themselves in my brain and demanding closer inspection.

Although I’d entered graduate school to study theater history because I loved the literature of modern drama, I also suspected that there were some unresolved issues from my past — some lingering questions about my participation in the bacchanalian tradition of rock 'n' roll as a teenager. I was not a musician, and yet, having refused to sleep with strangers who were, I had failed to be a proper groupie. But there was little question that I was obsessed, and moved stealthily through this world for a number of years in the guise of a hot chick in a leather miniskirt. In reality, I considered myself an amateur anthropologist. Yet this distinction made me no less invested in the culture itself, and no less destroyed on this particular morning when my view of reality — and the world — would change forever.

As my son exited the car and waved goodbye, I smiled and turned on the radio but left the volume low while I continued to worry about the direction of my research.  I suddenly became aware of the fact that there was no music playing on the radio. A male DJ was talking, but not in the lighthearted, peppy way that typifies the morning drive time. His tone was serious enough that I raised my metaphorical antenna just in time to hear him utter the name of someone I knew. The gist of it was this: a man with a gun had interrupted a rock concert. The synapses in my brain were ablaze, and I was prematurely grateful that people I knew personally had survived a close call. Anything else was simply unimaginable. “… and fired point-blank at guitarist Dimebag Darrell …” millisecond processing now — he’s hurt, oh my God — ”and killed him."

The announcer’s voice reached my ear, as painfully distorted as the tracks on my collector’s edition gold vinyl copy of Projects in the Jungle — the Pantera album I’d absent-mindedly left in my car to melt during a typically scorching Texas summer in 1986. I do things now too ridiculous to believe. I am a perverse cartoon whose animation I cannot halt. The formerly reserved and sophisticated me does not shout, “No, no, no!” repeatedly like some histrionic character from a soap opera. She does not look at the radio dial like a woman possessed, damning this plastic knob as if it were the devil himself. She would never press her head up against the car window while sobbing endlessly, totally abandoning any regard for social convention, never stopping to wonder what this could possibly look like to the casual observer, no … she would be too embarrassed to do such a thing … if she were in her right mind. But she is not in her right mind, and I am hovering above her now, watching her come undone.

I’m not even sure how I made it safely home that morning. Stumbling, fumbling, cursing, racing breathlessly toward my landlocked phone, I picked up the receiver and could tell immediately that I had voice mail. “Good news always sleeps til noon.” In the single hour I’d been gone, and at not yet 9 a.m., I’d managed to collect several messages, some from people I hadn’t heard from in years. One was crying so profusely he could barely be understood, another delivered the news as irreverently as a gossip columnist, and still another sweetly addressed me as if I were 8 years old and had just lost my puppy. That afternoon I had planned to go shopping with my grandmother. When I called to cancel, her response was one that I became so fearful of in the months that followed, that I often willfully failed to mention that I’d known Darrell when the event was discussed in public. My grandmother meant well, but her words stung. “Well, honey, you really didn’t know him that well, did you?”

Her words were a stake driven right through my heart, because she was right. I hadn’t. He was not quite a friend, and yet he was more than a mere acquaintance. A “hometown” hero whose very existence gave weight to the definition of realized hope, he was a symbol of the limitless possibilities of youth.

I spoke with him on the phone before I ever actually met him. It was October 1986, and I had lived all of my 18 years in Houston. The previous year I’d started sneaking into a club called Cardi’s, where I’d befriended a wildly amusing barback who went by the name of Henry Rockballs. One day, Henry called me at my tanning salon job in a panic, asking if his friends from Dallas could use my credit card to secure a room at a hotel across the street from Cardi’s. The club refused to give them an advance, and no one had any money. I had to check my head for a moment and assure myself that this was not the Hyatt on Sunset and, indeed, Darrell had been rushed to the phone to quell my fears and promise that no TVs would be hurled through hotel windows. As it turned out, they paid their bill promptly the next day, and my father — a Houston cop who also happened to be the primary account holder of said card — was none the wiser.

Between the years of 1986 and 1990, I saw Darrell often enough that we could laugh about our shared experiences, like the time Henry shattered the front window of a mutual friend’s car while attempting to one-up Darrell, an early (and probably unintentional) practitioner of parkour. Nearly every female on the scene was a stripper, including my friend T.J. She and I started making regular trips to Fort Worth to see Pantera play in this tiny dive out in the middle of nowhere called Joe’s Garage. It was as if we’d made our way to some remote nuclear testing site, and when we returned home, shaken and dazed from the impact, no one really understood what we’d been through. This feeling of mutual religious ecstasy was the very bedrock of my friendship with T.J., and we were delirious initiates, led to worship at the altar of Randall stacks by a 20-year-old with a badass Tony Alva afro named Diamond Darrell. This was, of course, his original nom de guitare.

One night as I watched the band’s set from backstage at another Fort Worth club — Savvy’s — Darrell left the stage entirely and came to play his guitar solo directly in front of me, inches away. With his trademark Dean ML wedged between my knees, arching his back as the notes reached higher and higher, the Richter magnitude of this erotic episode clocked in at 11. Now, I realize this type of private performance was not an honor he reserved just for me, but it didn’t stop me from feeling like Donna Dixon’s character in the Foxy Lady scene from "Wayne’s World," my flaxen hair blowing back from my face in cheesy slo-mo.

I visited Darrell’s family home a couple of times, but even though he and his brother Vinnie were virtually unknown outside our little circle then, I sensed at the time that what I was experiencing then was rich with privileged information. I knew when I waited in Carolyn Abbott’s modest Arlington living room, gazing upon the portraits of her little sons, Darrell Lance and Vincent Paul, with their oiled and neatly combed hair and plaid bow ties — the double frame propped up on a table next to a large panther statue — that I should remember these details, and remember them well.

In 1987, Henry moved to California and after another bad club experience in Houston, this time at the Rock Zone, Pantera declared they would never play in Space City again. The following year, when the band’s independently produced album “Power Metal” was released, my friends and I began to wonder how in the world we would ever get to hear it. We finally decided that I had no choice but to simply call Darrell up at his studio and ask him about it. And this was how it came to pass that my mother would write a check for $40 to Darrell’s father, and the most rudimentary of record distribution deals transpired between two suburban parents. This transaction was, perhaps, the most telling of all our interactions.

Although we were youngsters who’d cavorted on the same playgrounds — sharing a deep connection to a bombastic and critically loathed musical genre — at the end of the day our relationship could never be equal. His role was to produce, and mine: to consume.

As we have seen, sometimes this artist-consumer relationship becomes dangerously parasitic.  In our efforts to court the divine, merely gazing upon our idols becomes unsatisfactory. For the deranged and schizophrenic, it can — quite obviously — lead to the worst possible end. For most of us, though, it just means making fools of ourselves.

I wish I could say I’d been above all this, but my fevered adolescent yearning to own the object of my affection truly knew no bounds. I wrote on his mirror in lipstick. I made an enormous drawing of him that I gave to his mother. I sent anonymous cards professing my undying devotion, all the while concocting an elaborate plan to have the cards mailed by friends all over the country so they would each have a different postmark. Oh, the mysterious romance of a bygone era — hinged on the promise of anonymity.

Imagine my surprise when, six months after the Great Stationer’s Onslaught, I met a guy at a club who, after a five-minute conversation about nothing in particular, positively ID’d me as “the girl who sends all those cards to Dime.” Of course. Because there’s clearly no more direct line to a future rock star’s heart than paper products covered with pictures of kittens. As it happened, Darrell wasn’t really in the market for a girlfriend, and the world is lucky he had Rita Haney instead of me. My emotional vampirism would have distracted him from the work he was clearly put on this earth to do. So, no, I didn't know Dimebag Darrell that well. But I do know that Darrell Abbott lived more at 16 than many of us do in a lifetime.