Make this monster pay a price: Why we needed to hear from Dick Cheney one last time

He's the horrible face of American torture. Here's why Cheney's defense of his war crimes was important to record 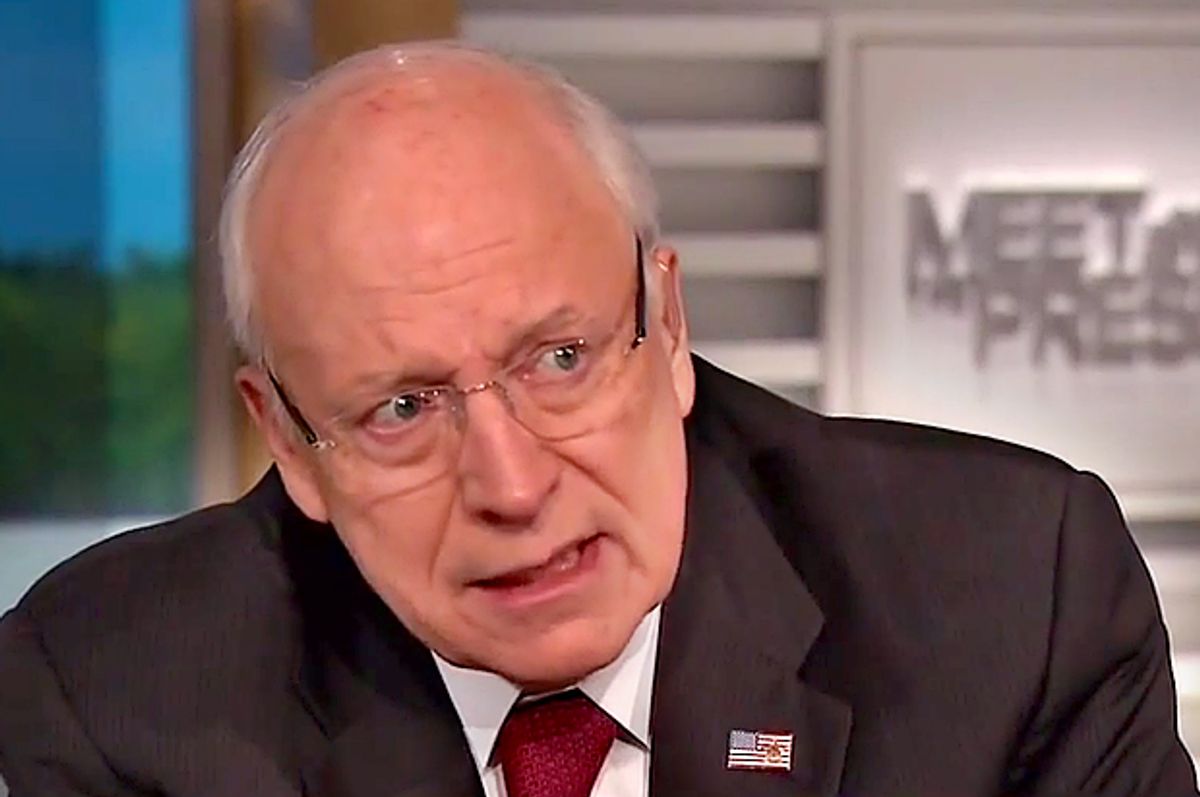 Former Vice President Dick Cheney’s time is about up, in many senses. For a Republican Party trying to look forward, he shouldn’t be a go-to voice for the media on national security policy. His sneering attacks on President Obama aren’t news anymore. The man who famously said, “It’s my new heart, not someone else’s old heart,” about the donor to his taxpayer-funded heart transplant should have lost the power to shock us by now. Unless he has a sudden attack of conscience, and apologizes for his career, he has nothing to say worth hearing.

Except on the Senate Intelligence Committee’s torture report. There’s been some anger on the left that Cheney took his seat yet again on NBC’s “Meet the Press” on Sunday, but I think he belonged there, one last time. Let the American people hear from the man who claims that interrogation methods we prosecuted after World War II, as well as others even more depraved, aren’t actually torture.

Cheney is such a monster that he couldn’t even keep himself from defending “rectal feeding.” While he acknowledged that it “was not one of the techniques that was approved,” he sanctioned it nonetheless. “I believe it was done for medical reasons. … It wasn’t torture in terms of it wasn't part of the program.”

That would seem to imply that anything that was “part of the program” was torture, which of course Cheney denies.

Ironically, earlier on Fox News Cheney said, "I don't know anything about” rectal feeding or rectal rehydration (he may well have been lying). But by the time he got to "MTP," he wasn’t willing to let any torture method go undefended. And even host Chuck Todd noting that “the medical community has said there is no medical reason to do this” didn’t shame him.

Todd asked Cheney some tough questions about U.S. prosecution of Japanese officials who waterboarded Americans, about the fact that at least a quarter of the detainees were innocent and, of course, about rectal feeding. Unfortunately, Cheney either dodged or lied.

Their exchange about innocent detainees showed Cheney at his most sociopathic:

CHENEY: Where are you going to draw the line, Chuck? How are --

TODD: Is that too high? You're okay with that margin for error?

“I have no problem” if 25 percent of the people we detained and potentially tortured were innocent. Take that in. It's the same mentality that leads to police shooting unarmed black men in the name of public safety. But it squares with Cheney’s famous “one percent doctrine” that governed the aftermath to 9/11: If there’s even 1 percent chance that terrorists might have a weapon of mass destruction, the U.S. should act as if it’s a certainty, and do whatever it takes to stop them.

It also squares with Cheney telling Larry King, about his lifesaving heart donor, “I don’t spend time wondering who had it, what they’d done, what kind of person.”

America’s torture architect got a new heart, but he can never get a soul. Americans needed to see that display of authoritarian arrogance on Sunday. But now let's hope he goes away.