Mom's tossing everything, including me

My mother is an "anti-hoarder," who obsessively rids her house of any clutter. Who knew I'd be next? 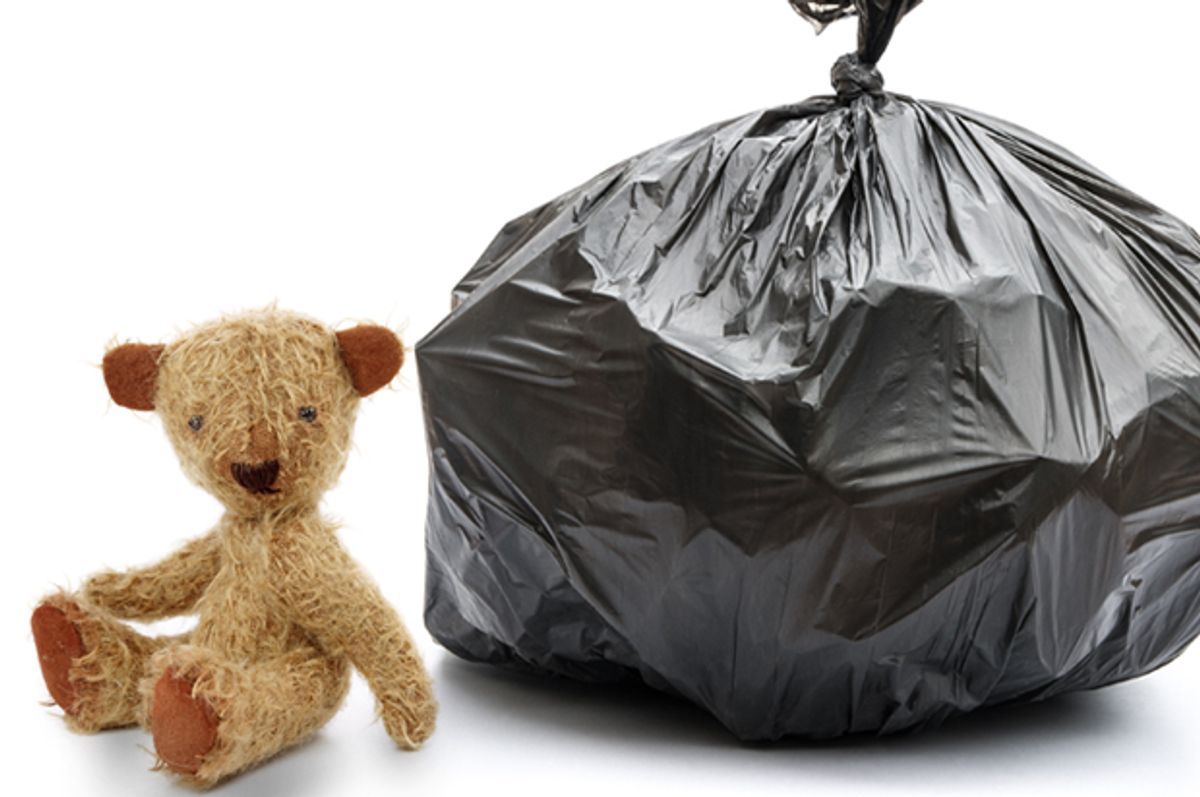 “Five dollars,” my mother says to the man wearing a hat with a clover leaf on it. She’s referring to the box springs, mattress and frame that are lying in the middle of our driveway.

“All, but get them out of here by dusk!”

Wasting no time, and knowing that he’s getting a bargain, the man slaps his $5 bill down on the sales counter/card table causing it to sway. He then continues on to the bed and starts dragging the mattress out to his car.

I’m standing a few feet away from this transaction with my mouth open. I’m 17 and can’t fully comprehend that my mother has just sold my bed — the bed I’m still using. I can’t think of any rational reason for her to get rid of it. The bed isn’t damaged or falling apart, nor is it infested with bedbugs or fleas. In fact, it could probably last at least another decade, but its presence in our house adds to my mother’s anxiety and must be removed. Her purging has started to escalate and now includes almost everything, including personal items that belong to my father, my brother and me.

“Mom, what am I going to sleep on?” I interrupt her as she changes the price tag on a green and yellow tray from $5 to $1 in her wild everything must go fever. What doesn’t sell will be immediately donated to the Goodwill.

“I’ll bring the chaise longue in from the backyard. It’s very comfortable. You can sleep on that.”

The chaise longue has been outside for years and has weathered rain, dust and, worst of all, pee from cats, raccoons and possums. It stinks. She’s clearly not thinking straight right now and it’s scary to witness her frenzy. I tell myself to stay calm and not take my mother’s mania personally, but my heart is beating too quickly and my face feels flush.

Now, all these years later, if you were to walk into my mother’s house, the sound of your footsteps would echo throughout. There’s not much left in there to absorb the sound. Some of her rooms look as if someone has very recently moved in, or out, with the only touch of color being a vase of lemon leaves.

My mother isn’t a hoarder; she’s the exact opposite. If she were a hoarder, then people would understand when I talked about her. They’d have the exact image: a house with stacks of newspapers and magazines touching the ceilings, bags of junk covering the floors, and old food rotting in the least likely of places. We’ve all seen hoarders and their homes on the various hoarder TV shows. But there aren’t any reality shows about people who have deliberately empty rooms. When people come to my mother’s house, they can’t comprehend that anyone would make a choice to live so sparingly.

She’s been called an “anti-hoarder,” “clutter-phobic” or someone who suffers from “obsessive compulsive spartanism,” but these aren’t the official names of this condition. As far as I know, there are none. The American Psychiatric Association hasn’t declared it a psychiatric disorder yet. Whatever it’s called, it’s a form of OCD and I suspect a growing number of people have it.

I’ve been affected in many ways by my mother’s constant purging; I have a tendency to hold on to things and people a little tighter. It’s becoming increasingly more difficult for me to throw things out, especially if she’s given them to me. If I can’t have my mother’s affection and attention, then I want that paisley scarf that still smells of her perfume or the absurdly old-fashioned drinks cart. I hang on to my mother’s castoffs as I try to hang on to her.

I visit my mother at least twice a year and call her fairly often. Every time I’ve visited, I’ve brought home carloads full of things she’s purged. I’m becoming a hoarder with everything my mother doesn’t want. I can’t get rid of the colored cut-crystal wineglasses my parents received as wedding gifts. I don’t drink and I’d never let anyone else use them but somebody needs to have that reminder of when my parents were just starting their lives together.

My mother hasn’t always been this way. When I was a small child, she and her friends would go searching for treasures in thrift stores, auction houses and garage sales. Our house was completely furnished with couches, rugs and knickknacks. I felt secure when we had dinner service for 10, spare towels and candles that burned giving off a warm, welcoming glow.

I don’t know exactly what the trigger was, or why she began to feel trapped and tied down by her things, but I have a suspicion about her anti-hoarder origins.

My mother was very unhappy with her life when I was growing up and didn’t try to hide it. She was cold to my father, sharp to my brother and distant with me. If she came with me to my swimming lessons, she’d sit far away from the pool reading her book and missing whatever I wanted to show her, even when I called out, “Mom, look at me,” over and over again.

My parents had separate bedrooms and when I was still in high school, my mother started being very secretive with her phone calls. I’d ask to say hello to whichever friend she was supposedly talking to and she’d refuse, closing the door on me. One day she announced that she was going to Chicago, saying she’d never been there and wanted to see what it was like. I learned the truth when she called me crying (the only time we’d shared anything intimate from our lives) that she had been reunited with an old beau and had hoped to begin a new life with him. When he refused to leave his wife, she came back home. As she was stuck with us, she began purging her life of the things she could toss.

Finally, my parents divorced when I was in college. My father passed away a few years after the divorce, and my brother died two years after my father. I moved to L.A. With no one to tie her down, my mother returned to the small town on the Sacramento Delta where she had grown up and began living with as few possessions as possible. She still lives there and sometimes jokes about how easy it will be to clear out her house after she’s dead.

I have more things in my office than my mother has in her entire house. Imagine living somewhere where there weren’t the basic comforts: no fans in the hot summer, no toaster, no blender, no tea kettle, no streaming, no Internet, no pots, no pans and no hair dryers. It’s indoor camping without the benefit of beautiful scenery. But I’m hesitant to bring any of my creature comforts to her house as it will just cause her additional anxiety and make her lash out at anyone in arm’s length.

“I don’t believe in family,” my mother will say, surrounded by her great-grandchildren, grandchildren and me, all of us standing, as she doesn’t have enough seating for a group.

An inventory of my mother’s household furniture would be a short one: one bed, three lamps, two small tables and three chairs that can be used indoors or outside.  An inventory of the people that my mother seems to care about appears to be getting even smaller.

A few months ago, my mother said, “I want to close our relationship,” as if she was simply closing her bank account. I wasn’t surprised. I’ve been expecting her to try to cut me completely out of her life for a while. As she’s gotten rid of most her belongings, it was only a matter of time before she started in on eliminating the people from her life. She’s written letters to longtime friends alerting them of her decision to disconnect and she has gone through times where she simply stopped talking to my sister-in-law and other family members.

I refused to simply walk away from my mother and tried to make a case proving that I’m a good daughter. As evidence of my value I reminded her that I’m the only one who ever gives her gifts she actually likes, items that have a practical use like jam or stamps. I brought up how she loves it when I cook and transport the entire Thanksgiving meal to her house 300 miles away, and take back with me the dozen or so meal containers. I leave no trace that either the food or I had ever been in her house. But these must not be reason enough for her to hang on to me, so out I go like the old family photos or extra forks, and by extra I mean more than two. It’s impressive how little attachment or sentiment she has for anything, or anyone, without fur.

A love of animals is something my mother and I share. It’s the one secret weapon I can use to stay in contact with my mother. I have two inside cats, and some feral cats that live outside. My mother expects me to take her five cats and dog after she’s gone, and I will honor her wishes.

I wish I could be one of those people who can disconnect from their parents, but I’m not.

My mother can try, but the truth is she’ll never be able to get rid of me. I’m not a cheap vase full of wilted flowers where you can just dump the entire thing into the trash. I’m her closest blood relative, and family isn’t clutter. I will not be tossed out, given away, returned to where I came from. I will fill the mostly empty rooms with my presence.

I’ll have a mini sit-in, even if I have to bring my own chair.

Christine Schoenwald is a writer living in Southern California. She's had pieces in the L.A. Times, XoJane and YourTango. Christine is a Pushcart Prize nominee.