Nicki Minaj's earnest new album: The most un-"Nicki Minaj" moments on "The Pinkprint"

Minaj's latest album, released this weekend, flips her wacky image with a dose of heartbreak and vulnerability 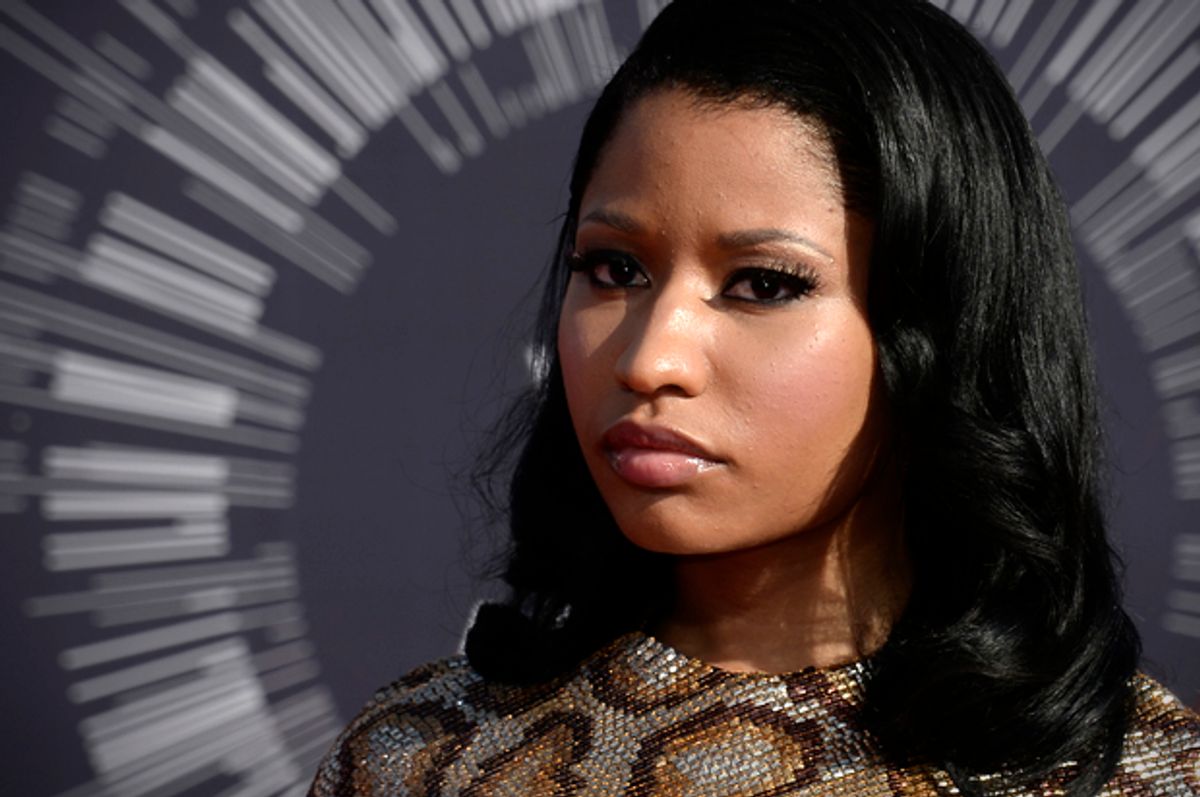 The sensitive moments on Nicki Minaj’s “The Pinkprint” might surprise fans who came to her through the sassy swagger of “Beez in the Trap” and the delightful vulgarity of “Boss Ass Bitch" and expected more of the same after she previewed the album with "Anaconda" over the summer. But Minaj has cultivated a pop counterpoint to her harder image. With several piano ballads and a heavy dose of introspection, “The Pinkprint” is full of moments of surprising vulnerability.

The album opens not with a brag track but with a lament for the fragility of life and the fleeting nature of time. In “All Things Go,” Minaj drops personal revelations one after another, including a teenage relationship that led to an abortion. The confession of survivor’s guilt she feels over a murdered cousin is particularly haunting, as is her attempt to self-medicate her grief: “I get it, it was all me. I pop a pill and remember the look in his eyes, the last day he saw me.”

On a lighter but even more relatable note in “All Things Go” are her future plans for marriage and children (“as long as seven years from now, I’m taking my daughter to preschool”) that could foreshadow Minaj’s entrée into all-around celebrity lifestyle guru territory. Like a Goop we wouldn’t hate-read.

Minaj’s pop-friendly duet with singer/songwriter Skylar Grey, “Bed of Lies,” is a strong candidate for a lasting break-up anthem, full of regret over the energy she spent on an unworthy lover. She pairs Grey’s piano and prettily plaintive chorus with a mix of familiar break-up clichés and her own inventive lyrics: “Couldn't believe that I was home alone contemplating / Overdosin', no more coastin', no more toastin' over oceans / They say you don't know what you got 'til it's gone / They say that your darkest hour comes before your dawn.” In “Pills N Potions,” Minaj's rap verses brim with a backlog of hurt, juxtaposed against her dreamy crooned refrain of “We’re overdosing / I’m angry.” In the soulful chorus, though, she repeats, “I still love” over and over, like a mantra.

Her album closer, the ballad “Grand Piano,” goes even further into letting the world see Minaj’s hurt, and instead of polishing her tough shell, she throws out a defiant, “The people are talking, the people are saying / That you have been playing my heart like a grand piano / So play on, play on, play on.”

But the album isn’t all all heartbreak. In “I Lied,” Minaj explores the risks of vulnerability in an ode to moving cautiously into romance. Rather than rebuff her suitor for not being in her league, she ponders “what happens if I fall in love, then you cut me loose?” Fans of the more outrageous versions of Minaj, don’t worry—she also warns him that she’ll “be smashing windows and cutting them breaklines” if he breaks her heart.

Minaj shows her lovable side in “Favorite,” detailing the very down-to-earth goals of a well-rounded relationship where she can be a “wife, be a friend / be a teacher and a fan too.” This relationship comes with a lot of fancy bags, but (she swears) no baggage: “Get locked, Imma write ya / You on the road? Imma Skype ya.” She also plays with the rumors that she and Meek Mill are more than friends on their collaboration “Buy a Heart.” Minaj teases listeners with a classic conundrum about taking a friendship to the next level: “It’s too much, and it’s too clutch / Who wants rumors of the two of us? / But when you're away, I can't get you out of my mind / But what if I met the one and you’re wasting your time?”

The most surprising moment on Minaj’s album is when she reaches into her bottomless bag of lyrical tricks and pulls out the bright-eyed party anthem “The Night Is Still Young,” (“and so are we!”) that’s practically Taylor Swiftian in its youthful optimism: “Make sure the stars is what you aim for / Make mistakes though.”

For fans looking for evidence that the swaggering Minaj hasn’t shed her lyrical armor, fear not. Beyond what we’ve already heard on “Anaconda” and “Only,” where she presides over the boys’ choir of Li’l Wayne, Drake and Chris Brown with her quirky sense of humor on full display (“Yeah, that was a setup / For a punchline on duct tape”), there’s her irresistibly catchy masturbation anthem featuring Beyoncé, “Feeling’ Myself,” and the upbeat reggaeton-inflected “Trini Dem Girls,” featuring the mysterious Lunchmoney Lewis. Minaj’s simmering duet with Ariana Grande “Get On Your Knees” is further proof that her tongue is still planted firmly in cheek when it comes to her love life. All the heartbreak in the world can’t stop a line like “got a bow on my panties because my ass is a present.”