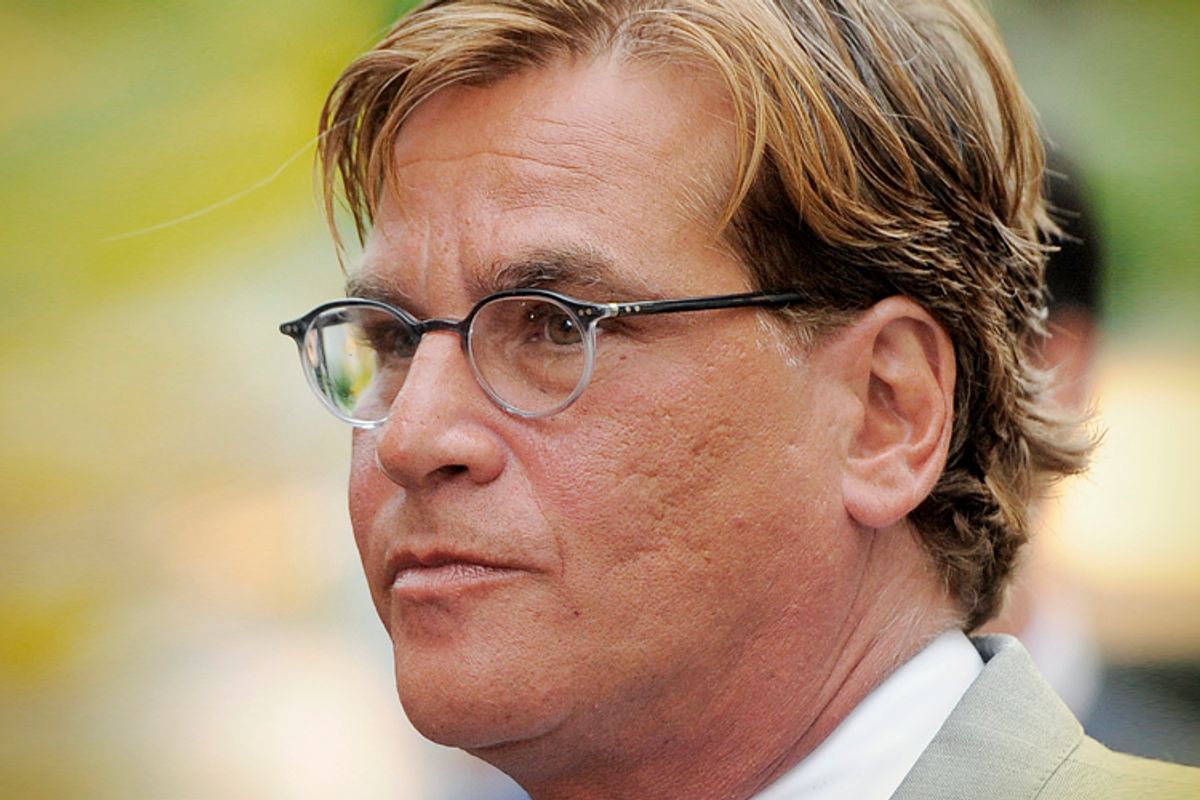 Let us stipulate that, if a Seth Rogen and James Franco movie can arouse a world leader’s anger and thus provoke a major cyberattack, the world has officially gone batshit crazy.

Now what do we do?

According to Aaron Sorkin, we pretend parts of it never happened. Sorkin’s essay in the New York Times dripped with a special blend of self-regarding and intellectually masturbatory falseness about journalism that I recognized from somewhere. But where? I know! “The Newsroom” – Sorkin’s nearly unwatchable and deeply fictional HBO show about news, as he would have it be.

Sorkin’s central argument – that the material from the Sony hacks is irreparably tainted fruit – was made more cogently and, somehow, without bullying by Emily Yoshida of Verge.

A man stuffed with paradoxes, Sorkin is one of modernity’s most gifted phrase-turners and a person given to occasional bouts of very bad writing. Quite often, when good writers write gracelessly, they are trying to sell us on a meretricious concept. Here, we have that in all four suits:

“As a screenwriter in Hollywood who’s only two generations removed from probably being blacklisted, I’m not crazy about Americans calling other Americans un-American, so let’s just say that every news outlet that did the bidding of the Guardians of Peace is morally treasonous and spectacularly dishonorable.”

Wow. Any other contenders for worst paragraph published anywhere in 2014 or can we just handle this by acclamation?

Let’s start with the first clause. Are you saying that you’re so edgy and principled and gifted that only an accident of birth kept you from being Dalton Trumbo? You don’t get to claim that about yourself until you’ve faced down hostile fire. Elia Kazan and Budd Schulberg probably thought they were stand-up guys too, until they weren’t.

Let’s press on. You’re not crazy about calling people un-American. So why bring it up? Isn’t this a very old and stale trick? “I’m not going to call Aaron Sorkin an oily narcissist because not that’s not how I roll,” etc.

Last stop: “morally treasonous” to “do the bidding” of the hackers.

I’m not really sure what the first phrase means. Treason is typically an act against a country, not against an abstract moral code. This might be a case of a writer putting two strong words together and hoping they add up to something.

“Doing the bidding” may be the crux of this whole argument. Yoshida is more lucid about this. Somebody loathsome smashed the piñata for dubious reasons. Does that mean you don’t pick up any of the candy?

Versions of that question had to be weighed seriously by more serious persons than Sorkin in the document dumps by Chelsea Manning and Edward Snowden. There was more on the line – the freedom, safety and even the lives of people all over the world – than a bunch of movie executives doing spit takes with their lattes. But journalists concluded that a) one need not share the precise motives and goals of Manning, Snowden or Assange in order to make curated use of information they provided and b) the fact that the information was “stolen” was not a good enough reason to quash it.

Ah, says Sorkin, but that information was newsworthy. When people call items in the Sony dump newsworthy, Sorkin quotes Inigo Montoya to them: “You keep using that word. I do not think it means what you think it means.”

Eh tu, Inigo? I think it’s newsworthy if Maureen Dowd, the New York Times’ highly decorated columnist – whose work appears in the same space where Sorkin was published – quite possibly provided the rich and powerful an advance peek at her column. (Dowd says she didn't, but the emails offer a different interpretation.)

I think it’s newsworthy if rich and powerful media executives joke among themselves in a very reductive way about the supposedly race-based movie preferences of President Obama (and with a rapier wit surpassed only by any reasonably mordant middle-school kid).

And any revelation of pay inequality between actors and actresses strikes me as the beginning of an interesting (and newsworthy) conversation.

At a more basic level, any document dump beckons to a basic reportorial instinct. Everybody we deal with – politicians, cops, big media empires -- wants to show us the stage-managed version. We want to see what came before that, what happened when they thought no one was looking.

Nobody should know the power of this better than Sorkin. Has anybody ever appealed more skillfully to our thirst for glimpses behind the curtain? His career is all about showing us what it might be really like at ESPN or “Saturday Night Live” or the White House or CNN. One of his central fictional premises is that, in these places, there are both persons of virtue and hypocritical vipers and that we should strive to know the difference.

What a great idea, and – even though I can’t stand “The Newsroom” -- I’ve loved every other thing he’s done (except “Studio 60 on the Sunset Strip”). I even looked at his 2012 Syracuse graduation speech to see if there was something I could throw in his face, but I wound up sucked back into what a candid and compelling speech it is. He does not, however, understand journalism.

Here’s the thing about journalism. It’s messy. There’s breakage. The good practitioners try to keep that to a minimum, but we’ll never get it down to zero. I once worked for a newspaper editor and publisher with whom I had absolutely no rapport. In our years together, he said exactly one thing that made any sense to me: “We’re not in the business of knowing stuff that we don’t tell people.” The corollary: We don’t need a good reason to tell people something. We need an extremely good reason when we don’t.

I think about that at least once a week. Journalism isn’t dentistry. We can’t advertise painless treatment, because it’s not what we do.

But as the Man in Black says: “Life is pain, Highness. Anybody who says different is selling something.”

Two can play at the “Princess Bride” game.