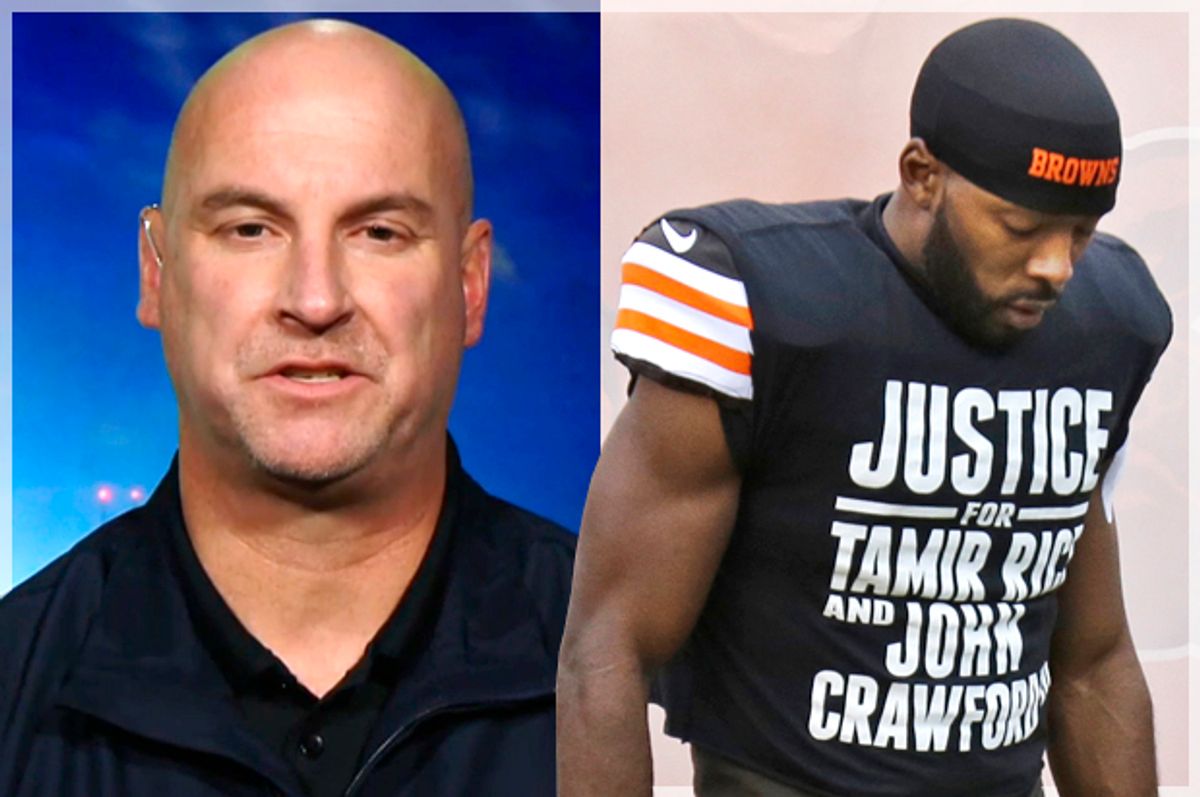 Tired of the Bill of Rights? Cleveland police union chief Jeffrey Follmer has an elegant alternative:

Follmer is demanding an apology from the Cleveland Browns’ Andrew Hawkins, who wore a “Justice for Tamir Rice and John Crawford” shirt on Sunday. He laid out his authoritarian solution to the epidemic of cops killing unarmed black men in an interview with MSNBC’s Ari Melber Monday night.

The clash between Follmer and Hawkins perfectly encapsulates the rival worldviews leading to rising unrest over police abuse – and when you listen to the two men, it’s clear who has the better argument.

Hawkins explained why he wore the shirt in an eloquent, six-minute statement to reporters Monday that was so moving you’d have to be dead – or maybe Rudy Giuliani – not to be moved. You should watch the whole thing, but it’s here that he chokes up:

I have a 2-year-old little boy….That little boy is my entire world. And the No. 1 reason for me wearing the T-shirt was the thought of what happened to Tamir Rice happening to my little Austin scares the living hell out of me. And my heart was broken for the parents of Tamir and John Crawford knowing they had to live that nightmare of a reality.

Melber played that clip, and turned to Follmer, who responded without any hint of humanity. “He disrespected police officers who were doing their job,” the POA head insisted, as he wouldn’t even concede that 12-year-old Tamir Rice, who carried a toy gun, was unarmed.

“It depends what you’re saying’s unarmed,” he told Melber. “They thought him to be 20 years old.” To Follmer, a horrific video that shows police driving up to Rice in a park and shooting him within seconds, in fact vindicates the officers. “The video shows they were justified,” Follmer insisted.

Another day, another authoritarian running amok.

Follmer’s histrionics follow the St. Louis police union’s demand for an apology from Rams players for wearing T-shirts protesting the killing of Mike Brown. It’s another example of police officers aggressively demanding to be unaccountable for excessive force – to shoot first and ask questions later, even when their target is a child or a young man (in Crawford’s case) with a toy gun.

When Melber rightly observed that Follmer’s attitude would seem to mean he thinks civilians can’t criticize police, he disagreed. “It shouldn’t be talked about on a football field where we are supporting the Browns by doing security,” he explained -- as if police officers patrol NFL stadiums as volunteer work, out of the kindness of their hearts, rather than being paid for it.

My mom taught me my entire life to respect law enforcement. I have family, close friends that are incredible police officers and I tell them all the time how they are much braver than me for it. So my wearing a T-shirt wasn't a stance against every police officer or every police department. My wearing the T-shirt was a stance against wrong individuals doing the wrong thing for the wrong reasons to innocent people.

But for Follmer, there's no such thing as cops "doing the wrong thing for the wrong reasons to innocent people." Like the St. Louis police union, and Rudy Giuliani, Follmer is attempting to thwart all criticism and civilian oversight. Whether facing a child with a toy gun, or an interviewer, the approach is the same: Don’t back down. Admit no doubt. Show no humanity. It’s Dick Cheney insisting it doesn’t matter if a quarter of the prisoners we detained and tortured were innocent men.

Follmer seems to share Bill O’Reilly’s view, that athletes “aren’t smart enough” to weigh in on such weighty matters. “It’s pretty pathetic when athletes think they know the law,” Follmer said when he first demanded the apology.

But honestly, contrast Hawkins’ statement with Follmer’s, and tell me which man knows the law.

And here's Follmer on MSNBC: