Frank Bruni's "Bush worship" is back: Why this Times scribe must not cover Jeb 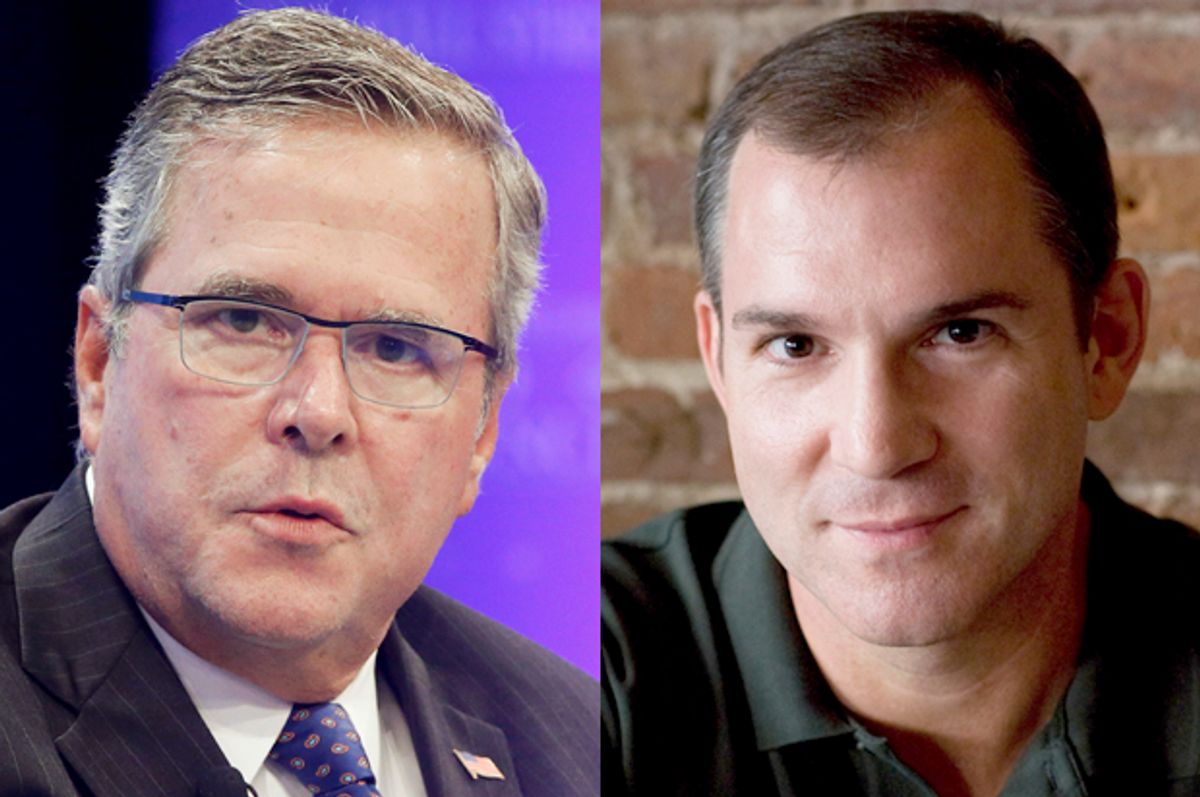 After Dick Cheney's astonishing performance last week in which he not only defended torture he said he would "do it again in a minute," it's a little bit hard to believe that the entire political establishment seems to think it's completely reasonable that America would have yet another Bush restoration. No matter what they do, they just can't quit the Bushes.

Lord knows the political media is drooling at the prospect of Jeb Bush throwing on the old epaulets and ermine robes and getting the family back into the presidentin' business. But none seems to be more thrilled by the news than the New York Times' Frank Bruni:

[H]e learned between his 1994 defeat and 1998 victory to reach out to minorities and speak inclusively and hopefully. When he recently told an audience in Washington that a person had to be willing to lose the Republican primary to win the general election, he was in part alluding to that lesson, and he was telegraphing the tone that a Bush campaign would take. He was also signaling a suspicion of labels and boxes.

Why, he sounds downright loveable. Of course, Bruni has a long history with the Bush family, having been on the campaign trail with "W" back in 2000 and delivering some of the most glowing coverage any presidential candidate has ever been privileged to receive, and often on the front page of the New York Times. And the affection was mutual. Eric Alterman recounted a story that perfectly illustrates the relationship:

Shortly after the 2000 election, Richard Wolffe, then a reporter for the Financial Times, summed up what went wrong in the coverage. “The Gore press corps is about how they didn’t like Gore, didn’t trust him. … over here, [on the Bush press plane], we were writing only about the trivial stuff because he charmed the pants off us.” The New York Times’s Frank Bruni, however, did not think he or his colleagues were to blame. Rather, the trivial nature of his work was apparently the fault of the voters. “Modern politics wasn’t just superficial because the politicians made it so,” he argued. “It was superficial because the voters let it be.”

Bush knew a good thing when he saw it. As a candidate, he put his arms around Bruni, whom he nicknamed “Panchito” Bruni, and cooed, “You know we love you.” Later, Bush looked across a crowded room at Bruni and mouthed, “I love you, man.” Bruni did not mention whether he told Bush that he loved him back, but in relationships as in literature, it is always better to show than to tell. Either way, Bush sure knew his man. Bruni went over to the Gore camp one day and found out, to his apparent horror, that Al Gore not only did not love him; he did not even bother to come up with a nonsensical nickname for the writer.

That campaign was notorious for such sophomoric coverage. Bruni wasn't the only practitioners, but he was among the most enthusiastic. And perhaps one of the reasons he was enthusiastic is best explained by his next job at the Times as a food critic: the Bush team just put on a better spread. Margaret Carlson spilled the beans in the pages of TIME Magazine, without even the tiniest bit of chagrin:

He routinely comes to the back of the plane to pinch cheeks and hand out nicknames. He asks about the budding romances of the reporters on board; his favorite scribes get their bald heads palmed. The care and feeding is four star. The last time I was on the plane, I had six meals--one featured lobster--over the course of three events, an excellent ratio. Sleep was plentiful, thanks to Bush's light schedule, which protects his naps, nights and weekends.

Such a genial host has the quiet effect of curbing pointed questions. Who wants to bring up politics, religion or money at a family dinner or when there are Dove Bars on demand?

The Gore campaign, by contrast, just didn't know how to treat a journalist right:

The regulars are treated like tourists on Aeroflot: on some days, the food is timely; on others you have to survive on fruit roll-ups and chicken-salad sandwiches past their sell-by date. The most reliable thing is courtesy Rolaids in the bathroom.

This was the professional journalism that brought you the torture twins, George W. Bush and Dick Cheney.

Bruni's column this week-end was ostensibly about how you just never know what a president is going to be like and ideology is an ever shifting concept that doesn't really explain much of anything. Jeb Bush was once considered more conservative than his brother and then it turned out that his brother was pretty conservative too. Now Jeb seems to be less conservative but that's only because a lot of people are very conservative. So who can say what these people will do?

One might think figuring that out would be a campaign reporter's job, but we certainly haven't seen a lot of that in recent years. Alterman put it best in his piece on Bruni when he wrote:

True, Bush was a hard-line conservative, and Bruni loved him. But his affection was laced with a profound lack of interest—one might fairly call it contempt—for the issues upon which Bush took up a position.

It's very hard to imagine that we would have this kind of superficial campaign coverage in such troubled times as we live now. Just the fact that the government using torture and a rash of police killing unarmed black men will be up for "debate" should be enough to sober up the campaign press corps. However, if the line-up end up being Hillary Clinton vs Jeb Bush or Elizabeth Warren vs Chris Christie or Rick Perry vs a snowball's chance in hell, or any of the possible combinations, the usual superficial reality show soap opera is almost inevitable. ("Duelling Dynasties" and "The Bros vs the Babes" come to mind as the ones most likely to make normal Americans want to stab at their ears with chopsticks.)

It doesn't have to be this way. If members of political the press corps can rouse themselves out of their Dove Bar comas long enough to do a little bit of digging, it won't be hard at all to see who the candidates really are, what they care about and what they want to do. But just in case they go back to their old ways, Democrats, I suggest you think ahead and get one of your top donors to engage a Top Chef to keep the press corps satisfied. Maybe hire a masseuse or a manicurist for the campaign plane as well. Or better yet, give them a massage yourself after a hard day and whisper sweet nothings into their ears. That's the only message they seem to be able to hear.