Joe Scarborough: Don't cover rape allegations unless there are charges

The “Morning Joe” host has something to learn about rape, reporting and our criminal justice system 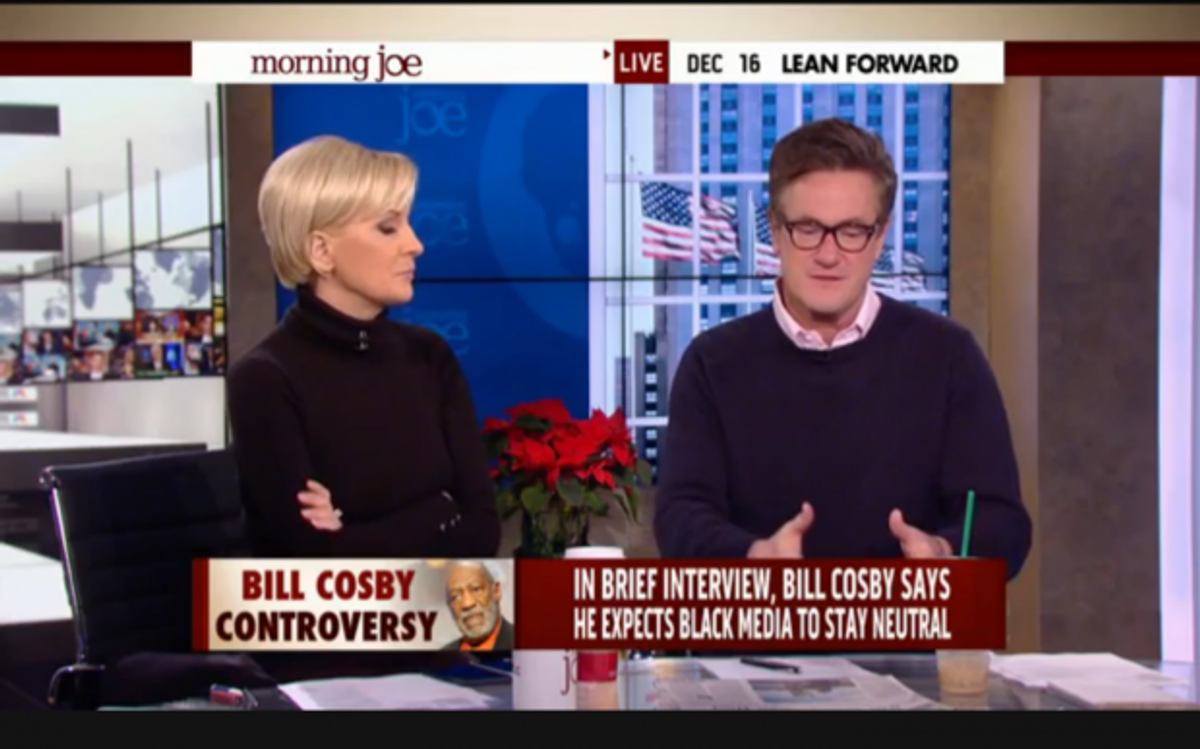 Joe Scarborough said Tuesday that the media shouldn’t report on the Bill Cosby rape allegations because the comedian was never charged with a crime.

“You ask why I didn’t talk more about this in the very beginning,” he said during a “Morning Joe” panel on the allegations that Cosby raped 19 women. “It’s very easy to accuse somebody of something. And it’s almost impossible to prove a negative in real time, much less 40 years later.” (What isn't being mentioned here, but is raised later in the segment by another panelist, is that Cosby faced a civil case that he settled on undisclosed terms after he was accused of rape less than a decade ago, though Scarborough seemed skeptical that this changed much about the allegations.)

Later in the segment, Scarborough said, “Bill Cosby has never been charged.”

When asked if the allegations should still be reported, he responded, “I don’t think we should.”

My first thought was that, no, actually, it’s not at all easy to “accuse somebody of something” when that somebody is a beloved cultural icon and that something is sexual assault. We punish victims who come forward about rape. A fact that many of these women are now intimately aware of as their characters and motives are questioned on an almost daily basis. Questioned, in fact, by men like Joe Scarborough.

“Any woman can come forward right now and say ‘Bill Cosby did this to me 40 years ago’ and be on the cover of US Weekly,” he said of the women who have come forward. “They will print your story. Maybe it happened. If it’s did, that’s tragic. But if it didn’t happen, you get your 15 minutes of fame.”

And to follow Scarborough’s journalistic guidelines -- no charges, no coverage -- would mean that something like 92 percent of rapes in this country would never be discussed in public. Only 10 percent of rapes lead to an arrest, only 8 percent are ever prosecuted and only 4 percent result in a felony conviction. The kind of media silence required by such a standard is absurd, it would amount to a virtual blackout. (I’d also be curious if Scarborough believes the same standard should apply to allegations of other crimes or if he reserves his “vetting” suspicions and questions about motive exclusively for victims of sexual assault.)

But I also wonder why it is that Scarborough still looks to the criminal justice system as a beacon of credibility. Isn't he paying attention?

We happen to know a lot about how that system “works” when it comes to sexual violence. Police tasked with investigating rape often treat victims like criminals, discard evidence, disregard testimony, allow untested rape kits to pile up in an unconscionable backlog that spans decades. The courts tasked with these cases have accused teenagers of being older than their “chronological age” and somehow culpable for their own rapes. Subjected victims to questioning that is both traumatizing and abusive. They have let rapists walk, again and again and again.

If Scarborough wants to wait for the process to run its course, for the system to "work," before he passes judgment or reports on these allegations, he will be waiting a very, very long time. He will also be looking the other way as victims are failed and ignored time and again.

For too long, the burden of our failed system and the task of rectifying the violence it condones and perpetuates were shouldered by too few. But that’s shifting, albeit slowly. The violence has become too glaring to ignore. Though some, clearly, will continue to try to do just that.