Based on Nino's moral reasoning, let's hope the issue of torture doesn't come before the Supreme Court anytime soon 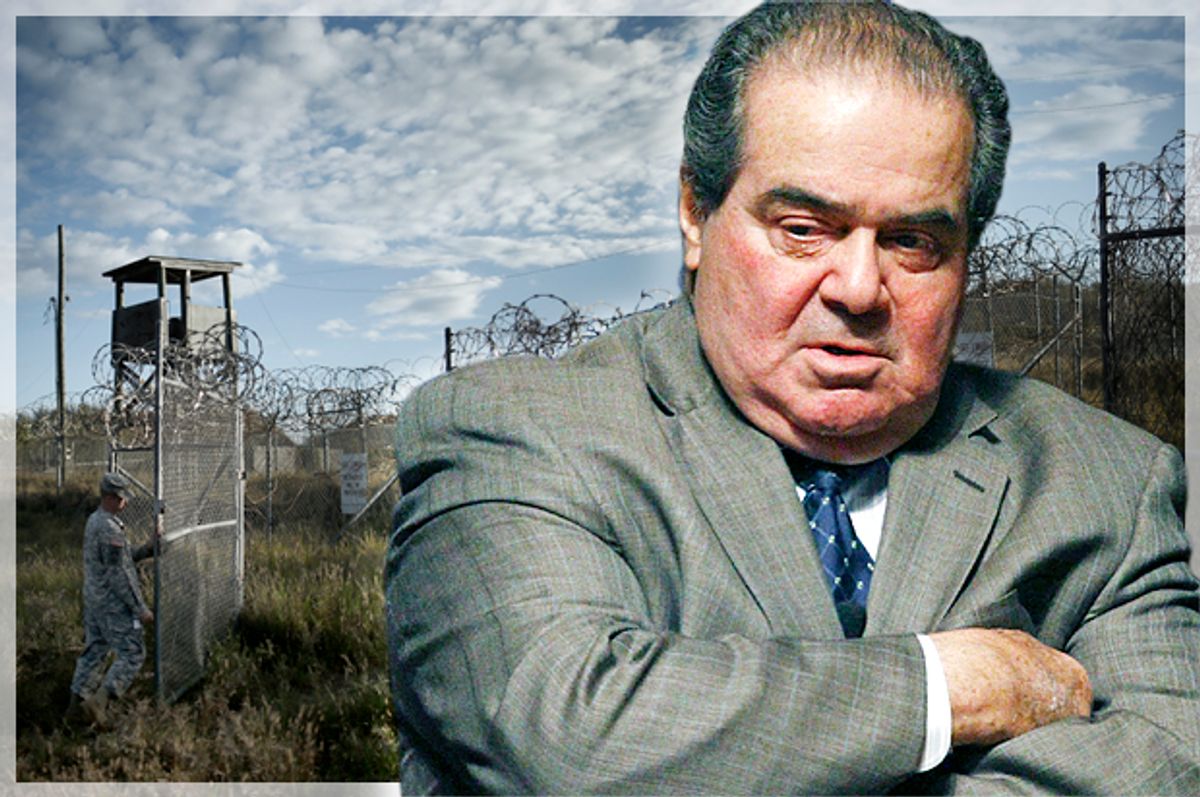 Supreme Court Justice Antonin Scalia cannot bring himself to say that torture is bad, having recently explained the following to Swiss National Radio:

I think it is very facile for people to say 'Oh, torture is terrible.’ You posit the situation where a person that you know for sure knows the location of a nuclear bomb that has been planted in Los Angeles and will kill millions of people...

You think it's an easy question? You think it's clear that you cannot use extreme measures to get that information out of that person?

That is not exactly a sparkling example of moral reasoning.  Sure, it is possible to conceive of an outlandish scenario in which the argument for torture becomes compelling – Would you do it to save 3 million lives?  What about saving 4 million lives and a puppy? – but that tells us virtually nothing about real-world situations involving actual human beings.  Scalia may not realize it, but he has committed the ab uno, disce omnes fallacy:  from one [imaginary] case, learn about every case.

The best that can be said for Scalia is that he has set up an extreme example of the famous Runaway Trolley Problem, first devised by Philippa Foot, in which philosophy students are asked whether they would pull a track switch that will save five innocent lives while killing an equally innocent bystander. As a thought experiment, the Trolley Problem can be used to explore the underpinnings of various moral intuitions, but no one would suggest that it is a meaningful guide for judicial decision making.

In any event, Scalia’s hypothesis is meaningless even on its own terms. It requires that the interrogators “know for sure” that their prisoner also “knows for sure” the location of a nuclear bomb.  Put aside the physical impossibility of transporting and concealing such a bomb at any time in the foreseeable future, and we are still left with the cognitive impossibility of absolute certainty about the prisoner and the supposed weapon.  Scalia solves this problem by assuming the conclusion. His fictional prisoner knows the location of the bomb, and the only challenge is to torture it out of him.  There is no place for uncertainty in Scalia’s world.

In the real world, however, the torturers begin their labors with only a hunch about the information to be gained from the prisoner, and they don’t stop until they are satisfied with the result. Even so, they do not know anything “for sure” when it is all over. Khalid Sheikh Mohammed was waterboarded 183 times. At what point did the interrogators figure out that the first 182 had not worked?

As it turns out, Scalia's great moral insight is derived from a television show, right down to the geographic details.  In Season 2 of the series “24,” the fictional FBI agent Jack Bauer saved Los Angeles by forcing a terrorist to reveal the location of a nuclear bomb. Never having watched “24,” I do not know Bauer’s precise interrogation techniques (they are not listed on Wikipedia), but Scalia is evidently a big fan. Based on his close analysis of the television show, he once told the BBC that “it would be absurd to say that you can’t stick something under the fingernails” of a detainee. That would not be punishment, according to Scalia – so no worries about “cruel and unusual” per the Eighth Amendment – if it was done solely to encourage volubility.  These issues could easily come before the Supreme Court in any number of ways, so it is especially unfortunate that Scalia has already announced his opinion on the basis of a drama series.

Then again, I suppose we should be relieved that Nino (as he is called) has looked to television for moral guidance, rather than film.  Otherwise, he might have explained that torture should be allowed to save the life of John Connor, and thus prevent the “Rise of the Machines” (think "Terminator 3").  Or perhaps the FBI should be free to torture a U.S. congressman into revealing that he is a brainwashed foreign agent (think "The Manchurian Candidate," either version).  The Hollywood possibilities are endless, and they can all be used to rationalize the torture of made-up people in order to achieve extremely noble, if wholly implausible, goals.

It is deeply unsettling that a Supreme Court justice could be so cavalier about torture – including needles “under the fingernails” – although, thankfully, Scalia did allow that it is not “an easy question.” And frankly, it could have been much worse. Scalia might have taken his moral cues from Dick Cheney. At least Jack Bauer had a few qualms.